Gretna Historical Society was founded in 1969 by volunteer fire fighter, Lloyd George. It operates a museum at this location in a complex comprised of three Creole cottages, a Blacksmith's shop, and the Louisiana Fire Museum, which is located in the old David Crocket Fire Co. No. 1 Hall. The society also owns and maintains a caboose and train depot on Huey Long and 4th Street. The museum features fire fighting artifacts from around Louisiana. Its largest and most important is the Gould #31 Pumper, which was built in Newark, New Jersey in 1876. It is one of only twelve built before 1880 still in existence. It is also unique in that it is one of a few fire pumpers located in its original fire hall. The pumper and the fire hall are jointly listed on the National Register of Historic Places, with the hall serving as the historic setting for the pumper.

The Gretna Historical Society and Museum was founded in 1969. 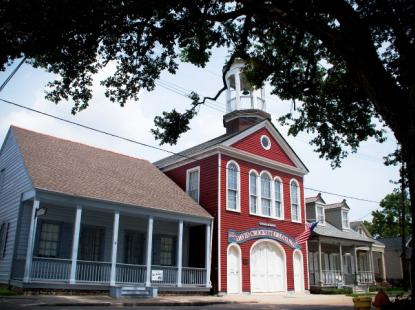 The pumper, which weighs 3,000 pounds and could spray 250 pounds of water per minute, was first pulled by fire fighters and then by horses which were acquired later. The pumper was used until 1928. The hall itself was built in 1859 and remains the oldest, continuously operating volunteer fire fighting companies in the country.