The Monticello Arcade is a historic Beaux-Arts style shopping arcade in downtown Norfolk, Virginia. Built in 1907, this structure is the oldest of only two such shopping arcades in the state. The adjacent Selden Arcade, which opened in 1931, was constructed following the success of Monticello. These shopping arcades, uncommon in the southern United States, serve as unique examples of 20th-Century commercial architecture. Today, the Monticello Arcade serves as office and retail space for businesses. It is also listed on the National Register of Historic Places and designated on the Virginia Landmarks Registry.

The interior of the Monticello Arcade as it appeared in 1986 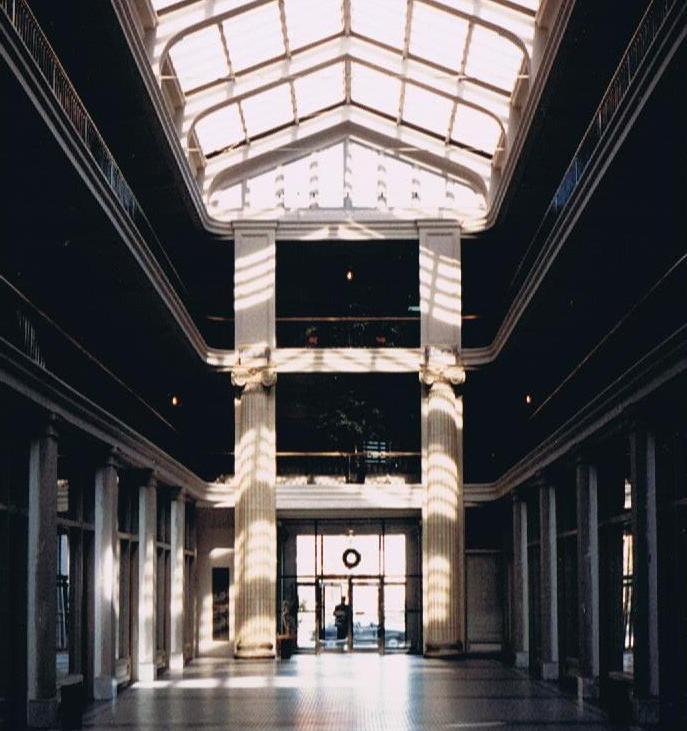 The term "shopping arcade" is, to some, synonymous with the term "shopping mall." The shopping arcade, however, also denotes a specific style of commercial building which was particularly popular during the 19th Century. These arcades, typically covered by a series of arches supported by columnns or piers, are considered by some to be the antecedent of the modern shopping mall.

Though rare outside of Europe and the northeastern/midwestern United States, downtown Norfolk is home to two such arcades; the Monticello Arcade and the Selden Arcade. The Monticello Arcade is the older and more distinguished of the two. It was constructed for real estate agent and attorney, Percy S. Stephenson, to accommodate the anticipated surge in visitors during the 1907 Jamestown Ter-Centennial Exposition.

Designed by a local firm, Neff and Thompson, the three-story, Beaux-Arts style Monticello Arcade forms a protected pedestrian passageway between City Hall Avenue and Plume Street. The land on which it was built was created by the filling of the Town Back Creek in 1905. Monticello Arcade is a steel-framed building with a facing of molded and polychromed terracotta. The facades are seven bays in length, composed of two-story Ionic order columnns, and topped with an elaborate cornice. The longitudinal mall is illuminated by a gabled skylight.

Owing to the success of the Monticello Arcade, an attempt to extend across Plume Street led to the construction of a smaller, more modern arcade. The Selden Arcade, named after a prominent local family, was built to a conservative Art Deco design and opened in the April of 1931. Both arcades, however, fell into decline by the 1940s following the development of outward shopping centers. In the 1960s, Selden Arcade's limestone facade was stripped and replaced with Black and white tile.

The Monticello Arcade is largely unaltered from its original design. It was threatened with demolition in 1974 when the city put forth a proposal to extend Monticello Avenue to the waterfront. Instead, citizen activism resulted in its nomination to the National Register of Historic Places. Both structures have since undergone partial renovations. Today, the Monticello Arcade is used as retail and office space.