San Jose's Electric Light Tower was constructed in 1881 at the urging of J.J. Owen, publisher and editor of the San Jose Daily Mercury, in the hopes of lighting the downtown area with electricity rather than gas street lamps. Though it failed to live up to the demand, the tower became a landmark recognized throughout the United States, and it was even claimed that the Eiffel Tower was modeled after San Jose's Electric Light Tower. The original tower was destroyed in a gale in 1915 [1; 2; 4]. The replica in History Park is a half-size model at 115 feet high, scaled to fit into its surroundings [2; 4]. 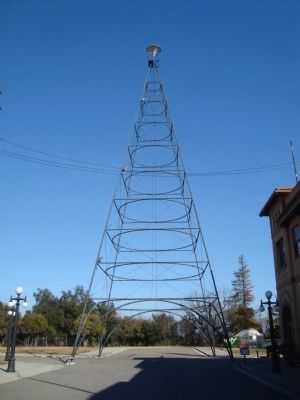 The original electric tower in downtown San Jose, 1881 (image from the City of San Jose) 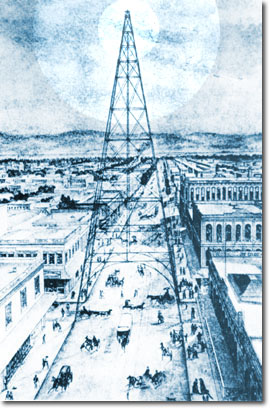 The tower in 1905, with San Jose's old City Hall in the background (image from the City of San Jose) 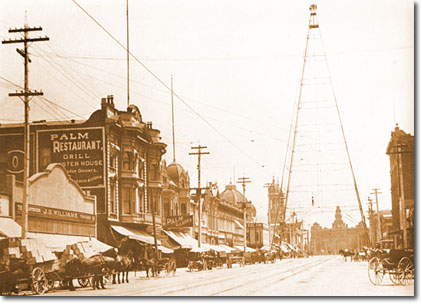 Postcard of the light tower and Market Street, 1910 (image from the City of San Jose) 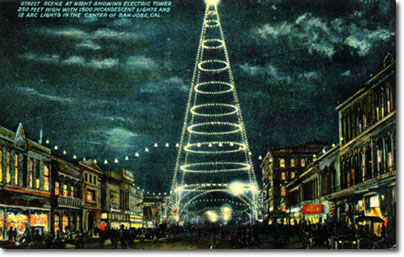 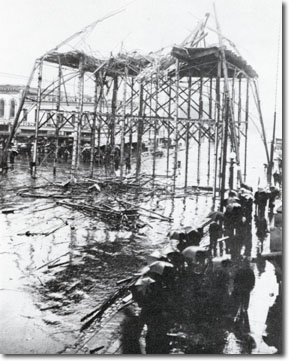 The man behind the San Jose Electric Light Tower was James Jerome Owen, born the son of a New York farmer in 1827 [1; 3]. After training and working as a printer in his native state, he attempted to reach California in 1850, but found himself caught in the middle of a conflict between the United States and Panama along the way. Eventually, Owen did get to California, where he worked as a messenger for express companies including Wells Fargo, but moved back to New York to be with his family, working for eight years as a farmer, teacher, school superintendent, and as a representative in the New York Assembly, as well as serving as Chairman of Military Affairs [3]. In 1861, Owen moved to San Jose, California, where he became editor and publisher of the San Jose Daily Mercury, as well as a member of the California Assembly [1; 3]. His family joined him two years later, settling permanently in San Jose [3].

The history of the San Jose Electric Light Tower began on May 13, 1881, when Owen ran an editorial proposing the idea of a high, powerful electric light source be erected downtown to replace gas street lamps, even offering his own design for the project [1; 2; 4]. Gas lamps had only been installed twenty years before, and naturally, gas companies and their employees objected to the idea. Owen was known for keeping his critics at bay with his cane, and his idea was heartily supported by the majority of San Jose's citizens; by the end of the year, the 237-foot tower boasting 24,000 candlepower stood at the corner of Santa Clara and Market Streets [1; 2]. The tower was lit for the first time on December 13, 1881, and although it provided insufficient lighting for the downtown area, it nonetheless earned San Jose the distinction of being the only city west of the Rocky Mountains with electric lighting [1]. The tower proved impressive enough to earn the title of the "Seventh Wonder of the West," and was considered a landmark across the nation [1; 2]. The electricity was supplied by a steam-powered generator used by day to run Thomas Gillespie's planing mill on El Dorado Street, and by night to light the tower. Within a few years, the tower was only lit for weekends, holidays, and festivals, but it remained a favorite of many locals and a landmark of the city. Police officers enjoyed walking the "Tower Beat" due to the strange fact that ducks frequently collided with the tower and could be collected and sold to local restaurants; patrons of nearby saloons, particularly the Tower Saloon, enjoyed (or perhaps were dared to) climbing the tower. Of course, those who initially criticized the idea continued to criticize the structure itself, calling it a white elephant or "Owen's Folly," [1].

In February of 1915, a windstorm damaged the tower, which collapsed entirely on December 3 of the same year during a gale force wind [1; 2; 4]. The Tower Saloon stood as the only reminder of the Electric Light Tower, until the saloon itself was demolished circa 1960 [1]. The history of the San Jose Electric Tower had one last quirk in 1989, when San Jose, claiming that the design of their tower was stolen by Alexandre Gustave Eiffel for the creation of Paris' Eiffel Tower (built 1889), charged the city of Paris with copyright infringement [1; 2]. The bizarre trial that ensued included heated insults from both sides toward each others' city towers, and ended in favor of Paris [1].