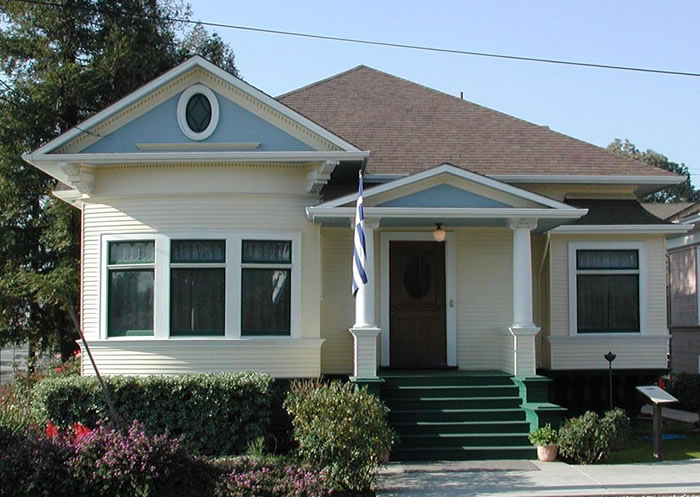 History of the House and the Hellenic Heritage Institute

The 1905 neoclassical Nelson-DeLuz House originally stood at 11th and William Streets in San Jose, becoming the family home of Etta and John Nelson in 1919. John Nelson worked for the Southern Pacific Railroad, and he and Etta had four children, including Kristena Nelson. After graduation from San Jose State College, Kristena spent the Second World War serving as a dietitian, and married Lawrence DeLuz in 1946 [2; 3]. The couple returned to the Nelson house in San Jose, and Kristena Nelson-DeLuz volunteered at the San Jose Historical Museum for many years before it developed into today's History Park [2]. In 1987, she bequeathed her family home to the Museum, and the Nelson-DeLuz House was moved to History Park [2; 3].

Classical features, such as the porch pillar capitals, dentils, and plaster ornamentation, were preserved during the restoration, which included painting the house in its earliest color scheme. Based on the style and layout, it is thought that the local firm of Wolfe and McKenzie designed the house. Once restored, the bungalow became, from 1993 until 1999, an exhibit space for a particular interest of Kristena Nelson-DeLuz's: textiles [2; 3].

Meanwhile, in 1963, a Greek folk dance group called the "Demotic Dancers" had been founded by Marina Moustakas, along with other faculty wives of San Jose University. The dancers performed at a variety of events, including the city's first Greek Culture and Food Festival, which took place in 1971. This festival helped to inspire a broader focus for the Demotic Dancers through cultural exhibits about traditional Greek life and activities. The group became the non-profit organization Hellenic Traditional Arts Institute in 1989 under Larraine McBride's leadership, focusing not only on dance, but also on Greek traditional dress, music, singing, folklore, and history [1]. Ten years later, the organization became the Hellenic Heritage Institute, which partnered with History San Jose to create the Hellenic Heritage Museum, located in the Nelson-DeLuz House since 1999 [1; 3].

The Hellenic Heritage Museum features cultural exhibits and displays, paintings and portraits, photography, textiles and folk costumes, historical artifacts and home furnishings, and religious pieces. The interior is modeled after a traditional Greek nobleman's home. The Institute also offers educational classes and workshops in Greek language, cuisine, and dance, and continues to provide live performances at special events and festivals [1].

Saturday/Sunday, 12-4 or by Appointment