Three miles to the east of this marker was the site of the stockade for called Fort Stoddert, which was built in 1799 to protect the Mobile River and the southern border of the United States. It was also the southern terminus of the Federal Road, which allowed people to move into new territories, often inhabited by Native Americans. The fort is known for its imprisonment of the infamous American politician, Aaron Burr, who served as Vice President under President Thomas Jefferson's first term, which ended in 1805. Burr is most known for fatally wounding Alexander Hamilton in a duel on July 11, 1804. On February 19, 1807, Burr was arrested and incarcerated here for treason: he was accused of raising troops to attack the Spanish territories to the west (the land that comprises what is now known as the Louisiana Purchase), among other accusations. He was eventually acquitted of the charges in September of that year.

The Fort Stoddert historical marker. The actual site is located three miles to the east. 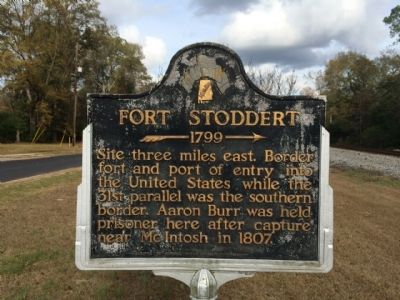