The Hatton Ferry is the last poled ferry still in operation in the United States. Located about 5.5 miles west of Scottsville, the poled cable ferry has transported people and vehicles across the James River since the late 1870s. It crosses the river upstream between Albemarle County and Buckingham County. Today, Hattfield Ferry operates on a weekend schedule from early April to the end of October; the ferry rides are free of charge, although a small donation toward the maintenance of the ferry is requested. 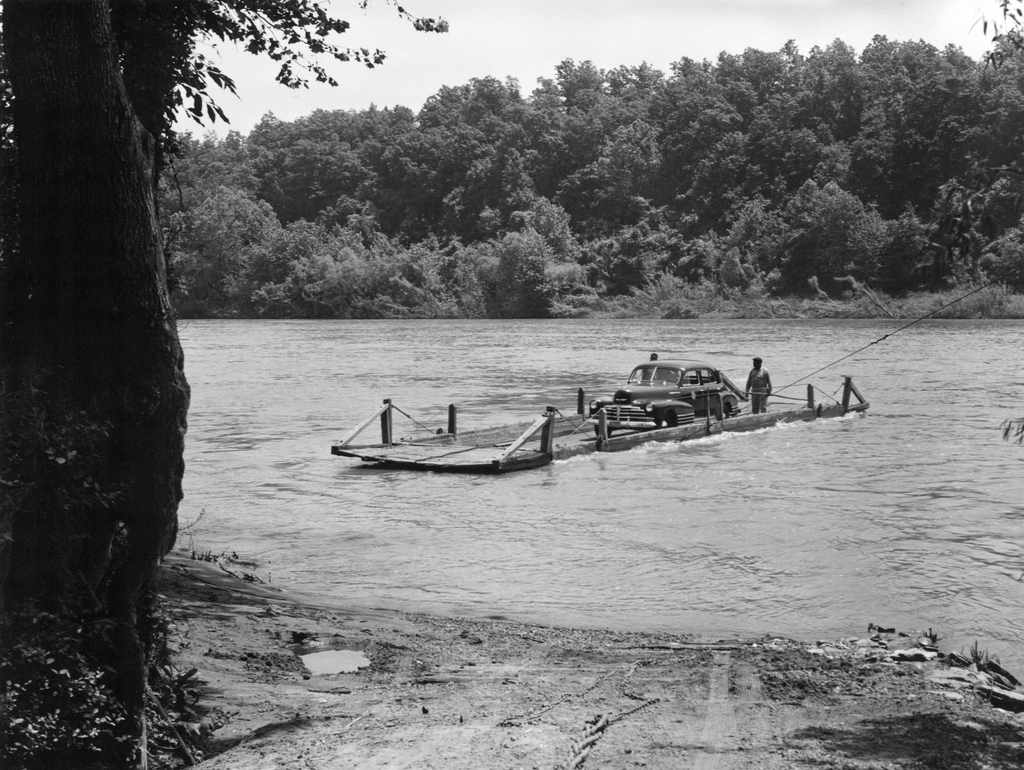 Hatton Ferry is a poled cable ferry five and a half miles west of Scottsville, VA. It is located on the James River and crosses upstream between Albemarle and Buckingham Counties. Capable of moving both people and vehicles, Hatton Ferry is the last poled ferry still in operation within the United States. It is named after Frank Hatton, the assistant U.S. Postmaster General in the late 1800s.

The history of the ferry can be traced back to the late 1870s, when Buckingham County authorities issued a court order to maintain a public ferry on the James River. James A. Brown purchased the land and opened a store and ferry at this location. Brown's store was a hub of transportation and commercial activity—so much so that the store became a stop on the Richmond and Allegheny Railroad in 1881. The ferry was a vital transportation link between the two counties. In 1914, James B. Tindall purchased the properties and rights associated with the ferry from Brown's descendants. He operated Hatton Ferry until 1940, when he deeded it to the State of Virginia.

Originally, the ferry's traffic included of wagons, buggies, horses, cattle, sheep, farm equipment, lumber, and produce. The ferry was manned on a daily basis from "sun to sun." Ferry operators were paid a salary, and also received groceries, flour, and sugar as compensation. They had to be quite skilled, as ferry boats are prone to sinking if improperly loaded, or whilst navigating strong currents. For example, one disaster was averted on a ferry carrying a load of timber and two donkeys. One of the animals tried to take a drink from the river, unbalancing the load. The ferryman was forced to cut the lines between the pair of donkeys, thereby saving the cargo. Another ferry operator, Harvey Briddle, is perhaps the most well-known ferryman. Briddle, who started his employment in 1932, nearly drowned during a harrowing ordeal in which a ferry was destroyed during a flood.

Following its acquisition by the State of Virginia, the Virginia Department of Highways assumed operation of the ferry as part of the state system of highways. By 1970, however, talks of budget cuts threatened the future of Hatton Ferry. The destruction caused by Hurricane Agnes in 1972 almost ended service for good. Citizen activists campaigned for restoration and, in 1973, the Virginia Department of Transportation dedicated a new ferry.

The ferry itself is a flat-bottom boat. Its deck is only a few inches above the waterline. Two cables attached to each end of the boat guide it along an overhead wire, which connects the riverbanks. The length of the crossing is approximately 700 feet in total. As the boat approaches the bank, a ferryman cracks a hand winch to retract the cable at the stern of the boat, and then uses a pole to guide the boat into its landing; this is to accommodate the listing caused by the current.

The Hatton Ferry is open on a seasonable basis, offering transport for people and vehicles on the weekends (river levels permitting). In 2009, when the Virginia Department of Transportation ceased funding, ownership transferred to the Albemarle Charlottesville Historical Society. It is now managed by the non-profit "Hatton Ferry" group. Passage on the ferry is free, although a small donation is requested to support its continued operation.

Saturday: 9:00 AM–5:00 PM Sunday: Noon–5:00 PM *Ferry rides are available from mid-April to the end of October and at other times by special arrangement.