In September 1779, Spanish Territorial Governor Bernardo de Gálvez and his force of about 1,200 men arrived in Louisiana to attack the British at Baton Rouge at an earthen fort at the same site as the Pentagon Barracks. Just a few months earlier Spain declared war on Great Britain which opened up a second front of the war in what is now the American south. Rather than attacking the fort directly which likely would have resulted in a large number of casualties, Gálvez implemented a diversionary plan: he sent a detachment to draw the British fire while he had his artillery detachment build a battery—just near this marker—consisting of six cannons roughly 1,000 yards to the south. The British realized the battery was there in the morning but could not successfully return fire. After a few hours the Spanish guns took a heavy toll on the fort, forcing the British commander to surrender the fort as well as Fort Panmure in Natchez, Mississippi (the Spanish gained control of this fort at a later date). 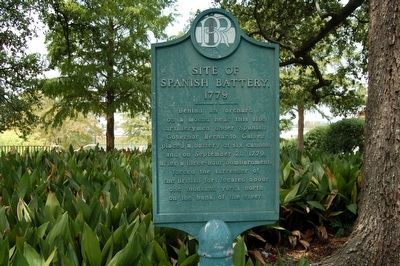 Gálvez's force was very diverse. It consisted on free Blacks, Native Americans, Germans from Louisiana's Acadian community, Spanish soldiers, Mexicans, and volunteers from the American colonies. The men were mostly volunteers and untrained, which is one reason why Gálvez chose not to assault the British fort directly.