This fort is a replica of Fort Christmas, which was built by the US Army during the Seminole Indian War. The replica is a recent creation, built to mirror the original fort which was built by soldiers and recruits on December, 25, 1837. The Second Seminole War was the most deadly conflict in American history prior to the Civil War, lasting from 1835 to 1842. The fort includes guided tours, museum exhibits, and areas for outdoor recreation. The Orange County Parks and Recreation Department built the replica fort as part of Florida's celebration of the nation's bicentennial in 1976. 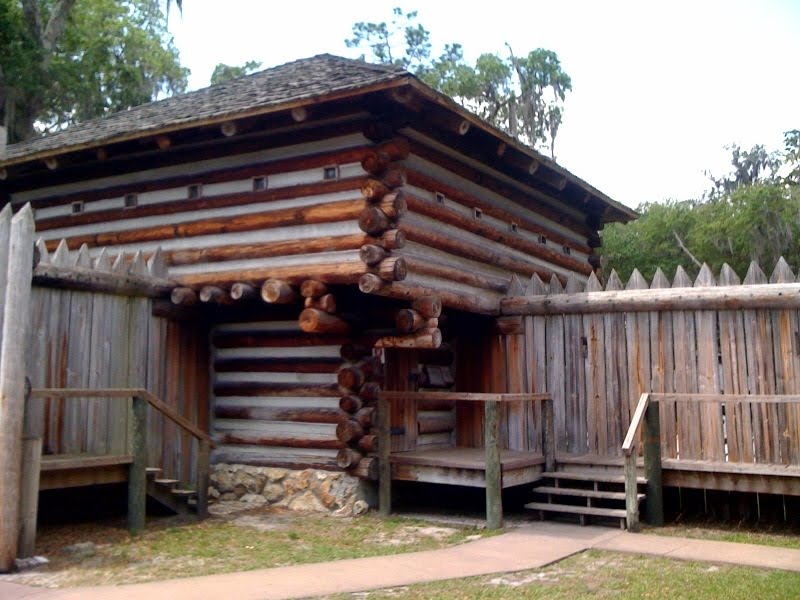 The fort includes numerous exhibits as well as this historic marker. 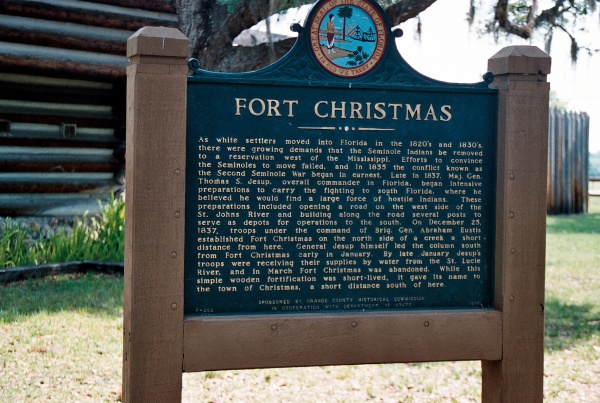 The interior of the fort includes exhibits related to military life and the experience of early 19th century settlers. 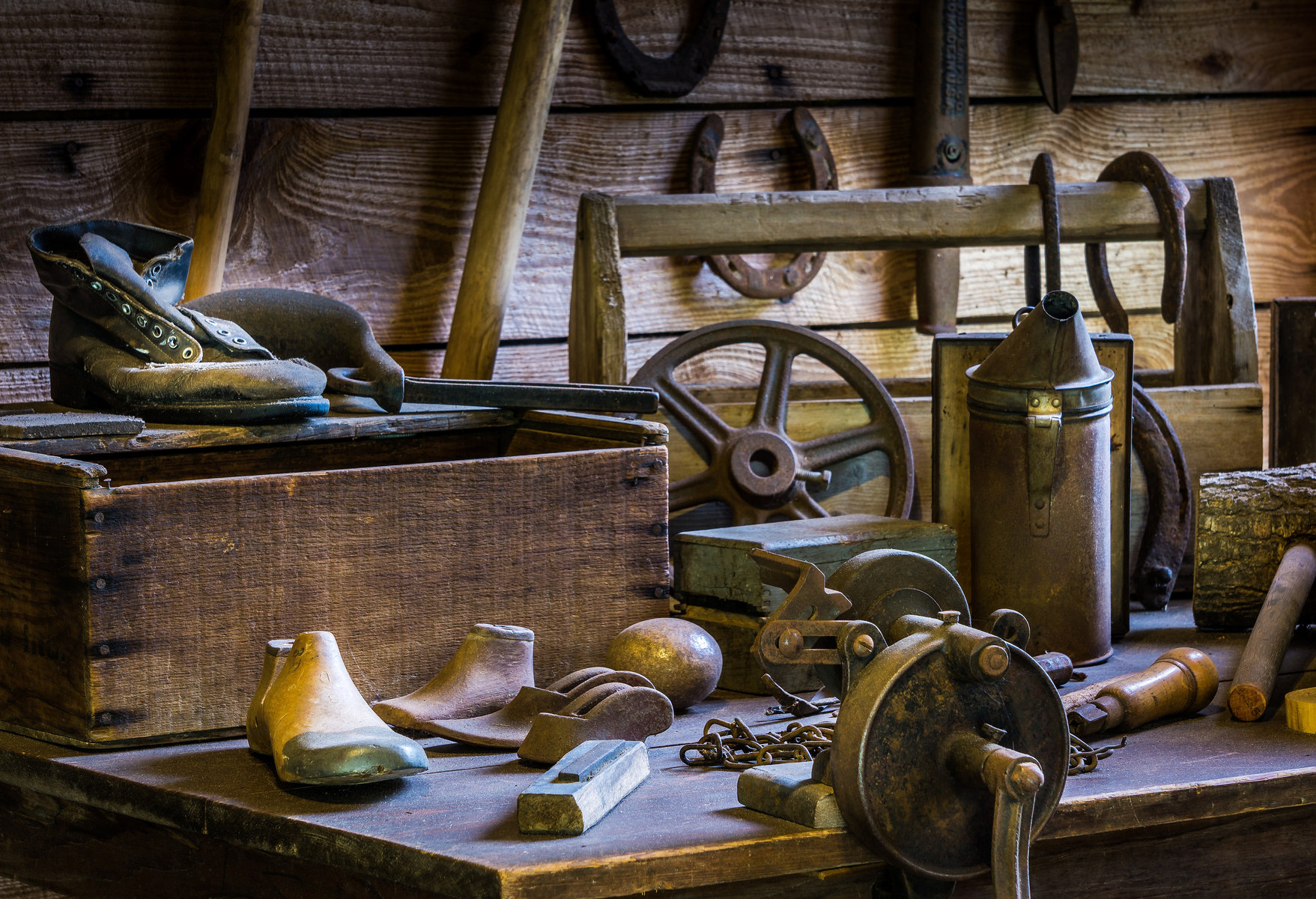 The History of Fort Christmas is rich with information and events. During the 1830’s and 1840’s there was an ever-increasing migration of white settlers into Florida.  Due to the continuous increase of settlers, the demand to remove the native Seminole Indians to a reservation west of the Mississippi was also rising. In 1832 a council was called amongst the American government and the treaty of Payne's Landing was signed in order to move the Indians to a Territory west of the Mississippi River (Fort Christmas Historical Park). Most of the Seminoles did not agree with this treaty and a resistance began to boil under the leadership of Osceola. Osceola refused to sign the treaty and instead he took his knife and stuck it into the document. In retaliation General Thompson had him arrested and imprisoned (Fort Christmas Historical Marker). Osceola was released after fooling the white men into believing that he would sign the treaty. From the moment he was released he would start to form a more formal resistance against the whites.  In 1835 all hell broke loose because of one ambush by the Seminoles. Fort King was a major stronghold for the American army and was in desperate need of reinforcements. So, on December 23, 1835 about 100 men and officers left Fort Brooke for Fort King enduring a 100-mile march. At some point during the long march the group of soldiers were ambushed and massacred. All but three of the 111 men were killed and scalped. This event, known as the Dade massacre is considered to be the starting point for the Second Seminole war (Fort Christmas Historical Park).

After two years of mild success by the American forces more intense measures were needed to push the Seminoles further back into Florida. In 1837 General Thomas Jesup (the leading commander in Florida) decided to prepare to move his forces south, where he believed a stronghold of Seminoles were. In preparation for the trek, the general opened a road on the west side of the St. Johns River and built a plethora of posts along the road to serve as armory’s for operations to the south. On December 25, 1837, commander Abraham Eustis and his troops established Fort Christmas. The fort was made from wood and was used to store ammo, guns, and rations. It was right across a creek from an Indian village that was abandoned.  We know this from the journal kept by Captain Jarvis.  In his journal He wrote that “he rode his horse into the Indian village and was immediately covered by fleas, so he made a retreat” (Fort Christmas Historical Park). General Jesup eventually led troops south from Fort Christmas early in January. By late January supplies were being distributed by water on the St Lucie river and the fort was no longer needed. In March 1838 the fort was decommissioned and was left to rot (Fort Christmas Historical Park). Although the fort did not endure any major events or warfare during the second Seminole war it was still an important supply depot for Jesup's army. The town of Christmas, Florida was named after the fort and a replica park was built to restore the historical nature of the Christmas area.

In 1977 Orange County Parks and Recreation Department and the U.S. Army Corp of Engineers constructed the replica fort Christmas at the then-Picnic Grounds. It was completed in December 1977, 140 years after the original Fort Christmas was completed on a site approximately one mile north. Along with the reconstruction of the fort, they eventually made a park and added the seven cracker houses and the museum. The houses and museum are meant to show the way the crackers lived during this time period. Within the museum there are countless amounts of artifacts and replica clothing items such as 1800s military uniforms and traditional Seminole wardrobes. The cracker houses are interpreted to show pioneer life from the 1870s through the 1930s. Key themes are homesteading, cattle, citrus, hunting, fishing and trapping. The houses and structures you are able to see at the park include, the replica of fort Christmas, the union school (1902), the lunch room (1932), the wheeler house (1905), brown house (1904), and the Yates house (1890). All of these structures are fully restored and safely accessible (Fort Christmas Historical Park).