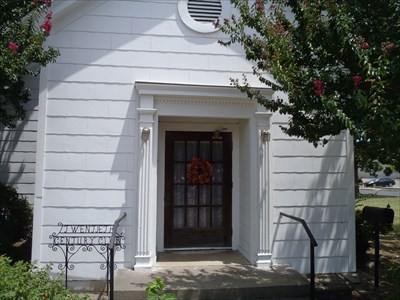 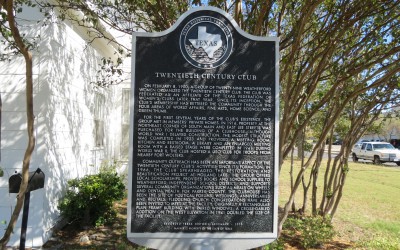 The Twentieth Century Club of Texas is the oldest federated women’s club, established over one hundred years ago.  It is an entirely benevolent organization whose goal is to give back to the community through donation and action.  What began as an organization of twenty-nine women from Weatherford, Texas is still in existence today.1

Less than a year after its organization, the Twentieth Century Club was federated as an affiliate of the Texas Federation of Women’s Clubs (TFWC).  The TFWC is the largest voluntary association of women in the state and is completely non-profit.  Its purpose is to combine the efforts of women’s clubs for the improvement of education, home life, public affairs, the arts, and Texas heritage.2

For the first several years of the Twentieth Century Club’s existence, the group met in the homes of its members.  In 1916, they purchased the property on the corner of Main and Lee street to build the clubhouse where meetings are still held today.  The structure was completed in 1923, and provided the club with a meeting room, a kitchen, and a restroom.  In 1941 a library and a meeting room with an enlarged stage were added.  During World War II, the club hosted a USO club for troops from nearby Fort Wolters.3

The role and membership of the Twentieth Century Club and the Texas Federation of Women’s Clubs have changed over time.  In the early 1900s membership consisted largely of homemakers and teachers.  Today’s clubwomen include several women who work outside of the home.  Although it continues its efforts in public affairs, many of their original projects have become government responsibilities. The group provides local scholarships, books and school supplies to the Weatherford Independent School District, and supports a different community organization each month such as Meals on Wheels and Dental Health for Parker County.4