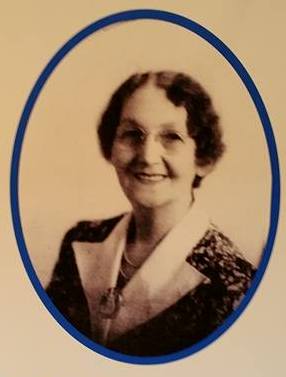 Mollie Wright Armstrong was born in Bell County, Texas on January 23, 1875, to Thomas and Elizabeth Wright.  She briefly attended Baylor Female College where she met her future husband, Walter David Armstrong.  After they married in 1892, they moved to Brownwood, Texas.  Her husband was a watchmaker, and he and his brother opened a store, and as was custom for general stores at the time, it inventoried eyeglasses.  Mollie’s interest in optometry began in this store when a traveling salesman prescribed her with eyeglasses that eventually cured her of chronic headaches.1

She completed a correspondence course through the Kellum and Moore School of Optometry, excelled in her studies, and finished her degree in Refraction at the Atlanta, Georgia campus of the school in 1899.  She returned to Brownwood and opened an optical department in the family store, making her the first female optometrist in the state of Texas and the second in the United States.2

She played a vital role in the 1921 passage of Texas’ first optometry law, the law governing the profession.  She became a member of the Texas Board of Examiners in Optometry and served as President and Vice-President of the board for twenty-four years.  She was President of the Texas Optometry Association (TOA) from 1923 to 1925, and also served later as their director of publicity.  According to optometrist and author Weston A. Pettey, “Dr. Mollie had an uncanny ability at securing publicity for optometry.”3  When the Texas Optometrist, a publication by the TOA, was first released Armstrong was their first editor.  It was because of her work that the first optometric professional liability policy was made available to optometrists nationwide.  This effort afforded the opportunity to became a trustee of the American Optometric Association.  In 1927 she organized the Texas Woman’s Auxiliary to the American Optometric Association and was appointed a regional director of that auxiliary.4

Mollie was also active in civic affairs in Brownwood.  She organized the American Legion Auxiliary, the Business and Professional Women’s Club, and the Civic League of Brownwood.  She also served as director of the Brownwood Chamber of Commerce and represented her district as a member of the State Democratic Executive Committee.5  She served in these capacities until her death in 1964.

A historical marker was placed outside the optometry office of Dr. Randy Ethridge in Brownwood, Texas in 2008.  B.J. Avery, executive director of the Texas Optometric Association in Austin, said at the dedication of the marker, “She (Mollie) would be pleased and proud to know where this profession has gone.   Mollie wasn’t about gender.  She just did what she thought she needed to do.”6