Dedicated in 1920, Jacksonville's Civil War Monument is dedicated to the memory of the men of Morgan County who enlisted in the United States army as well as women and other local residents whose service and sacrifice helped the Union win the Civil War. The statue is capped by Columbia, a female figure who serves as a metaphorical representation of the United States in many sculptures throughout the country. On the west side of the statue, one finds another female image which commemorates the sacrifice of local women during the Civil War. This monument is located in the center of the downtown square of Jacksonville alongside many other monuments, historic markers, and local landmarks.

This monument was dedicated in 1920 and honors the men and women from Morgan County who sacrificed on behalf of the Union. 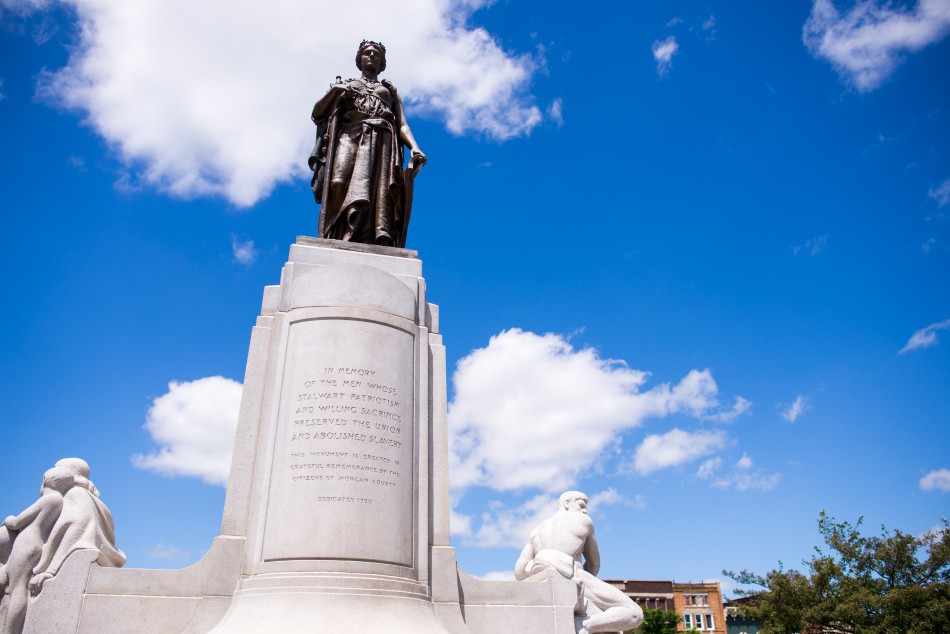 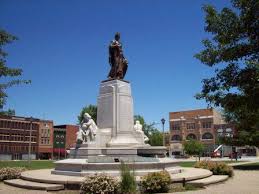 Dedicated in 1920, Illinois, the Civil War Monument is a tribute to all of those from Morgan County who enlisted and helped the Union win the Civil War. The monument bears the names of soldiers who lost thier lives in the war. The granite monument features a copper statue of Columbia that was made by Leonard Crunelle, a sculptor who studied under the famous Chicago artist Lorado Taft. The east side of the statue includes a tribute to men who fought in the army while the west side of the statue commemorates the sacrifice of women from Morgan County.

The Civil War was important inJacksonville, as demonstrated by the fact that Illinois College is known by the nickname of the Blueboys and Lady Blues. A “Blueboy” was known as a Union soldier back in the time of the Civil War. Illinois College took on this nickname due to the fact that two hundred and forty students, which was the class of 1843, enlisted to fight for the Union Army during the Civil War. Not only does the school have those ties to the Civil War, but the town also included stops along the Underground Railroad. For example, one marker related to the Underground Railroad can be found at Beecher Hall on the campus of Illinois College.

On one of the sides of the monument it states, “In Memory of the men whose stalwart patriotism and willing sacrifice preserved the Union and abolished slavery. This monument is erected in grateful remembrance by the citizens of Morgan County: dedicated 1920.” Near the monument, one can find a number of benches, some of which are made of re-purposed Ferris wheel seats that were made by a local Jacksonville company.

In 2009, the downtown area as well as the Civil War monument saw many renovations. Many local volunteers and veterans of the General Grierson Society helped renovate the monument by power washing, remounting the slabs with all of the names, scrubbing the quotes to make them readable and also getting the fountains to work as well. With that being said, Jacksonville doesn’t only show sacrifice in this town, but they take pride in what they have. Having volunteers willing to work for days, weeks, months or even years to restore the true authentic identity says a lot about the people within the town.