The Rock of Ages Granite Quarry is a quarry in Barre, Vermont that is the granite quarry in the city known for granite. Barre produces a signature type of granite that is very easy to carve, and work with, and the Rock of Ages is one of the big quarries in the area. This quarry was started in 1885, and is still active today. The Rock of Ages Quarry not only supplies granite, but it also makes memorials and monuments. 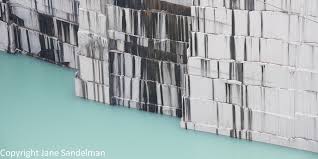 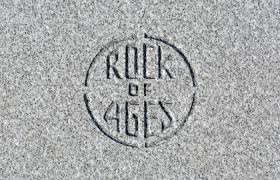 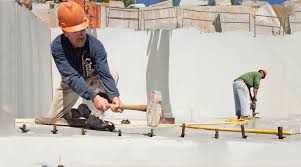 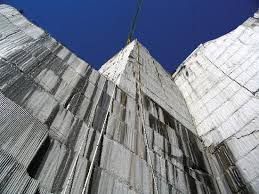 The Rock of Ages Granite Quarry is a granite quarry that was founded by George B. Milne, James Boutwell, and Harvey Varnum, in Barre, Vermont. The granite quarries were formed at the same time as when the earth was formed, and the finest granite just so happened to wind up where Barre, Vermont is now. “The new planet shrank as it cooled, building up enormous pressure at its core and forming an’outer crust. During this process—in a complex succession of violent contractions—pent-up gasses and rocks rose to form the surface of the earth while the molten rock deep in the earth’s core continued to cool and solidify to form granite (igneous rock), marble (metamorphic rock) and sedimentary rock.”1 This process allowed Milne, Boutwell, and Barnum to form what the Rock of Ages Granite Quarry has become. Because of the earths formation, and the way the pressure formed the rocks, Barre granite is popular, easy to work with, and looks nice.

One of the biggest setbacks that the granite industry had to overcome was transportation. The granite industry was going no where until the contract to build the Vermont State House was signed, but even after that the granite industry was facing a major setback. Moving these large blocks of granite from the quarries to the sites that were using the granite was a big problem that could have stopped the granite industry all together. Thanks to railroads and the people of Barre, transportation became far more reasonable and far more effective. “The Montpelier and Wells River Railroad offered to build a spur between the main railroad line and Millstone Hill if Barre residents bought $40,000 worth of railroad stock to fund the project. The offer was quickly accepted and filled.”2 Now the Rock of Ages was not formed until after the railroads were built to help with transportation, but had the railroads not been built, The Rock of Ages might not have formed into a company.

The Rock of Ages Granite Quarry got bigger and bigger as the years went on. The company expanded by buying new equipment that would help them produce more granite in less time, and by buying different companies. “In 1956 the company purchased the Ezra White granite firm and its patent rights to the Rosary cutting process. In 1957 the Bethel, Vermont-based quarry was reactivated to provide the white stone popular as building material in western Europe and highly prized by architects.”3 This approach to the industry put them ahead of their competition in a few ways. They bought competing companies and their patents to become a bigger company with the best tools and the best methods to produce solid, good quality products. “During 1969, Rock of Ages itself was purchased by Rhode-Island based Nortek, Inc., a mini-conglomerate with diversified holdings. That same year, Rock of Ages installed a custom-designed 160-foot steel derrick that allowed for the quarrying of rough granite blocks weighing over 150 tons.”4 This was another way the company tried to beat their competitors. By selling the company, they made enough money to buy the steel derricks that allowed them to produce more and more granite, putting them ahead in the industry. The Rock of Ages, that used to only produce blocks of granite now makes memorials, monuments, and gravestones. “During 1977, harsh winter weather severely impacted Nortek subsidiary Rock of Ages’s quarrying operations but in 1979, Rock of Ages more than doubled its operating revenue to $3.7 million; net sales of $20.7 million were up 25 percent from 1978, according to an article published by the Boston Globe on April 20, 1980.”5 This company very clearly prospered because of new technologies and limited competitors.