St. Stephen's Episcopal Church, built in 1769 after two years of construction, is one of South Carolina's most unique churches and an excellent example of Georgian architecture. Like other churches built in the 18th century, St. Stephen's is a one-story, rectangular structure but features many unique elements. These include doric pilasters, a high Gambrel roof, Jacobean curvilinear gables and an ornamental tray ceiling. Its architecture and age are the primary factors for its designation as a National Historic Landmark (1970). It is an active Episcopalian parish. 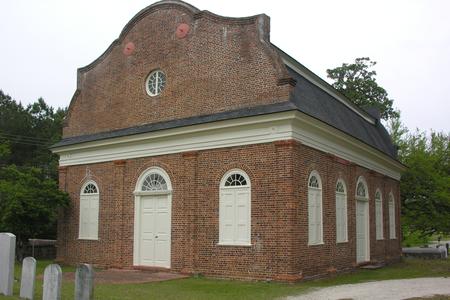 The Episcopalian Church was founded in South Carolina 1706 under the jurisdiction of the St. James Parish. In 1754, part of it was separated to form St. Stephen's Parish. A wooden church was built soon after but this was eventually replaced by the brick church. Services discontinued in 1808 but the building was not ignored as it underwent two renovations, saving it from demolition. Services began again in 1932 and have continued ever since.