This National Historical Landmark was once home to Coker Experimental Farms and Coker’s Pedigreed Seed Company, founded in 1914 by agricultural scientist David Coker. It was here that Coker created new and improved existing varieties of crop seeds and developed the first cotton-breeding program in the United States. Coker was also a strong proponent of educating farmers about these new developments as well improved farming techniques and technology (this concept of educating others in the industry is called "agricultural extension"). Today, the property features a museum that is a replica of the company’s original dairy barn, which features exhibits exploring the impact Coker's discovery had on southern agriculture. The museum, which is called Coker Farms, hosts a variety of festivals and activities throughout the year, including an annual fall festival.

Coker Farms (Photo courtesy of the City of Hartsville, SC) 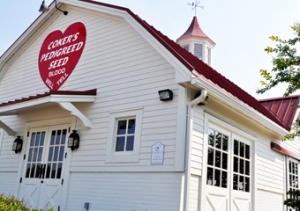 David Coker followed in the footsteps of his father, James, who served as Major in the Confederate Army during the Civil War (for the rest of his life he was called by the nickname, Major). James studied agricultural science at Harvard and at the Citadel before the war. He was responsible for introducing scientific methods to farming and experimented with crops. David continued these developments, helping propel the agricultural industry in the South to grow substantially.