Silver Reef is an old mining town located outside of St. George, Utah. This town was established in the late 1800s by John Kemple. By 1879, there were approximately 2,000 people living there. a fire broke out and destroyed most of the businesses. This fire and mine explosions led to Silver Reef becoming a ghost town. 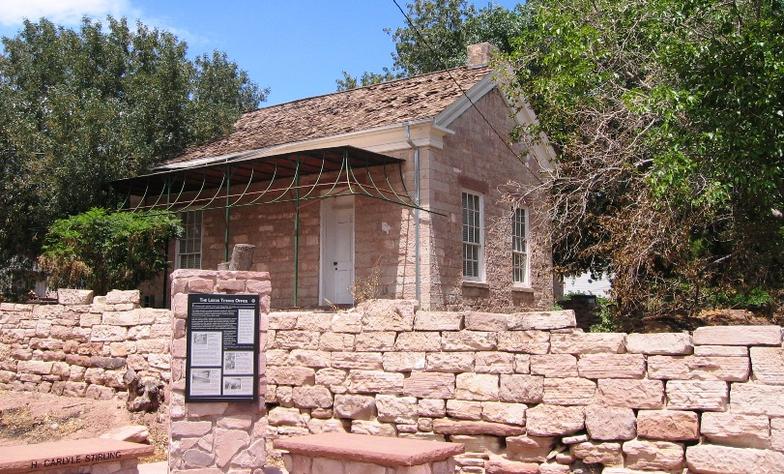 The town of Silver Reef, located outside of St. George, Utah, was first established thanks to a man by the name of John Kemple. Kemple found what he believed to be a vein of silver in the sandstone formation in Washington County, Utah. His assumptions proved to be correct, and when two men from Salt Lake heard of his findings, they sent a man to stake claims on the area. This man, William Barbee, staked 21 claims, and many miners moved out to Silver Reef to not only help him with his land, but to claim their own. In 1875, news of this new mining town reached Salt Lake City bankers, the Walker Brothers. They had high interest in investing in mining. William Tecumseh Barbee was sent by the Walker Brothers to scope out the prospects.

Several years after Barbee came to Silver Reef, nearly 2,000 people were living there. At this point, it was a booming town with many businesses and shops. However, not everything in the town was perfect. There were many issues with the miners and the mine companies. The miners formed a union and talked of striking the mines as a result of decreased pay. Soon, Barbee came the judge of Silver Reef. On the east side of Tecumseh hill, he set up a new camp, which he named Bonaza City. He writes "Bonaza City is growing so fast. It is only about three weeks old, and can boast of an assay office, blacksmith shop, sampling works, boarding housen and several other wick-a-ups of smaller dimensions, and will soon have a miner's supply store to meet the growing demands of the country". The Walker Brothers, with the advice from a mining expert, chose to stop funding Judge Barbee's operations and plans.

As the town was growing, dozens more businesses seemed to pop up. The first edition of the Silver Reef Echo was published by Joseph E. Johnson on February 24, 1877. Later, this paper was bought out by Crouch and Louder, and renamed The Miner, a more fitting name for the town. This paper bragged about the town and its accomplishments.  However, it also portrayed the bad news that was going on during this time.  Along with every mining town there will be crime. Although Silver Reef had a lower crime rate than most mining towns, there was still occurrences of murders and strikes.

On May 30, 1879, a fire broke out in a small restaurant. Many businesses were destroyed and the people were devastated. Many residents began to rebuild the businesses, but still, the town started its demise. When the miner's wages began to decrease, a lot of people packed up and moved out to find work elsewhere. However, before leaving, many miners went on strike. When their terms and conditions were not met, that is when they decided to leave. Slowly, the booming town of Silver Reef became the Silver Reef Ghost Town that we know today. When visiting, the old buildings and mines can be toured.  It is an amazing experience to be able to view this historical town