The mansion stands as a monument to the success, and influence, of the House of David religious sect, formed in Benton Harbor in 1903. The mansion enjoyed 100 rooms, and was the centerpoint to a community that also operated a bowling alley, amusement park, cruise ship, traveling baseball and basketball team, and much more. 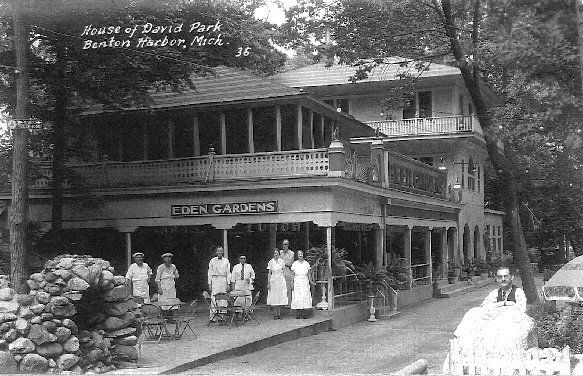 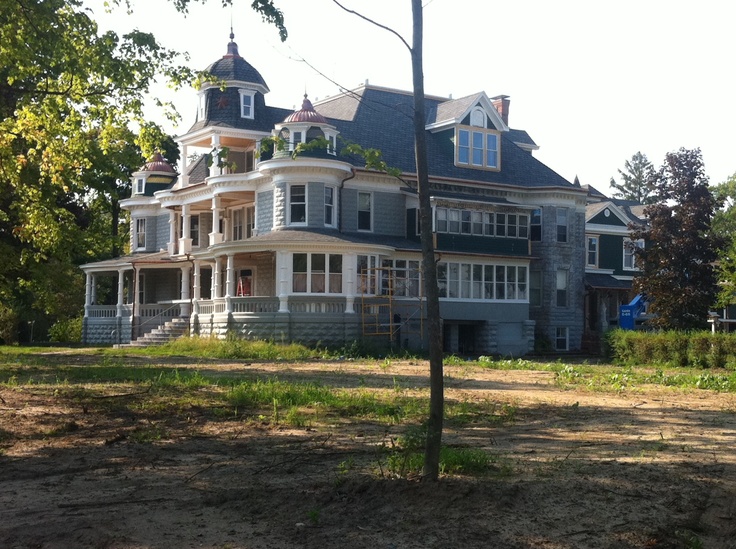 Listed on the National Register for Historic Places (NRHP), the Shiloh House is a 100 room mansion (30,000 square feet) located on the east side of Benton Harbor, Michigan. The mansion was built by the House of David religious colony in 1908, a religious sect that also operated (among other things) an amusement park and zoo, managed a traveling baseball and basketball team, ran a bowling alley -- they were the first to obtain a patent for automatic pin setters,  as well as owning a cruise ship on the Great Lakes, trolley cars, thousands of acres of farmland, and even had its own vaudeville group, brass band, and orchestra. The mansion, operations, and the land speak to the wealth garnered by the religious group who required all members to forsake all possessions to the church with the hope that eternal life would be granted.

Benjamin and Mary Purnell formed the House of David in 1903 in Benton Harbor, Michigan. Although the religion they formed promoted celibacy, the two already bore two children while living in Fostoria, Ohio, one of whom died in a firework factory explosion at the tender age of 16 in Benton Harbor. The residents of the town judged the Purnells harshly for refusing to provide a funeral for their child due to their newfound beliefs of not having anything to do with the dead. Despite those rumblings, the House of David colony grew rapidly, gaining hundreds of members and obtaining nearly 1,000 acres of land used for farming, orchards, and canning.

The Benton Harbor newspaper, the Herald-Palladium explained in 2003:

Israelite House of David members are Christians. Outsiders (called gentiles by the colonists) have sometimes confused the colony with Judaism because of its name.

The Israelites believe that Jesus' Second Coming will start his 1,000-year reign on earth. The times will be troubled and turbulent before the Millennium starts, with wars and disasters. In those days, the colony grounds will be like Noah's Ark, bringing the elect safely through.

The Israelites believe in bodily salvation for the elect. Theirs is not the only adventist or millennialist faith -- J. Gordon Melton's "Encyclopedia of Religion" classifies the House of David as an adventist faith, along with such religions as Seventh-day Adventists and Jehovah's Witnesses -- but the belief in bodily salvation is unique.

In their daily lives, the colonists practice communal living, vegetarianism and celibacy. Men may not shave or trim their beards. Each belief is backed by a Bible verse, and the Israelites believe they are emulating Christ.

The religion shares some obvious similarities to the Shaker religion, though there are evidently no direct links between the two. But they share some beginnings.

A sex scandal arose during the 1920s when Benjamin F. Purnell was accused by thirteen young women, under oath, that they engaged in sexual relationships with Purnell while still minors. His public reputation was tarnished, as several newspapers criticized him heavily. A widely-watched civil trial ensued, charging Benjamin Purnell with molestation and fraud. Although found guilty, the Supreme Court overturned the verdict. Purnell insisted he was innocent and accused the victims of being motivated by money. Inspired by an earlier financial settlement of $24,000 given to a disgruntled family within the House of David community. Purnell died eleven days after the Supreme Court’s decision, due to diabetes and tuberculosis, thus he never went through a legal trial. Nonetheless, the scandal resulted in a split within the commune; 200 people followed Mary Purnell to form Mary’s City of David and the land they purchased is near the current mansion, is also listed on the NRHP.

The mansion stands as a monument for the religious sect, but also for many of the activities that Americans have enjoyed since the Industrial Revolution -- bowling, amusement parks, zoos, music, and sports. The House of David community was instrumental in advancing many of those activities in the American culture. Nonetheless, some families did attempt to leave and even sued to regain the money they had given to the community. Couple that with the sex scandal and it is clear that it was far from a utopia.

Also, unlike many of the countless Utopian religious communities that arose during the 19th and early 20th century, such as the Oneida community, and Amana colonies, the House of David seemingly had no qualms with existed as part of the overall American culture. For them, it was a religious freedom expressed within the confines of the American legal system, as well as its broader culture.