On May 11, 1894, 4000 railroad workers organized a wildcat strike against the Pullman Company as a result of reduced wages. The workers were responsible for managing "Pullman Cars." The strike led to the formation of the American Railway Union and affected railroads across 27 states. 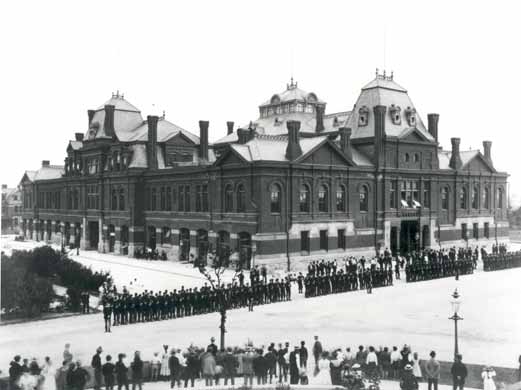 One of the most well known labor conflicts of the Industrial Revolution, the Chicago-based Pullman Strike affected the entire nation, resulting in President Grover Cleveland and the Federal Government to react, first with an injunction intended on forbidding any type of boycotts and labor walkouts, and later with soldiers sent to Chicago to enforce the law. The strike also gave a final push in the momentum that helped create the Labor Day Holiday.

The Pullman strike began on May 11, 1894 - during a time heightened economic depression, when the the Pullman Palace Car Company factory workers walked out because of failed labor negotiations. Even with the the help of the American Railway Union (ARU), no compromise could be obtained, but the ARU responded on June 20th by refusing to work trains that included Pullman cars. By the end of June, 50,000 workers went on strike and the associated Pullman boycott resulted in a shutdown of most of the nation's railroad freight and passenger traffic west of Detroit during the Summer of 1893 (June and July).

Because the labor strife and subsequent boycott affected the nation, the Federal Government felt it necessary to force workers to get the trains running again. For some, such as ARU president Eugene Victor Debs, the choice was clear -- ignore the injunction. However, he was arrested and sent to prison for his actions. The measure ultimately worked but  it came with a price; violence and vandalism frequently occurred. Nevertheless, the trains did eventually run again, and the union was broken by mid-July, notably due to the fact that the ARU could not obtain support from other labor leaders. partly because of the ARU's inability to secure broader support from labor leaders.1

The Supreme Court ruled in 1895 that the Federal Government’s decision to intervene on matters of private business was Constitutional, which coincided with public sentiment that sided with the government at that time. Even academic journals of the time noted the importance of railroads to the nation, and the fact that the workers must consider themselves servants as much as employees.2 Regardless, George Pullman who once garnered a reputation as a caring industrial leader, basically building an entire community for his workers, received much criticism for his paternalistic philosophy with regards to handling his work force. For instance, Jane Addams noted that in the Pullman community, the fixed rents paid by employee-residents were twenty to twenty-five percent higher than the rest of the city, even in the midst of the depression.3

Interestingly, in September 1892, New York workers took an unpaid day off and marched around Union Square in support of a movement to create a holiday dedicated to workers. The perceived anti-labor actions -- notably sending Federal Troops to Chicago -- of President Cleveland forced the President and Congress to look to appease workers, especially with elections nearing in 1894. Thus, six days after the strike ended in August of 1893, Congress rushed through a bill, which the President signed, that helped officially establish Labor Day. However, in 1894, President Cleveland looked to use that measure to help him win reelection, but he lost the bid to reclaim the White House.

Furthermore, investigations into the strike that followed noted that government regulations towards industries and industry leaders would help prevent labor strife. Thus, while initially appearing that government appeared as anti-labor, there is evidence that the government ultimately lay blame on Pullman and his behavior, which ultimately pushed workers to the brink of boycott. Lastly, the investigation also noted that increased government regulation accompanied by better union representation would likely result in more harmony, thus less changes for strikes similar to the Pullman strike. On the other hand, even as the nation was transitioning from the Gilded Age to the age of the Progressives, industry still won the day. Pullman and many of his industrial giant friends continued for some time making large profits and heavily influencing politics.4 And, some might argue, it is fight that continues today between business, labor, and the needs of a country.