Located in History Park, the historic Zanker House was moved from Alviso in 1986 and restored to serve as the African American Heritage House (AAHH) [1; 3; 5]. Once home to a German immigrant farming family, the house now hosts art exhibits, community meetings, musical and theatrical performances, cultural events, and festivals [1; 3; 4]. 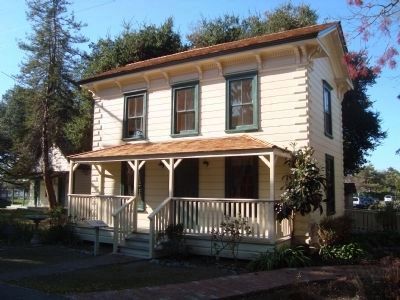 Another view of the house (image from History San Jose) 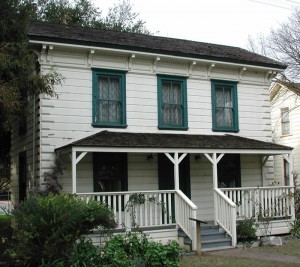 More About the Zanker House / AAHH

F. William Zanker (1831-1909) came to the United States from Germany at the age of nineteen, with little education, and worked in New York, Louisiana, and Missouri before arriving in California in 1855 to work in the El Dorado County mines. He was unhappy with the work and claimed land in Santa Clara County to farm, only to find himself in a two-year litigation over ownership. In the end, he rented the land in Alviso from the legal owner until he could purchase it (1863) [4]. He married another German immigrant, Catherine Watters, in 1861 and built their home, The Zanker House, in 1868. The Italianate-style farmhouse, constructed of California Redwood, stood on the family's 120-acre ranch, on which the Zankers grew pears, strawberries, and asparagus, as well as hay and grain, and raised livestock [3; 4; 5]. William and Catherine had eight children together, requiring a two-room rear addition sometime before 1918 (which was removed during restoration), though there was no flue for heating or cooking in the house [3]. According to a brief biographical sketch of William Zanker, he was a member of the Ancient Order of United Workmen and officially a Republican, though "being liberal in his views, supports the man rather than the party," [4].

The house was moved from Zanker Road in Alviso to History Park in San Jose in September of 1986, along with a two-holer redwood outhouse the Zankers had added in 1906 [3; 5]. Restoration of the house began two years later [5]. In November of 2008, the Zanker House officially became The African American Heritage House (AAHH), dedicated to the education of youth on Silicon Valley's African American history [1]. Lula Briggs Galloway, a San Jose native who founded Michigan's Juneteenth Creative Cultural Center and Museum in honor of the emancipation of African American slaves, also founded the AAHH project. Though Ms. Briggs Galloway died shortly before the house's official dedication, her niece, Sandra Dailey, helped see her aunt's legacy through [1; 2]. The first public event held at the AAHH was a Kwanzaa celebration with 400 attendees in December of 2009 [2]. The house now hosts art exhibits, community meetings, musical and theatrical performances, cultural events, and festivals [1; 3].