An exterior view of the Burton House (36 Forest Street House) 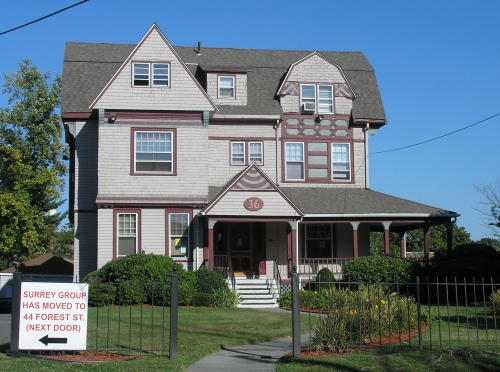 Another exterior view of the Burton House

An earlier house on this same site burnt down in 1870. The Reverend Nathaniel J. Burton, pastor of the Fourth Congregational Church, and his wife, Rachel, rented this earlier house for many years. Some claim that the Burton House is named after the Rev. Burton, but this is not true. He died in 1887, which was probably before the house was constructed. Rev. Burton’s son, Richard Burton, a literary critic for the newspaper The Hartford Courant, lived in the house at one point, and it was after him that the house was named.

However, Nook Farm was not a financial success. To satisfy the mortgage holder, Connecticut Mutual, instead of a payment of money, Hooker and Gillette deeded to the insurance company the small piece of land on which 36 Forest Street now exists. The insurance company in turn re-sold the land to A. Lyman Williston, who constructed the current house on the property. By 1909, the house and property were owned by an insurance executive named Charles Starkweather – no relation, apparently, to the infamous “thrill killer” of the 1950s.

According to the NRHP nomination form: “Its gambrel roof, overhanging stories and broad veranda are all distinctive characteristics of the Shingle Style.” Each story forms an overhang to the one below, and each overhang is set off with a row of small dentils, so that the wood shingle sheathing never becomes one solid sheet. On the end walls, the overhanging gambrel roof is ornamented with large, scroll brackets with beaded molding. The classical "Queen Anne" style is most apparent in a rectangular oriel projecting at the second story of the north wall.

The house is now a private multifamily dwelling, easily viewed from the street.

Private residence: not open to the public