The González-Alvarez House is the oldest surviving Spanish colonial structure in St. Augustine. Evidence shows that the site has been occupied since the 1600s, and the present house dates back to the early 1700s. Visitors began touring this house in 1893 and the U.S. Department of Interior designated the house a National Historic Landmark in 1970.

The Gonzalez-Alvarez House is the only structure from the Spanish Colonial period and is considered the oldest house in the city. 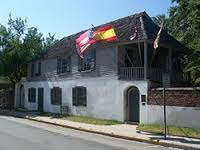 This historical marker describes the history of the house 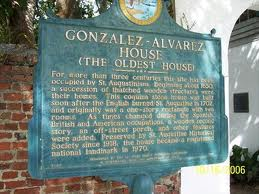 The interior features furniture from the late 19th century. 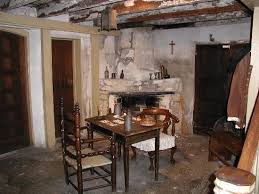 What makes the Oldest House in St. Augustine of Florida so intriguing to tourist and historians is it is placed in the oldest known Colney in USA. Also, the area the house was built survived 400 years through wars, raids, sieges and hurricanes. To understand the location of the home’s significance we need to cover these historical periods: First Spanish Period, Second Spanish Period, British Period, U. S. Territorial Period, and Statehood Period. St. Augustine had an early history plagued by violence and destruction at the hands of rival European nations, the settlement persevered and survived to be the oldest continuously occupied European settlement in the continental United States. Spanish settlers not only had to fight rival European nations, they had to adapt to Florida’s intense weather. Adjusting their architectural techniques to the climate needs of Florida, the Spanish developed a plan for the typical St. Augustine colonial dwelling from 1703 until 1763 (“González-Alvarez House St. Augustine, Florida”).

A Spaniard named Pedro Menéndez de Avilés founded this area. This outpost was raided, burned, and marked by much conflict and violence throughout the 1600s. By the early 1700s, new construction began in this area. It became a little one-story, flat-roofed house. Tomás González y Hernández lived in this house with his wife and their baby. The baby died in the home in 1727 but the González family lived there for forty years.

The family built some of the early coquina stone homes. The City was attacked by unfriendly Native Americans, pirates, and eventually taken over by the British. You will find the location of the home on St. Francis Street, next door to the Tovar House in St. Johns county Florida (Florida Historical Markers Programs). The site the house is built on has been occupied since the 1600s; however, a permanent structure was started in 1723. The 1723 date come from the marriage of Tomas & Maria. Her family had been in St. Augustine since about 1610 but he had only recently arrived from the Canary Islands. The house got its name from “two Spanish owners of the building,” called Tomas Gonzalez y Hernandez and Geronimo Alvarez (Barnes 239) “Gonzalez constructed the original coquina masonry building.” He lived in the house from 1723 to 1763; however, Alverez and his descendants lived in the building from 1790 to 1882 (Barnes, 239). It is significant because it resides in the oldest city in USA, which is 400+ years old. Also, the poor and common folk lived in wooden homes normally, while the wealthy lived in stone dwellings. Because the structure is made from stone, it is highly likely it will last for centuries. The weakest point of the home is the fact that the second story is made of wood, which will rot over time and need to be replaced. In 1763, when Florida was ceded by Spain to Great Britain, the family had to leave, along with the town’s 3,000 other Spanish residents.

The house evolved during the British occupation. Under British rule the house was expanded twice. First and Second expansion of the original 1723 house, was done by Sergeant Major Joseph Peavett. The Spanish lost Florida in 1763 and all vacant wood and tabby houses were used to shelter the soldiers because the barracks were being built. During the British Occupation, “soldiers pulled down about half the town to make firewood, which was scarce” (Barnes 252). This left room for the expansion of remaining coquina masonry Spanish Colonial houses. “Renovations of the Masonry building may have included adding a masonry or wooden second floor” (Barnes 252). The reason British Occupation was short was due to the American Revolution. When the Spanish were given back Florida, the surveyor named “Mariano de la Rocque” found 266 buildings, 114 of which were stone, including the Gonzalez Alverez house.

Sergeant-Major Joseph Peavett, a well-to-do English soldier, purchased the house in the midst of the British period. He began alterations and brought the little house to the size that it is today. Peavett died two years later in 1786. Shortly after his death, his widow, Mary, married a man named John Hudson. To pay off Hudson’s debt, the house was auctioned off in 1790 to a Spaniard named Gerónimo Alvarez. He and his descendants after him lived in this home for almost a hundred years.

During the brief Spanish reoccupation, it gave Florida to the USA under the Adams-Onis Treaty. In 1821 Florida was handed over to USA; also, the City grew by 300 buildings. “By 1962 Albert Manucy Published his study on Spanish colonial buildings and Structures in St. Augustine’ (Barne, 255) Out of the 300 buildings recorded in 1819 “only 31 colonial buildings had survived after 141 years.” What made the buildings last so long was “the use of the most durable local material for their construction,” called coquina (Barnes 255).

The house was passed on in 1882 and was home to various occupants in the next four decades. The House did not receive national attention until the owner “Promoted the building as the Oldest House.” This resulted in many visitors asking to tour the home. After Dr. Charles P. Carver, it was owned by Judge and Mrs. J.W. Henderson, who sold it Felix Fire and George Reddington who in turn sold it to the historical society, at which point it became a tourist attraction.

In 1918 the St. Augustine Historical Society acquired the old house. The Society presents the house as a structure that tells us much about life in colonial St. Augustine. In 1970 the U.S. Department of Interior designated the house as a National Historic Landmark. Today, the González-Alvarez House is part of the St. Augustine Historical Society’s Oldest House Museum Complex. It also includes two museums, a changing exhibition gallery, an ornamental garden, and a museum store.