Julia C. Collins was an African American essayist, teacher, and novelist who lived along the Susquehanna River in Williamsport, Pennsylvania. Her 1865 novel, The Curse of Caste, or, The Slave Bride, is considered to be among the first published by an African American woman. Collins's life and writings provide a glimpse into the rarely documented experiences of nineteenth-century African American women, their families, and their communities.

The state historical marker for Julia C. Collins is along the Susquehanna River in Williamsport, Pennsylvania, near where Collins lived and wrote. 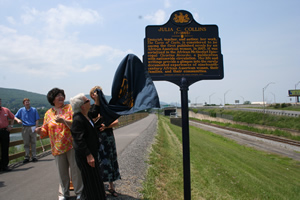 Very little is known about Julia C. Collins, except that she identified herself as African American and that she was married to the African American Stephen Collins, who was active in politics and church affairs in Williamsport. Where she was born, whether as slave or free, who her parents were, and her level of education all remain mysteries. We do know that she wrote well and that in the late 1850s she was appointed by the Williamsport School Board to teach, although no school building in the city was open to Black children. (Julia would have had to teach in a home or in the building that was used as a church.)

Julia began writing a novel in the waning months of the Civil War, and her work was serialized by The Christian Recorder, the national newspaper of the African Methodist Episcopal Church. The story is set in antebellum Louisiana and Connecticut and focuses on the lives of a beautiful mixed-race mother and daughter whose opportunities for fulfillment through love and marriage are threatened by slavery and caste prejudice. The text shares much with popular nineteenth-century women's fiction, while its dominant themes of interracial romance, hidden African ancestry, and ambiguous racial identity have parallels in the writings of both Black and white authors from the period. The novel, and its serialized version, were near conclusion when Julia died of tuberculosis in November 1865.

The dramatic title that Julia gave her novel, The Curse of Caste, is in keeping with the drama of the story of racial identity that she tells. Lina, a beautiful dark-haired woman, and Richard Tracy, the son of a New Orleans slave owner, fall in love. Richard discovers that Lina is actually a slave. Richard and Lina marry despite this, and Richard's father disinherits his son. The newlyweds flee to Connecticut, where Lina dies during childbirth while Richard is back in New Orleans to make an attempt to reconcile with his father. Instead of discussing things with Richard, his father shoots him, and as the badly wounded Richard is recovering, he is deceived into thinking that his infant daughter died along with his wife. That daughter, Claire, grows into a beautiful woman who never knows her own racial identity or that of her parents. The story shifts back to New Orleans, where Claire has taken a job as a governess in what turns out to be the Tracy household. A chance discovery of her parentage may change lives, reveal her true identity, and reconcile the family.

The novel was eventually published by Oxford University Press in 2006. The editors who handled the manuscript composed a hopeful and a tragic ending, reflecting two alternatives Julia almost certainly would have considered for the closing of her unprecedented novel. In their introduction, the editors offer the most complete and current research on the life and community of an author who left few traces in the historical record, and provide extensive discussion of her novel's literary and historical significance.

The Pennsylvania State Historical and Museum Commission dedicated a marker in Julia's honor in 2011. It is the first marker in Lycoming County to honor a woman, an African American, or an author.