Fairbanks, Morse & Company manufactured scales throughout much of the 19th century, but after the Civil war, the company built engines and did so through the mid 20th century, which is what gave the company prominence. They produced pumps, engines, windmills, coffee grinders, farm tractors, feed mills, locomotives, industrial supplies, radios, washing machines, and mowers. The building is typical of the second wave Chicago School mid-rise office building popular between 1900-1910. Hundreds were designed by Holabird and Roche and several lesser-known architects. 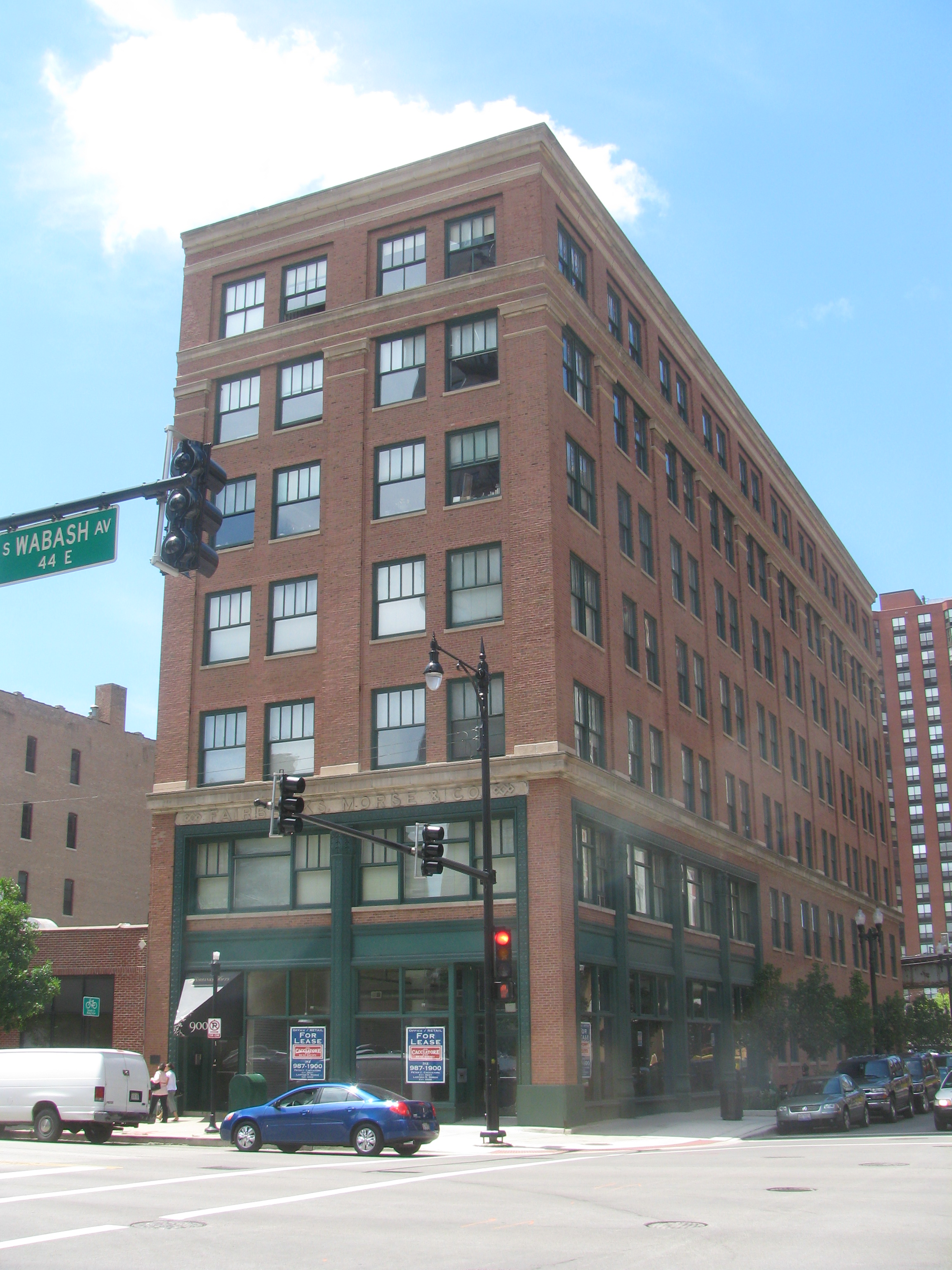 Much like the childhood tale of Thomas the Train, which plays on the notion of the progression of railroads, form wood-burning, to the noble steam engines, to the dirty diesels - the Fairbanks-Morse & Company building serves as a testament to the American industrial progression.  Its founder, Thaddeus Fairbanks (1796-1886)  assisted his father with a sawmill, a grist mill, and building carriages shy of his 20th birthday in  St. Johnsbury, Vermont. He, and the company, later built engines (including gasoline-based), windmills, and household appliances -- all signs of the changing American and industrial-world cultures. Meanwhile, the building stands as part of the skyscraper revolution and as a sign of Chicago's development within the ever-increasing urbanization of American in post-Industrial-Revolution era.

Although the Fairbanks, Morse & Company building dates back to 1907, the company’s origin arose in 1823 when Thaddeus Fairbanks leased his cousin's iron works operation in St. Johnsbury, Vermont, which allowed him to manufacture two of his patented inventions, a cast iron plow and a heating stove. Thaddeus' brother, Erastus Fairbanks soon joined him and they created the company known as E & T Fairbanks.1

For the next decade, the brothers built machinery, notably the platform scale, which they patented in 1831. Though successful inventors, they needed the help of their other brother, Joseph Fairbanks, who was skilled at marketing. Thus, in 1833 the business was incorporated as E & T Fairbanks & Company. The brothers enjoyed rapid success, opening offices in New York and Boston in the 1830s. By the late 1840s, they opened offices in China and Cuba and by 1860, South America and throughout the Caribbean.2

In the midst of that expansion, during the 1850s, Charles Hosmer Morse joined the company in Boston, working for his uncle. After a three-year apprenticeship, he moved to the New York office, and then after the Civil War he  opened his own office to market Fairbanks scales at Cincinnati, Ohio, under the name of Fairbanks, Morse & Company, where he also ran a separate manufacturing company that sold items such as coffee mills, presses, and typewriters, That operation quickly expanded to Cleveland, Pittsburgh and Indianapolis. By 1870, he moved his operations to Chicago and became a partner in the Chicago firm of Fairbanks, Greenleaf & Company.Greenleaf died the following year, and Morse carried on the business independently. However, in 1871, following the Great Chicago Fire, when Morse re-opened the fire-ravaged office, he did so under the name of Fairbanks, Morse & Company.3

By 1875,  Morse managed Fairbanks, Morse & Co. offices in Chicago, Cincinnati, Cleveland, Pittsburgh and Louisville, and, in 1880,  the company also absorbed the Eclipse Wind Engine Company based in Beloit, Wisconsin. The company did not stop there - they continued to buy other corporations and expand the goods they sold, including pumps, tanks, clutches, and eventually steam engines and railway supplies. By the turn of the 20th century, the company offered an expansive list of goods; its  1901 Mining & Supply Catalog was a 700 page hardbound book.4

For most of that time, Chicago served as its headquarters, indicative of Chicago's place as the Midwest's largest city, railroad hub, and as a large financial center.6 The National Register of Historic Places describes the building, which was both a showroom, office building, and warehouse:

The first floor, on the east side of the building, housed the
company showroom. It has its own entrance on the north side of the
Wabash front. A small drawing of 900 S. Wabash in Bulletin 3040 (ca.
1920) of the Fairbanks Morse Name Plate shows merchandise in the large
display windows that extend across Wabash and four bays on 9th Street.

The upper floors are accessed from a second front entrance on the
south wide of the Wabash Avenue facade. It opens into a hall, separated
by a curved firewall from the showroom. The floor is tiled, surrounded
by moldings. The staircase has an iron balustrade. Walls are painted
brick between the basement and the first floor and sheathed in plaster to
the top of the building.

Because the front of the second floor has large Chicago windows flooding the interior with light and air, it is highly likely that this was the area where Company president Charles Hosmer Morse and other top executives managed the sales and distribution of Fairbanks, Morse & Company products. 7

In many ways, the company’s evolution mirrors that of American industry during the late 19th century, which included company buy-outs, and a transition from old mills to windmills to steam engines to diesel. The location of the offices used by the the companies attached to Fairbanks-Morse - Cincinnati, Indianapolis, Boston, Chicago, New York, and even Beloit signify the old American populace that was primarily centered in the Northeast and Great Lakes regions. That once thriving industrial region lost much of its prominence in the later parts of the 20th century, as people and companies moved to warmer locations, such as California and the American South. As such, the Great Lakes bore the metaphorical name, “the rust belt,” signifying its demise. 8

The building is now privately owned and has been converted to lofts.