Located in the heart of historic Harpers Ferry, this popular museum opened in 1961, shortly after the area was designated as a National Park. The John Brown Wax Museum tells the history of radical abolitionist John Brown, the architect of a raid on the federal arsenal at Harpers Ferry on October 16,1859 through the use of eighty-seven life-size wax figures.

In addition to the many displays at Harper's Ferry NPS, visitors can tour this wax museum. 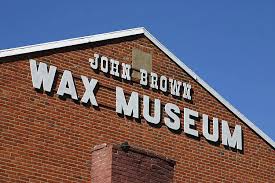 John Brown was born in Connecticut in 1800 and raised in Ohio. For much of his life, he was considered a failure owing to multiple business failures. In the year of 1837, however, John Brown’s life was forever changed when he attended an abolition meeting in Cleveland. In 1855, Brown traveled to Kansas with five of his sons with the expressed purpose of joining the fight against the expansion of slavery. On May 21, 1856, proslavery men raided the town of Lawrence. Brown responded by killing proslavery men and launching guerilla warfare against proslavery partisans.
In 1857, John Brown began raising money and campaigning in support of a plan to foster a massive slave uprising and secure a place where former slaves and others could live in peace. Brown was able to secure the backing of six prominent abolitionists, today known as the Secret Six. He recruited a small army of twenty-two men and rented a farm in Sharpsburg, Maryland in order to prepare for a raid on the arsenal that would provide arms for any slave who would join Brown's force.
On October 16, 1859, John Brown and his men crossed the Potomac River into Virginia ( which is now known as Harper's Ferry) in an attempt to start an armed revolt against slavery. Brown's men easily overpowered the watchmen at the Baltimore and Ohio Railroad Bridge, United States Armory and Arsenal, and the Rifle Factory. However, Brown allowed a train to pass through the area, leading to news of the attack and the quick deployment of nearby Marines.

By the morning of October 17th, Brown and his men were surrounded by Marines under the command of Colonel Robert E. Lee and Lieutenant J. E. B. Stuart. On the morning of October 19, 1859, the marines accepted the surrender of Brown and his men. John Brown was tried for murder and treason in the state of Virginia and was found guilty on November 2, 1859. Brown was sent to the gallows on December 2, 1859.