The Saints' Roost Museum in Clarendon, Texas, features heirlooms from Texas panhandle ranches, farms, and businesses as well as a renovated railroad depot and a collection of materials from the Red River War. Housed in the 1910 Adair Hospital Building, the Saints' Roost Museum preserves the heritage of Donley County and the Texas panhandle. Exhibits focus on local culture, including Native American artifacts and pioneer life with a special emphasis on the legendary Col. Charles Goodnight. The museum is also the home of the restored 1887 Ft. Worth and Denver City Railroad Depot.

The former Adair Hospital, now the home of the Saint's Roost Museum in Clarendon, Texas. 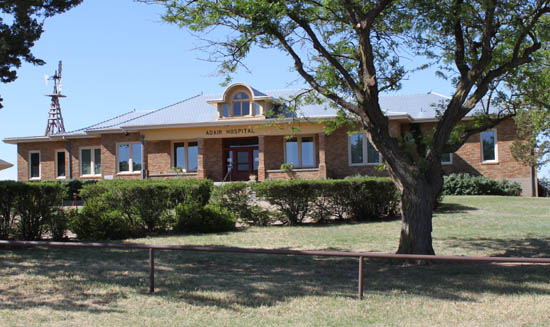 One of the twenty-two-foot Comanche arrows marking the Quanah Parker Trail, winding near the site of the Saint's Roost Museum and around the town of Clarendon, Texas. 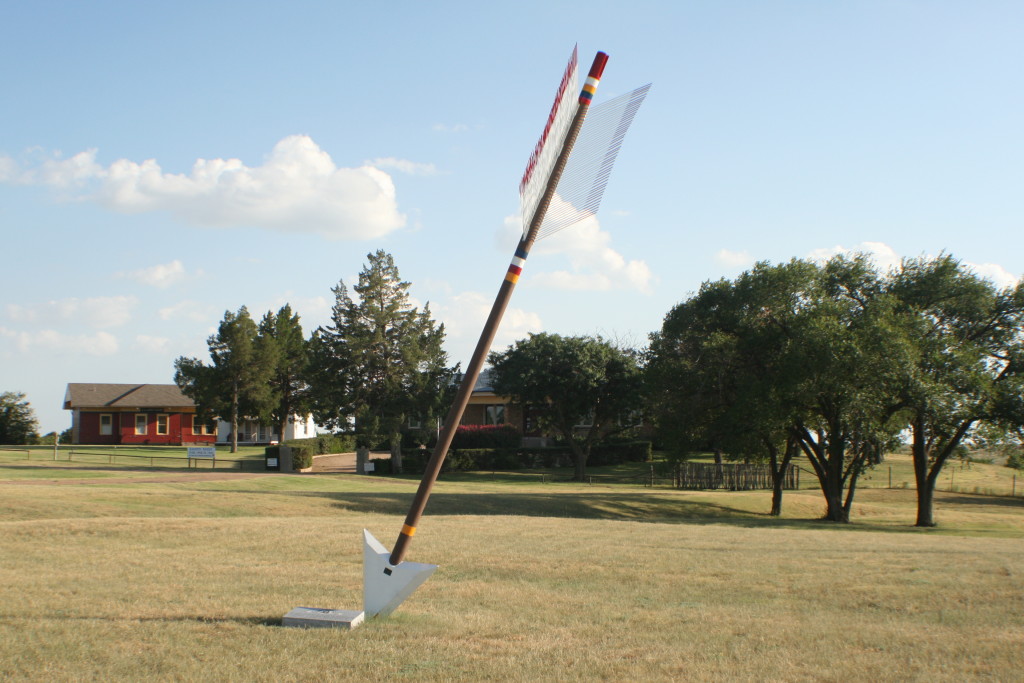 The unusual name of the Saints' Roost Museum is derived from the city of Clarendon, county seat of Donley County, having been established in 1878 as a prohibition community. After purchasing 343 sections of railroad land the Methodist clergyman Louis H. Carhart and his brother-in-law W. A. Allen established Clarendon in 1878 as a Christian colony in the Texas panhandle that discouraged liquor consumption and other "impure activities." Being a "sobriety settlement" in contrast to typical boom towns of that era, and with more than half a dozen Methodist ministers in the town, Clarendon acquired the nickname from local cowboys (especially those from the JA Ranch occupying much of the southwest corner of the county), who called the town "Saints' Roost." The town's reputation as a conservative enclave with educational facilities also earned it the label of "Athens of the Panhandle." And Carhart's motto, "Christianity, Education, Temperance, Civilization--Westward," set high expectations for the townspeople.

The Saints' Roost museum is housed in the Adair Hospital, built in 1910 by Cornelia Adair for use by the cowboys and their families of the JA Ranch. For over thirty years the museum staff have been the caretakers of the building, using it to preserve the heritage and artifacts of Donley County and the Texas panhandle.

Exhibits at the museum include a display dedicated to events taking place in Donley County in 1874 and 1875 (specifically the Red River Wars between the U.S. Calvary and pandhandle Indian tribes); an interactive country store re-creation; a military room (dedicated to remembering and honoring the service of all military branches); and drawings by the famous local artist Harold Bugbee, who began his career in 1920. A Fort Worth and Denver Railway depot was moved to the museum location in the late 1990s and has been fully restored. The Quanah Parker Trail winds around the museum and through the region: a network of twenty-two-foot Comanche arrows mark sites where the Comanches, and their last war chief Quanah Parker, hunted, traded, lived, traveled, and fought before they were forced onto reservations.

The museum also gives special emphasis to the legendary local hero Col. Charles Goodnight's role in "saving" the town. Only a few years after Carhart established (and announced) Clarendon as a sobriety settlement, a few eager outsiders made plans to establish a saloon and a dance hall. These ideas did not sit well with local residents; a few even threatened to scalp the planners if they did not leave. Former Texas Ranger and the owner of JA Ranch, Goodnight used his powerful presence and arguing skill to persuade the business planners to pack up and leave, giving them ten hours to do so. His approach was successful.

Goodnight is commemorated throughout the museum, but in particular through the annual Col. Charles Goodnight Chuckwagon Cookoff, held each September. Entrants are judged on their preparation of chicken fried steak, beans, mashed potatoes, biscuits or rolls, and peach cobbler for forty people, using only the utensils and equipment that would have been available on a chuck wagon.