The Appomattox Court House was built in 1846. While many believe that this was the site where General Robert E. Lee surrendered to General Ulysses S. Grant, the surrender actually took place at the McLean House. This site is historically significant as the location where, on April 8th, 1865, the final battle of the Civil War took place. Confederate forces were cut off from their retreat to North Carolina by Union forces, and General Lee surrendered the next day. 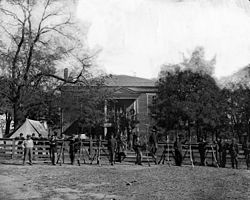 The reconstructed version of the Appomattox Court House 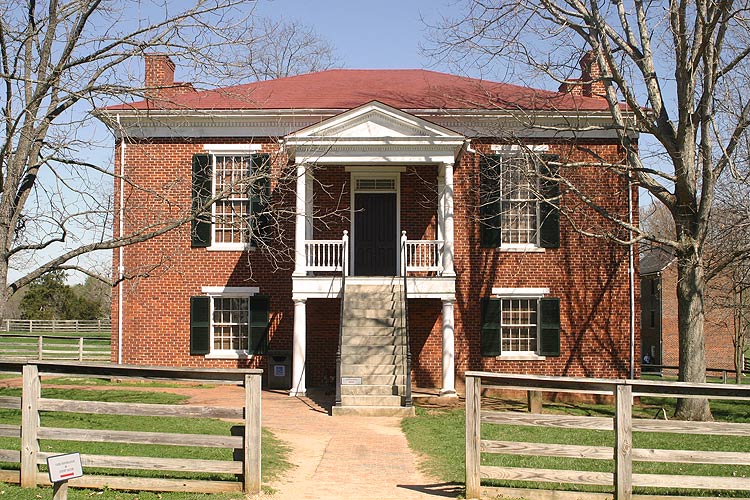 Many have mistaken this building as the site where General Robert E. Lee surrendered to General Ulysses S. Grant, effectively ending the Civil War. The actual location of the surrender was in the parlor of the McLean House, owing to the fact that it occurred on Palm Sunday; the Court house was closed. The Court House is significant in Civil War Military History as the site of one of the last battles fought in the Civil War: the Battle of Appomattox Court House. This was the final battle between General Lee's Confederate Army and General Grant's Union Army.

The Battle of Appomattox Court House took place on April 8, 1865 and was the last battle before the surrender at McLean House. After a long, arduous ten-month siege at St. Petersburg, Lee's army attempted to retreat and meet up with Confederate forces in North Carolina. Union forces pursued, and cut off the Confederate retreat at Appomattox Court House. An estimated 6,000 Confederates were taken as POWs at Salyer's Creek. Lee ordered his men to charge the Union Army. Realizing that there two units of Union infantry reinforcing the cavalry forces, he was forced to surrender. The surrender documents were signed the next day, on April 9th. On April 12, the Army of Northern Virginia was officially disbanded, triggering a series of surrenders in the South and ending the war.

The original "old" Court House burnt down in 1892, but was reconstructed as a part of the Appomattox Court House National Historic Park. It now functions as the visitor center of the Historic Park. The first floor of the new court house is an information center, with the second floor serving as a museum. The museum features artifacts from the Civil War as well as exhibits on The Battle of Appomattox Court House, in addition to videos discussing Lee's Surrender.

The Visitor Center is open daily from 9:00 AM–5:00 PM Closed on the following federal holidays during the winter: Thanksgiving, Christmas Day, and New Years Day.