The Appomattox River Bridge, also known as the Route 24 Bridge, is a historic road bridge located in Appomattox County, Virginia. Constructed in 1930, this bridge includes repeating patterns along the railings; there are alternating panels depicting stylized Confederate and Union flags. These design elements commemorate the end of the American Civil War. The Appomatox River Bridge was added to the National Register of Historic Places in 2005.

A modern photograph of the alternating bridge pattern 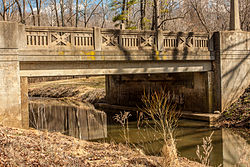 The Route 24 bridge is an example of the single-span, T-beam, non-arched concrete bridges commonly built in Virginia from the early 1900s to the 1960s. All bridge elements follow the guidelines set forth by the Virginia Department of Highways. Unique to this structure, however, are the cast-in-place concrete rails, which depict stylized elements that recall the Confederate battle flag and Union Stars and Stripes. The decorative elements are positioned on alternating panels between the four large obelisks that stand at all four corners of the bridge.

William Roy Glidden, the Virginia's first bridge engineer, designed this notable non-arch bridge. He earned a bachelor’s of science degree in civil engineering from Massachusetts Institute of Technology in 1912. In 1952, Glidden was promoted to Assistant Chief Engineer for the Virginia Department of Highways. Glidden served as President of the American Society of Civil Engineers from 1954-1959.

Between 1970 and 1971, the bridge was widened from 30 feet to 38 feet in order to accommodate increased traffic. The original railings were temporarily removed during construction and replaced after the widening in order to preserve the original design. Additionally, the concrete obelisks and end posts were recast. There is maintenance done as needed to the bridge, but it is otherwise untouched since the 1971 restructuring. The Appomatox River Bridge was added to the Register of Historic Places in 2005.