On November 26, 1835, the last battle in the siege of Bexar (San Antonio)—called the Grass Fight—took place near this marker. The siege was the first major confrontation between Mexican and Texan forces of the Texas Revolution. The Grass Fight was a rather inconsequential battle before the final one that lasted from December 5-9, which resulted in a Texan victory. The Mexican commander, Gen. Marxin Perfecto De Cos, surrendered and led his soldiers out of the province, giving Texans full control over the town.

The marker is located near where the Grass Battle took place. The Texans defeated the Mexican force, but were only awarded hay that was to be fed to the cattle at the Mexican garrison. 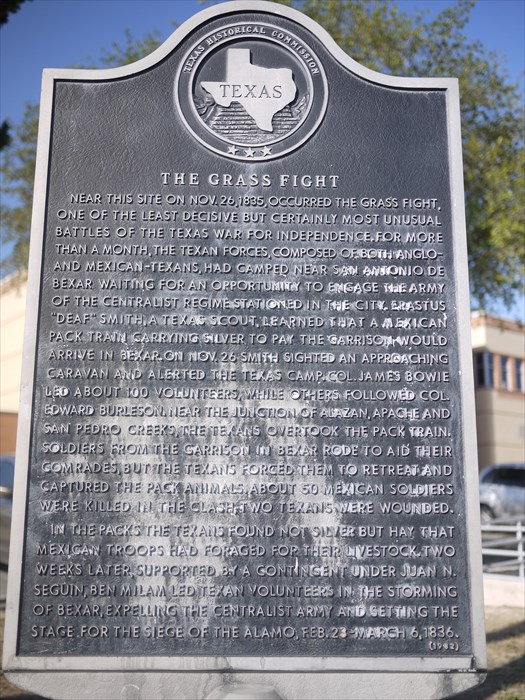 The Grass Fight, which was a Texan victory, was called as such because in the end that is what the Texans got: hay to feed cattle. In November a Cavalry escort commanded by Col. Domingo De Ugartecha left San Antonio to guide reinforcements to the Mexican garrison. During this time the Texan Army had changed commanders by relieving Stephen F. Austin with the new elected commander Col. Edward Burleson. This was done because Austin, along with Branch Archer and Williams H. Wharton, were appointed as commissioners to the United States by the provisional government of the Republic of Texas. Even though the Texans had a new commander, they continued to harass Gen. Martin Perfecto De Cos while he was scouting for the return of Col. Ugartecha.