In December 1890, Ocala hosted a meeting of the National Farmers' Alliance. Attended by eighty-eight delegates and hundreds of visitors, these meetings were held at the Marion Opera House. It was during these sessions that they adopted the "Ocala Demands," a platform that outlined the political and economic reforms considered necessary by the Alliance. This building is now known as the Marion Block Building and is located downtown Ocala. A nearby historical marker offers a concise history of the meeting which led to the formation of the Populist Party- the most historically significant third part of the late 19th century. 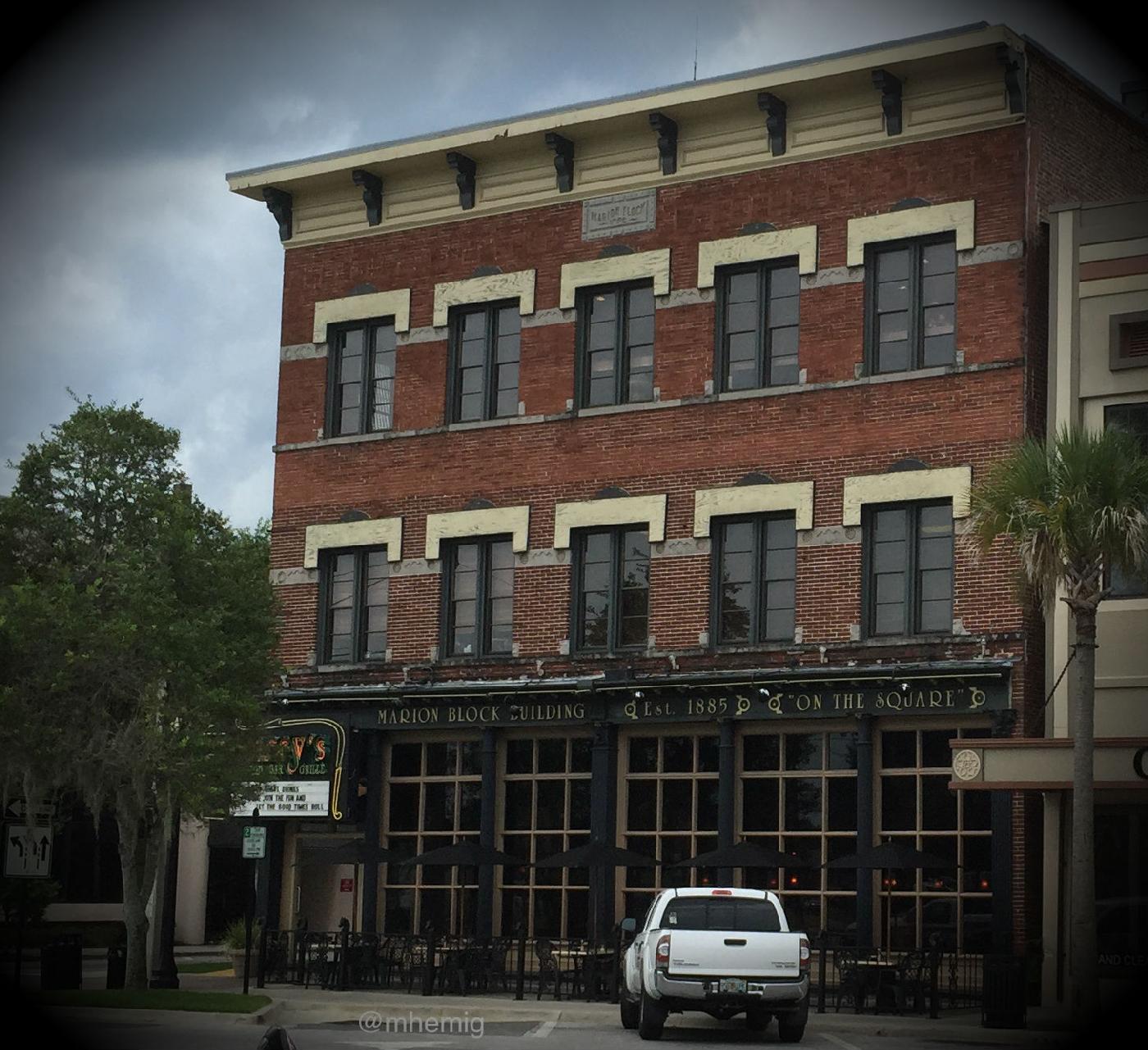 This placard, describing the meeting held in which the "Ocala Demands" were made, is situated outside of the Marion Block House as a historical marker. 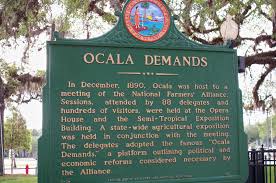 Developed in 1875, the National Farmers' Alliance was an organization that supported an easier way of life for farmers in the country.

One of their biggest concerns was to eliminate the crop-lien system that developed in the United States.  Farmers and sharecroppers who tended to crops, but did not own the land, were on a credit system for food and supplies from local merchants. These merchants placed a lien on the crops so that when harvested and sold, the merchants and land-owners were paid first, and the farmers were given what was left over.  Due to the ever-changing price in cotton, it was not uncommon for farmers to not be paid at all by the end of the season.

The National Farmers' Alliance was also in support of government regulating the transportation industry, as railroad owners placed ridiculously high tax on the movement of goods throughout the country.  While the development of the railroads was a benefit to farmers, the outrageous price of transporting goods often left farmers in debt and unable to provide the goods being demanded.  Along with these desires, the National Farmers' Alliance supported reforms in both currency and income tax policies.

Another demand made by the Alliance was known as the "Sub-Treasury Plan" in which a system of warehouses, funded by the government, would be established in order for participating farmers to have access to the materials they needed at a low cost.  Part of this plan involved farmers' being able to take out low-interest loans and pay back the government with U.S. Treasury notes.  When the Democratic party refused to endorse this demand, the National Farmers' Alliance created their own political party, known as the People's Party.

In December 1890, the National Farmers’ Alliance gathered at the Marion Opera House in Ocala, Florida.  Originally to be held in Jacksonville, the costly meeting was attended by 88 delegates and over 100 guests.  Robert Rogers, president of the Alliance during the time, contacted John Dunn, president of a major bank in Ocala, and asked if he would be willing to host the meeting. Dunn agreed, contributed to the cost of the meeting, and landed Ocala on the map historically.  During these meetings, a group of delegates, including John Rankin Rogers and Marion Butler (elected Populist officials), adopted the “Ocala Demands.”  This set of political and economic reforms outlined the agenda for the People’s Party.

Although short lived, the "Populists" started a movement in rural areas, bringing awareness to the other parties and a voice to many poor farmers who had been struggling after the War.  Eventually, the Democratic party adopted many of the beliefs of the People's Party and the organization ceased to exist as a national political party by the start of the 20th century.

Source 2
MLA: Hild, Matthew. "Farmers' Alliance." New Georgia Encyclopedia. 16 May 2016. Web. 03 October 2016.
APA: Hild, M. (2016, May 16). Farmers’ Alliance. Retrieved October 3, 2016, from http://www.georgiaencyclopedia.org/articles/history-archaeology/farmers-alliance
This article explores how the Farmers’ Alliance was formed, their politics and policies, and its eventual decline. The source is helpful to my research because it provides a background and foundation for the events and setbacks and led the way to the Convention of 1890, where the “Ocala Demands” were proclaimed. Because the farmers’ concerns were both economic and political, there are a lot of aspects to consider when understanding why certain changes were necessary. This source is a reliable one, as it is maintained by the Georgia Humanities Council, the University of Georgia Press, and the Office of the Governor. The information is current and up to date.

Source 3
MLA: Edwards, Rebecca. "The Populist Party." 1896. N.p., 2000. Web. 5 Nov. 2016.
APA: Edwards, R. (2000). The Populist Party. Retrieved November 5, 2016, from http://projects.vassar.edu/1896/populists.html
This collaboration of information includes the development, rise, and fall of the Populist, or People’s Party.  This source is helpful to my research because the National Farmers’ Alliance grew into a major political party.  Their grievances weren’t petty, there was an entire community of politicians who shared similar ideas for reform.  By developing into a political party, the Populists could campaign and inform others of their ideas, and how their reforms could make life easier for everyone.  I would say that this source is a reliable one, as it was created and verified through Vassar College for educational and teaching purposes, however because it was last updated in 2000, it is important to verify that all information is correct and up to date.

Source 4
MLA: Stewart, James I. "The Economics of American Farm Unrest, 1865-1900." EH.net. N.p., 10 Feb. 2008. Web. 5 Nov. 2016.
APA: Stewart, J. I. (2008, February 10). The Economics of American Farm Unrest, 1865-1900. Retrieved November 5, 2016, from https://eh.net/encyclopedia/the-economics-of-american-farm-unrest-1865-1900/
This article describes how the economic changes in the United States after the War played a role in farm unrest.  Although there is debate regarding the cause of unrest, it is generally agreed that “agrarian unrest reflected the growing risks and uncertainties of agriculture after the Civil War.”  After the war, agriculture because more industrialized, which called for more machines and less personal labor.  It also called for farmers to depend on merchants for food, supplies, credit, and anything else needed to keep a crop healthy enough for harvest to sell.  This information is important to my research because it is important to understand WHY the farmers’ felt the need to form an alliance in the first place. This source is a credible one, it is maintained by the Economic History Association, which was established in 1940.  The goal of the EHA is to research and educate on every aspect of Economic History.  Although the article was written in 2008, the information appears to be accurate and un-biased, therefore I would considerate it reliable.