The Grave Creek Mound in Moundsville, WV is the largest Adena conical burial mound in North America. The major West Virginia landmark is currently 62 feet high and 240 feet in diameter and is estimated to contain 57,000 tons of earth. Archaeologists believe that the mound was constructed sometime during the Early Woodland period in successive stages during 250-150 B.C. The mound once had a three-story observatory and Civil War artillery on its summit. Horse races were often run around the base. Today the Grave Creek mound is owned and operated by the West Virginia Department of Arts, Culture and History as part of the Grave Creek Mound Archaeological Complex. The Complex includes the Delf Norona Museum and the state's repository for West Virginia's archaeological collections. 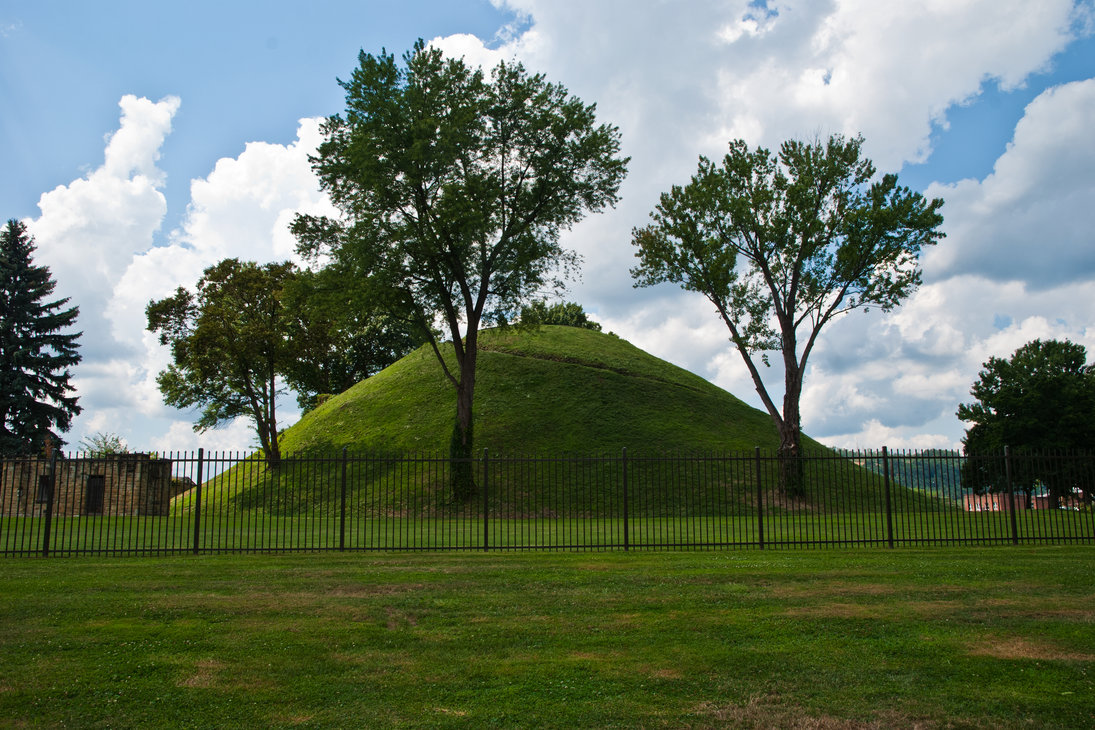 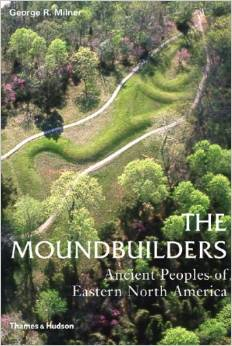 Inside the Delf Norona Museum. 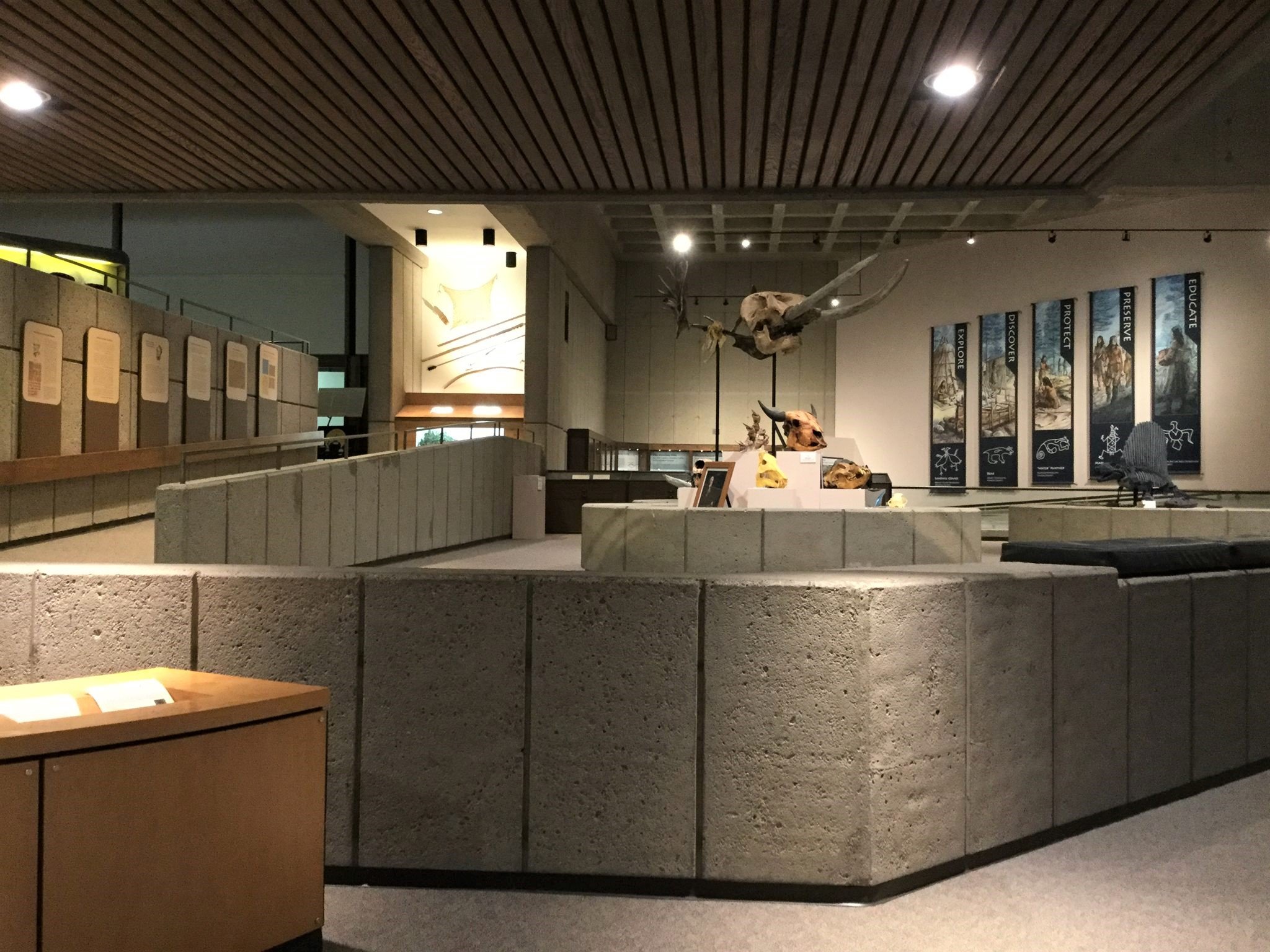 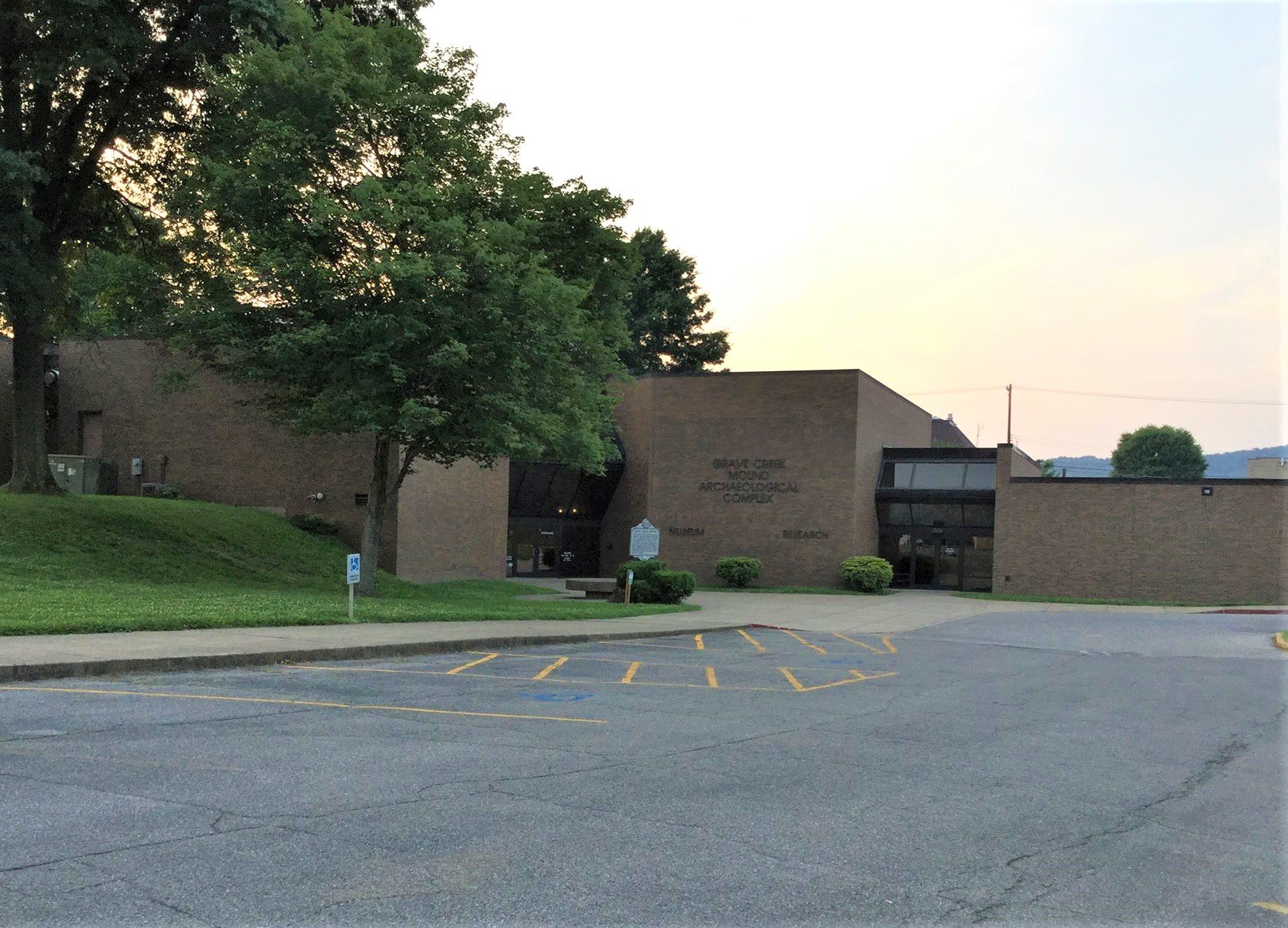 South side of the mound with the remains of the original museum. 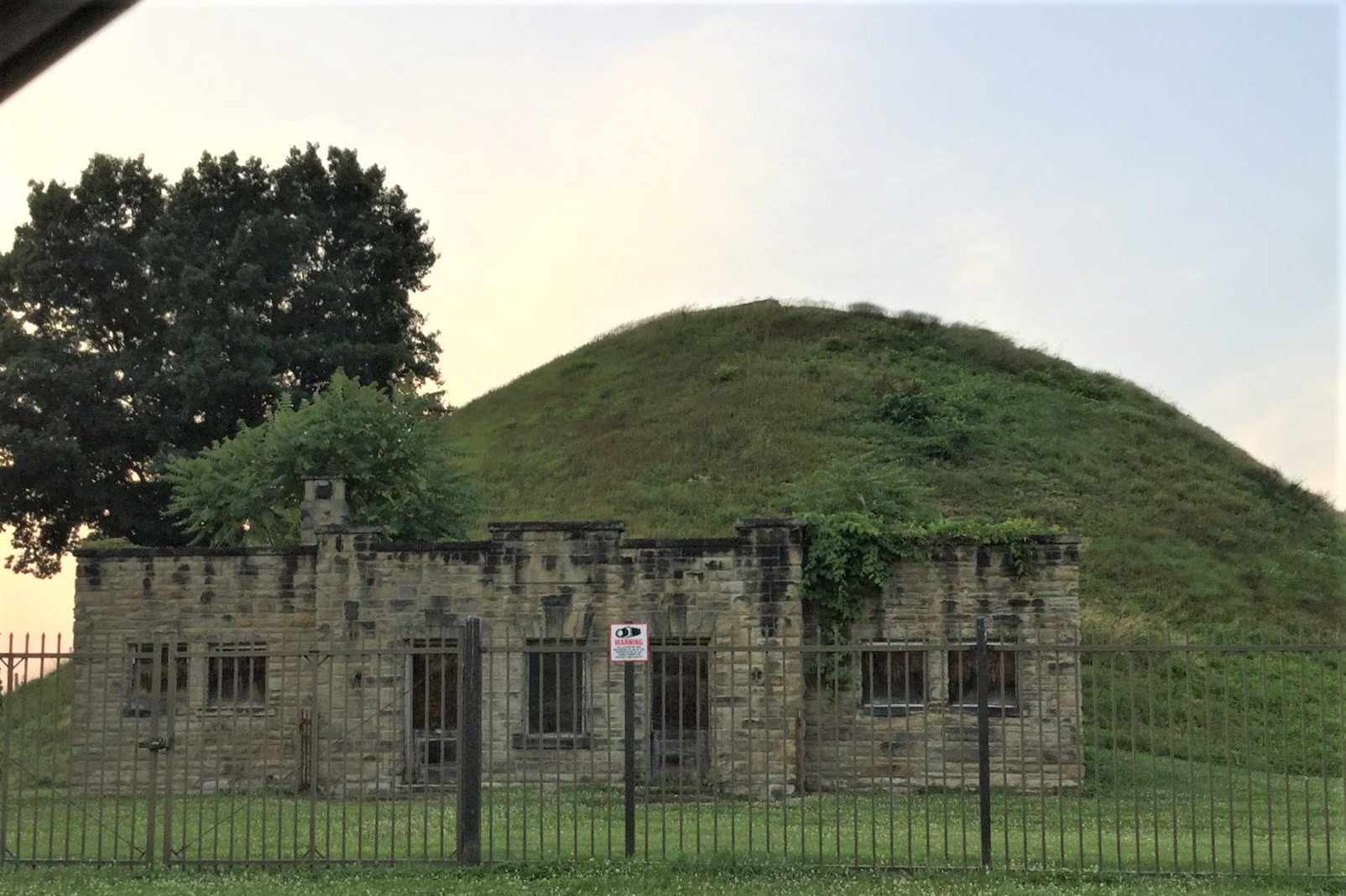 The viewing window of the Research Facility.. 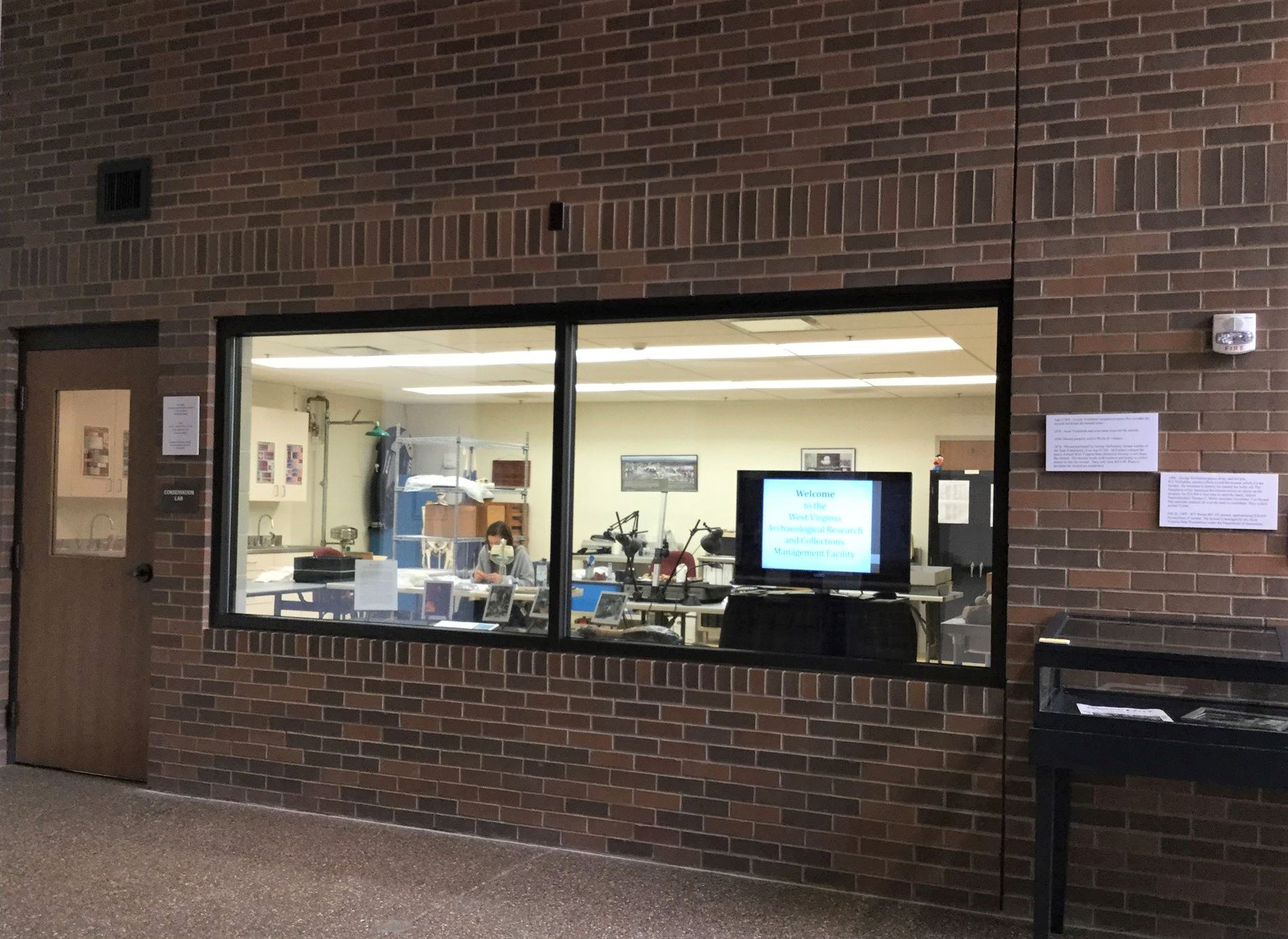 Curation of archaeological artifacts in progress. 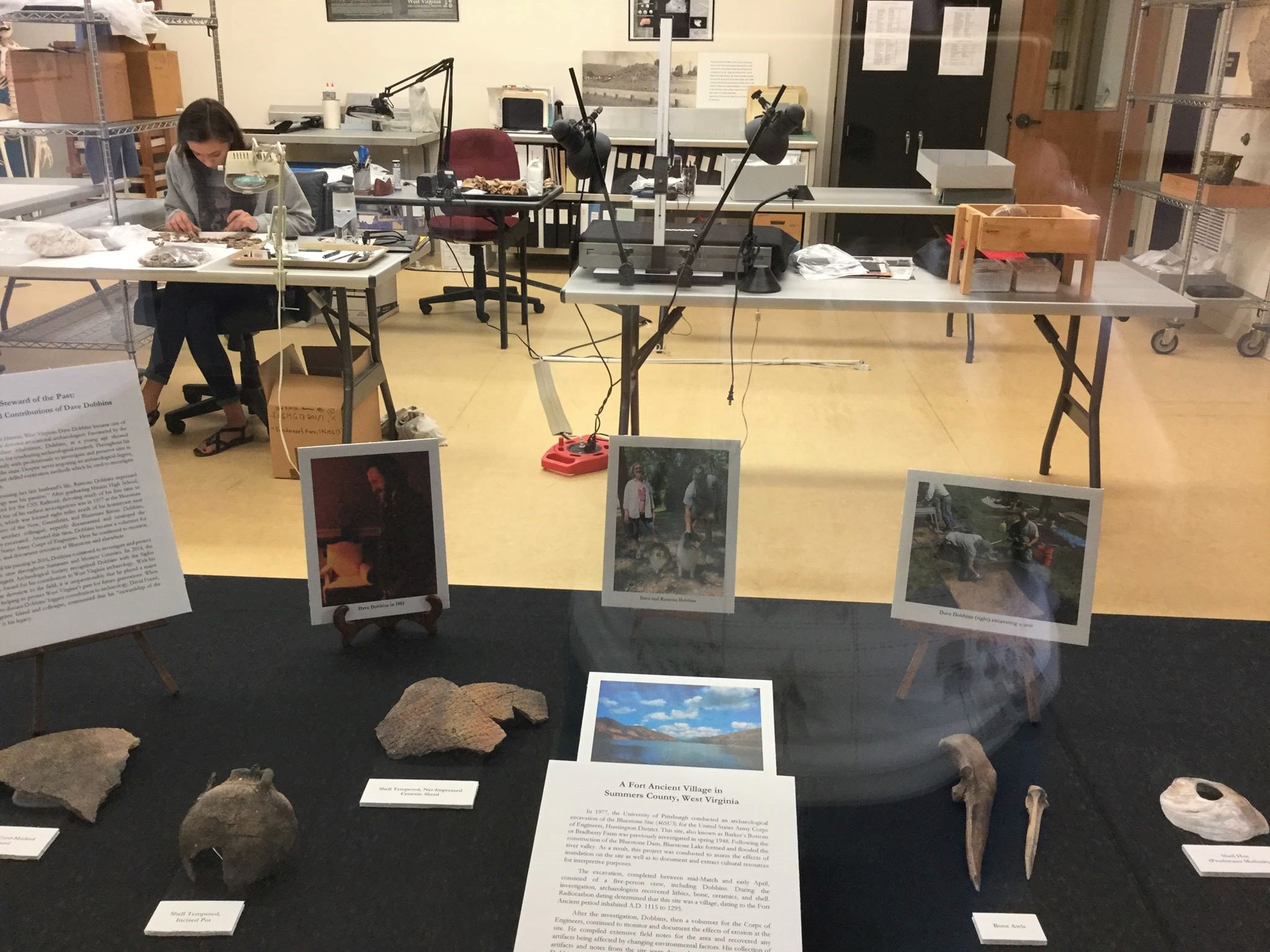 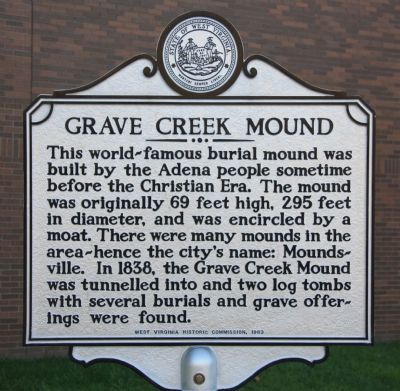 The first European colonist to "discover" Grave Creek Mound was Joseph Tomlinson who noticed it while hunting in 1772. Jesse Tomlinson and Thomas Biggs, who were not archaeologists, tunneled into the mound in 1838 in search of buried treasures. When Tomlinson and Biggs dug two tunnels and a vertical shaft into the mound they uncovered two burial chambers. The men enlarged the lower burial chamber and opened it as a museum charging .25 cents admission. In 1909, West Virginia purchased the mound and wardens of the West Virginia Penitentiary used inmates to maintain the mound until the State Parks took over operation of the site in 1967. The first scientific excavation of the area was conducted by Dr. E. Thomas Hemmings of the West Virginia Geological and Economic Survey in 1975; Hemmings found evidence of a ditch encircling the mound.

The city of Moundsville derives its name from the Adena burial mounds once located on Grave Creek Flats. Grave Creek Mound was the largest and is over 2,000 years old. Approximately 57,000 tons of earth had to be transported by baskets manually to construct it. Core samples taken during Hemmings' 1976 excavation provided evidence the mound was created between 250-150 B.C.

Early estimates often place the height of the mound at about 70 feet before the 1838 tunneling. The mound was originally encircled by a 40-foot wide ditch. It was approximately 5-feet wide and did not hold water. Instead, it set the mound apart from the surrounding landscape. Access across the ditch as possible by an earthen causeway that interrupted the enclosure. The ditch slowly silted in and was finally completely filled in 1838 by dumping soil excavated from the tunnels and shaft into it. .

The 1838 excavation discovered two human skeletons in the lower burial chamber and a third individual in the upper chamber. Artifacts included mica, gorgets, copper bracelets and a large number of shell beads. In addition to the Adena ornaments and remains purportedly found in the inside of the mound, the upper vault contained a small flat sandstone engraved with alphabetical characters. Authenticity of the stone and the meaning of its inscription became a topic of controversy. The stone has never been authenticated and has been disputed by most professional archaeologists and linguists. Around 100 B.C. some Adena populations began to transform and probably became the Hopewell Culture,

Other mounds that existed in the area either no longer exist (flattened in the nineteenth century during urban development, looting, and plowing). Many that survive exist on private property. One smaller Adena mound available for public access is located in Glen Dale at the Cockayne Farmstead.

The Delf Norona Museum was established in December of 1978 opening up the world of the Adena for all to see. The upper level of the museum is dedicated to the findings concerning the life and culture of the Adena people as well as the construction of the Grave Creek Mound. The Adena did not have written records, so it is important to study what was left by them in order to learn more about their cultures and beliefs. The strategies of how the Adena built burial mounds is not well known, but visiting the Grave Creek Mound Archaeological Complex will provide insight to decipher the Adena culture.

The West Virginia Collections Management and Research Facility includes a viewing window where visitors can watch artifact curation in progress and on the first Saturday of October, Archaeology Day is celebrated with a behind the scenes tour of the Research Center where the state archaeological is housed.