The city of Fairbanks exists in large part due the discovery of gold at this location. Felix Pedro (an Italian immigrant who Americanized his name from Felice Pedroni) struck it rich here on July 22, 1902. He filed his claim a couple of days later and officially recorded in October. He named the creek and adjacent hill after himself. Upon hearing of the discovery, people flocked to the site and established the city of Fairbanks, which is 12 miles south. The discovery also resulted in the beginning of major mining enterprises in the Alaskan interior. The site was added to the National Register of Historic Places in 1992. Nothing of the mining operations on the creek remains so the area resembles what it looked like on that day in 1902. 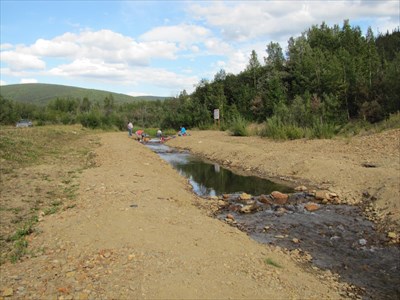 Felix Pedro left for the U.S. in the mid-1880s and worked his way across the continent working in mines, finally arriving in Alaska in the 1890s. He found gold in four other locations in the immediate area of the first claim and struck it rich on a least one of them. He got married in 1906, toured Europe, and returned to Fairbanks. Interestingly, he died eight years to the day of his discovery on July 22, 1910.