The Walk of Fame

The Walk of Fame at Rollins College in Winter Park, Florida is a horseshoe-shaped walkway surrounding the campus "Green." Created by Rollins president Hamilton Holt, this monument was dedicated in October 1929. The Walk of Fame contains over 500 stones taken from the birthplaces of men and women of historical interest around the world. The beginning of the path is marked with a millstone that features a quote from Shakespeare's "As You Like It," which states, “Sermons in stones and good in everything.”

White marble slab marked with the name “Aristotle,” taken from a location near the Lyceum in Athens, Greece. Image by ATrumbly via Flickr Creative Commons, 2.0 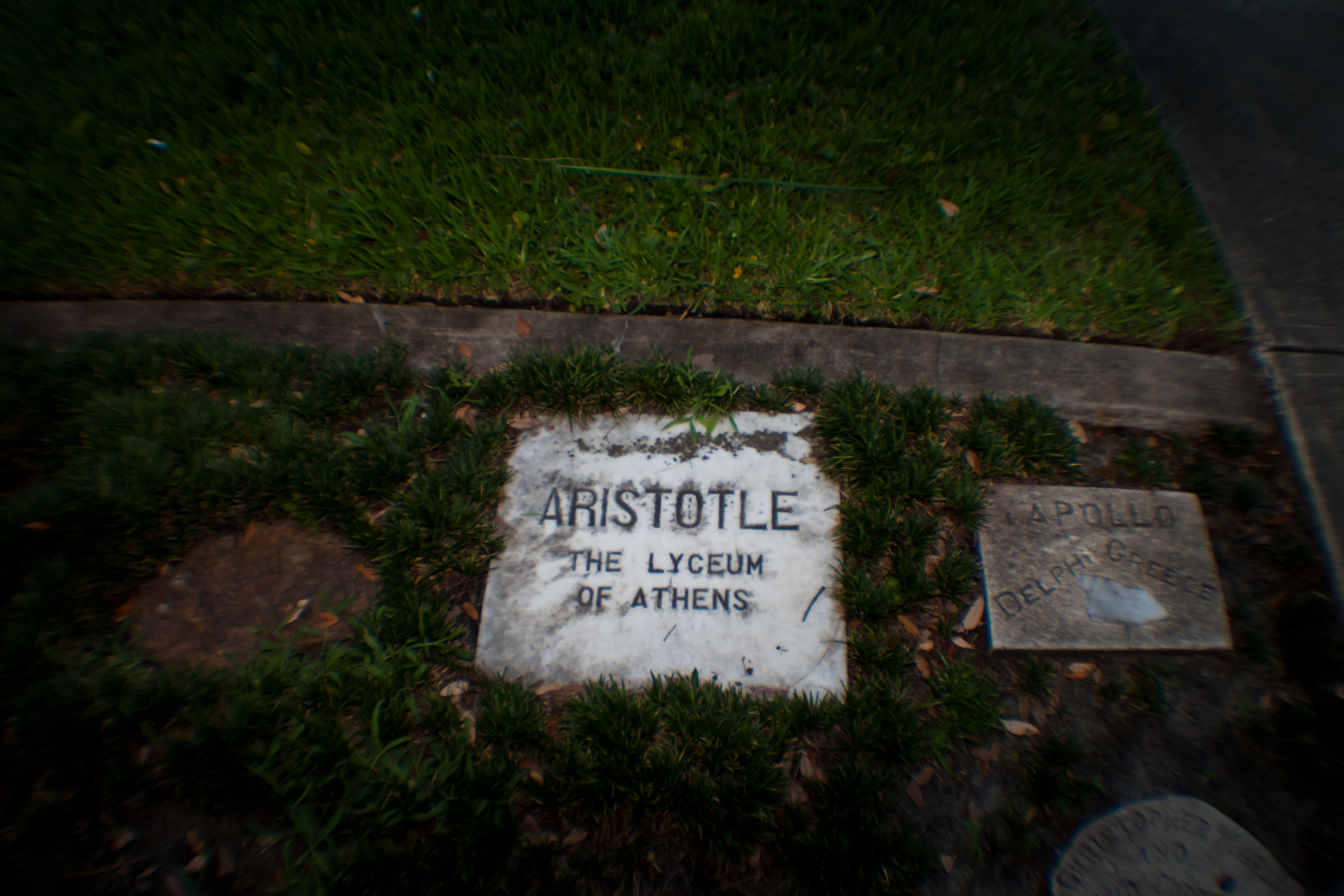 In October 1929, The Walk of Fame at Rollins College was dedicated. It is an oak-shaded walkway along the campus lawn, called "The Green," lined with stepping stones. The monument was created by Rollins College President Hamilton Holt, who was inspired by the "ancestral walks" popular around his family home in Woodstock, Connecticut. These consisted of stepping stones taken from ancestral homes, engraved with the name of the family member who lived there. After designing one for his own residence, he began collecting stones from the birthplaces of individuals of interest to the general public.

Holt and his colleague, Professor A.J. Hanna, collected more than 200 stones for his project, many from detours taken during road trips on his drives to acquire funding for the school. The stones were intended to represent individuals of great fame and importance, although many of the names along the pathway are relatively unknown today. In 1945, Holt received a stone from the bunker fireplace of Adolf Hitler; it is not featured on the walkway.

Some of the more notable stones are from a well near Abraham Lincoln's Kentucky log cabin, and another from the village in Illinois where he courted Ann Rutledge. George Washington is represented by a rectangular geological specimen from Mount Vernon. Woodrow Wilson, Richard Wagner, Aristotle, Oscar Wilde, and others are also represented. The most recent additions honor the actress Annie Russell (for whom the Annie Russell Theater is named), Edyth Bush, and Zora Neale Hurston.

The head of the walk is marked with a 3,325-lb millstone engraved with a quote from Shakespeare's As You Like It. It states “Sermons in stones and good in everything.”1 Holt had the millstone shipped from Connecticut; it was brought to Winter Park on the back of an alumnus’s truck as the graduate was visiting Florida to pick up a load of citrus fruit.

Following Holt's retirement in 1949, the path fell into disrepair. Stones were often stolen or thrown into Lake Virginia as a senior prank during the 1950s and 60s. In the 1989, President Thaddeus Seymour spent $250,000 to preserve the stones and redesign the walkway. The Walk of Fame is located in front of the Mills Memorial Building. It is one of several sites of historical interest on the historic Rollins College campus.