Fort Magruder was built during the Civil War to protect Austin from coastal attacks. The marker is near the former site of the fort, which was along what was known as the San Antonio Road. Major Julius Kellersberg oversaw the building of the fort in the winter of 1863-64. The fort was built by slaves and was large enough to house 200 soldiers. It was abandoned in early 1864 after the Union Army attacked Texas from the Red River in Louisiana. 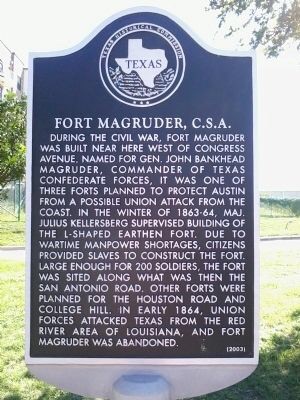 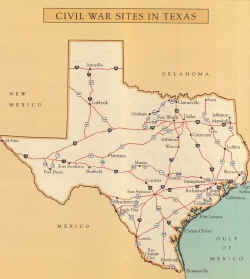 Map of the Confederacy 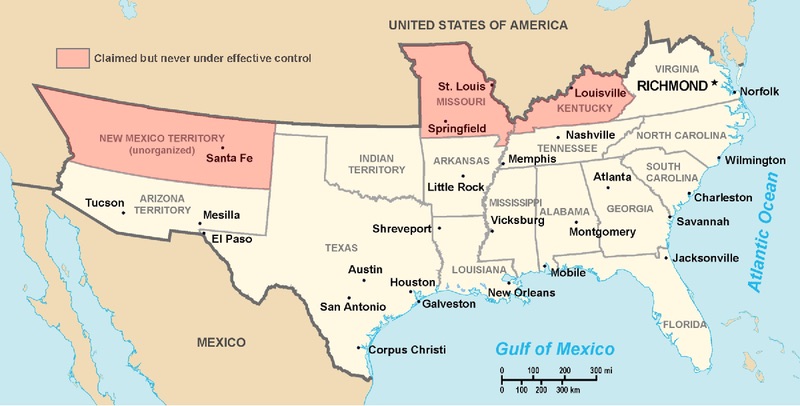 When Texas seceded from the United States during the Civil War, Sam Houston was governor. However, he refused to declare loyalty to the Confederacy and was thus replaced by Lieutenant Governor Edward Clark. Although Houston was not opposed to slavery and was against the election of the Lincoln Administration, he believed secession to be a "rash action." Regarding the outcome of the Civil War, he said, "Let me tell you what is coming. After the sacrifice of countless millions of treasure and hundreds of thousands of lives, you may win Southern independence if God be not against you, but I doubt it. I tell you that, while I believe with you in the doctrine of states rights, the North is determined to preserve this Union. They are not a fiery, impulsive people as you are, for they live in colder climates. But when they begin to move in a given direction, they move with the steady momentum and perseverance of a mighty avalanche; and what I fear is, they will overwhelm the South."
Not many battles of significance were fought in Texas during the course of the war. However, Texas and western Louisiana traded cotton by transporting it over the Texas/Mexico border via the town of Matamoros, Tamaulipas. The cotton was then shipped to Europe in exchange for supplies. The Union orchestrated several attacks to stop this trade, all of which were unsuccessful.