As part of the US military's plan to defend Washington D.C from a possible attack during the Cold War, the federal government funded the creation of a ring of Nike anti-aircraft missile sites around the perimeter of the city. This state historical marker stands at the location of the launch control facility for three of the thirteen missile sites. The launch control facility was located just east of the sign on Fairfax County Parkway. In some ways, the missile defense system dates back to the construction of naval batteries, meant to destroy enemy ships in an era characterized by a different kind of threat. 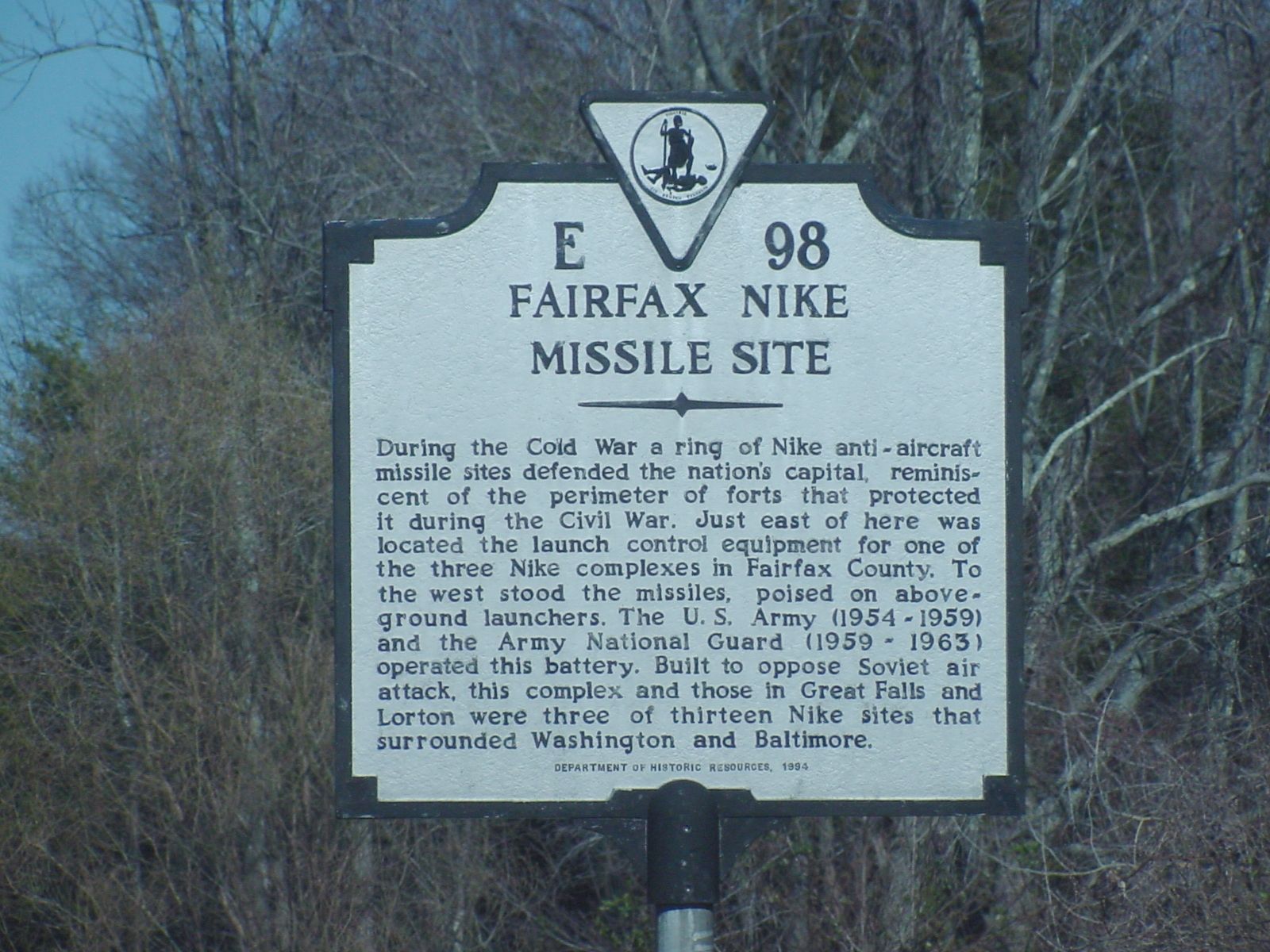 The success of the Manhattan Project, and subsequent decision to use the nuclear weapons on Japan, ushered in the age of nuclear warfare. Until 1949, the United States was the only country that had nuclear capability. In that year, the Soviet Union successfully detonated an atomic weapon, marking a new phase in the global Cold War. American officials thought a missile defense system could limit both conventional and nuclear attacks, and decided to create missile sites near high-risk targets.

The three Fairfax Nike Missile sites were controlled by military officials, operating in a once-secret location just east of this marker. These controls were manned by both the U.S. Army National Guard and the U.S Army. The prevailing theory during the Cold War was deterrence; the idea that countries should and could make the response of any nuclear attack on their nation so devastating that no foreign power would ever attack. Over time, both the US and Soviet Union possessed a nuclear arsenal so vast that it would be impossible for either nation to "win" a nuclear war with the other. Deterrence at this level was known as "Mutually Assured Destruction." Should Soviet bombers or other enemy aircraft approach the nation's capital, military officials hoped that they could simply shoot those aircraft down with Nike anti-aircraft missiles rather than test the limits of nuclear deterrence via mutual destruction.

The missile defense system such as the Fairfax Nike Missile sites were the last line of defense for the nation. The prevailing idea prior to this time assumed the United States was so far away from their rival powers that nobody could strike within the country itself. The new age of technology with missiles and planes changed this entire thinking. Russia could strike the United States, and the United States Air Force could do nothing to prevent this attack. This new threat required new defense systems, and this is exactly what the Fairfax Nike Missile sites were.

Nike sites, arranged in rings around vulnerable areas, typically consist of two sections: the Integrated Fire Control (IFC) area, and the Launcher Area. The former housed radar and computers, intended to track incoming aircraft and guide missiles, whereas the former served as the missile storage location. These sections were separated by about .5 to 3.5 miles.

This site is one of the remains of the 265 Nike missile bases that were deployed throughout the country. The text from the marker is reproduced below:

During the Cold War a ring of Nike anti-aircraft missile sites defended the nation's capital, reminiscent of the perimeter of forts that protected it during the Civil War. Just east of here was located the launch control equipment for one of the three Nike complexes in Fairfax County. To the west stood the missiles, poised on above-ground launchers. The U.S. Army (1954-1959) and the Army National Guard (1959-1963) operated this battery. Built to oppose Soviet air attack, this complex and those in Great Falls and Lorton were three of thirteen Nike sites that surrounded Washington and Baltimore.1