The President Gerald R. Ford Jr. House is a historic home in Alexandria, Virginia. Built on 514 Crown View Drive in 1955, the house was the home of Gerald Ford and his family while he was a member of the United States House of Representatives as Representative of the 5th District of Michigan until he became the President of the United States on August 19, 1974. It is also notable that the home’s garage was converted into a command post when Ford became the Vice President in 1973. On April 17th, 1990, it was designated on the Virginia Landmark Register, and on January 17th, 1991, it was added to the National Register of Historic Places.

A view of the home in 2002 ((By Quarterczar [Public domain], via Wikimedia Commons)) 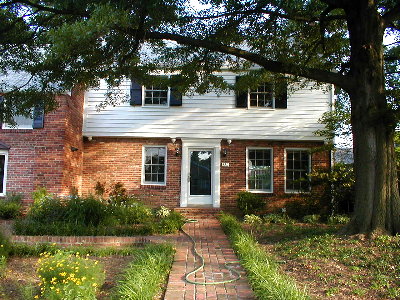 Since 1948, Gerald Ford and his wife had lived in apartments in Washington, DC, after Gerald was elected to a seat in Congress. The Fords had two young children by 1950, and it was evident to the both of them that it would be best for the family if they lived in a house. In 1955, Ford was serving in the United States House of Representatives as Representative of the 5th District of Michigan, and he opted to move himself and his family to a home in Alexandria, Virginia. The Fords contracted out the construction of a home for them, and in 1955, the home was completed. There, the Fords lived comfortably and happily for a number of years.

Once Ford was elected to the seat of Vice President, the family continued to live in the home in Alexandria briefly as they prepared to move to the Admiral’s Mansion at the Naval Observatory in Washington, DC. However, Nixon’s resignation as president put their moving efforts to a halt, and their moving preparations became preparations for moving into the White House. During Ford’s time as president, the family retained ownership of the home in case they decided to move there after Ford’s term as president, but they instead decided to settle in California following the Presidency. On April 17th, 1990, the Alexandria property was designated on the Virginia Landmark Register, and on January 17th, 1991, it was added to the National Register of Historic Places.