Fort Pickens and the Battle of Santa Rosa

The largest of four forts built to defend Pensacola Bay, Fort Pickens was constructed between 1829 and 1834. The fort is located on the Gulf Islands National Seashore- a location that allowed a small garrison to defend the entrance to the harbor. Fort Pickens was named after Major General Andrew Pickens, a militia leader in the American Revolution. 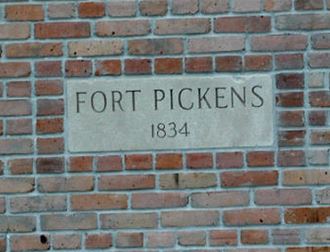 Just a fraction of the 21.5 million bricks used to build the fort. 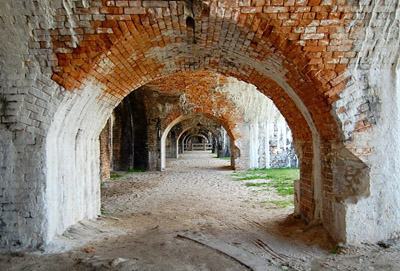 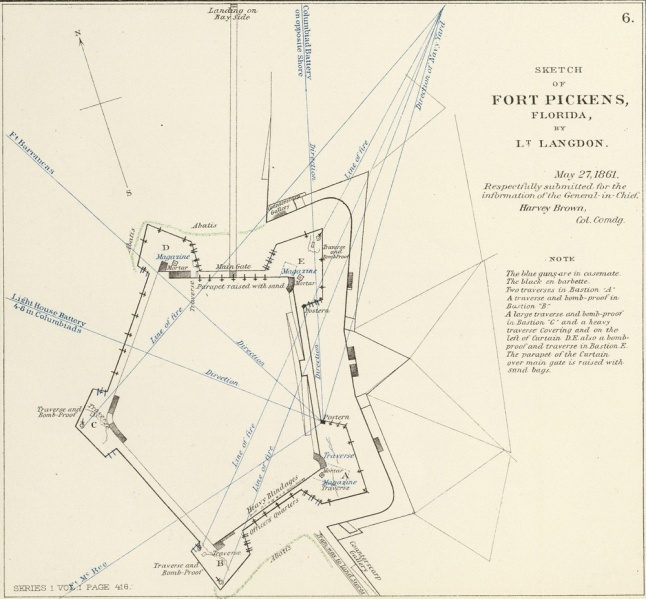 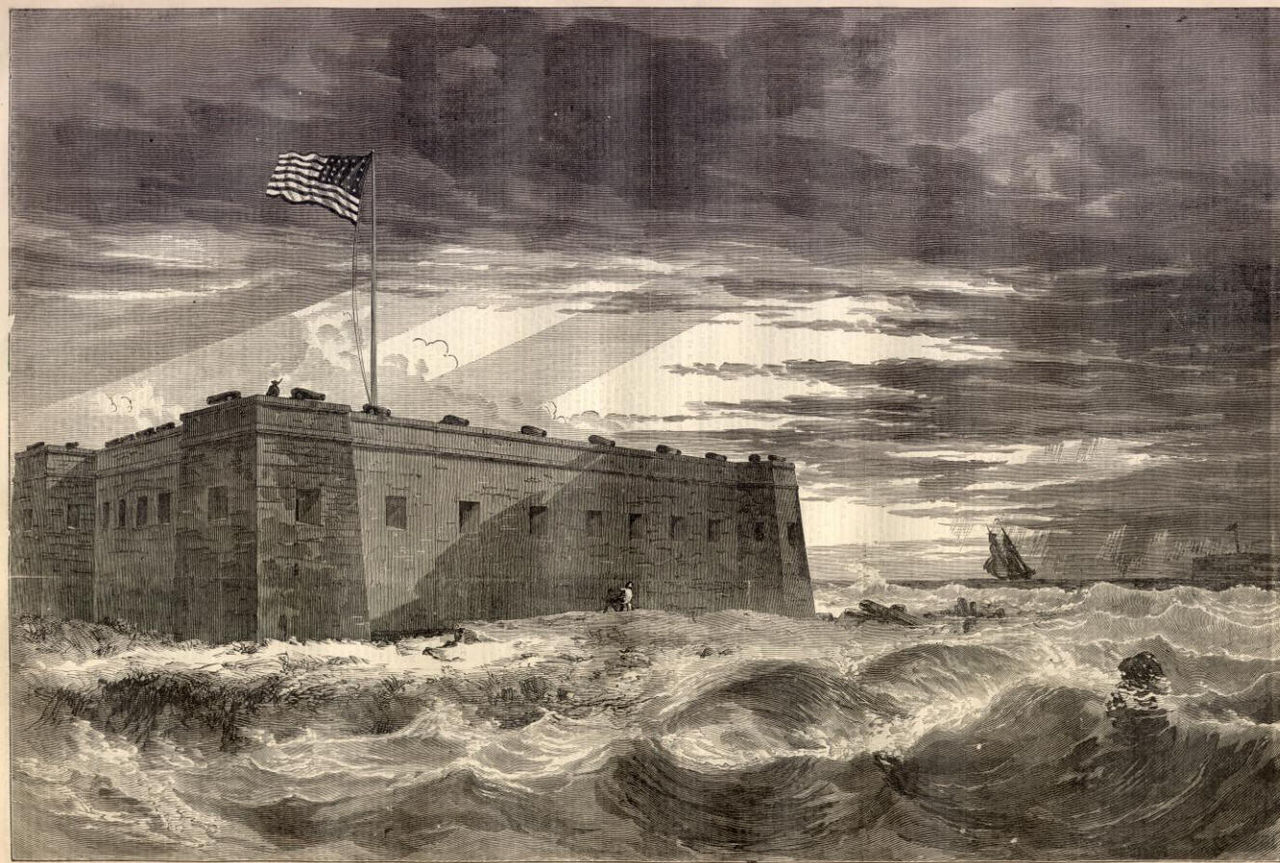 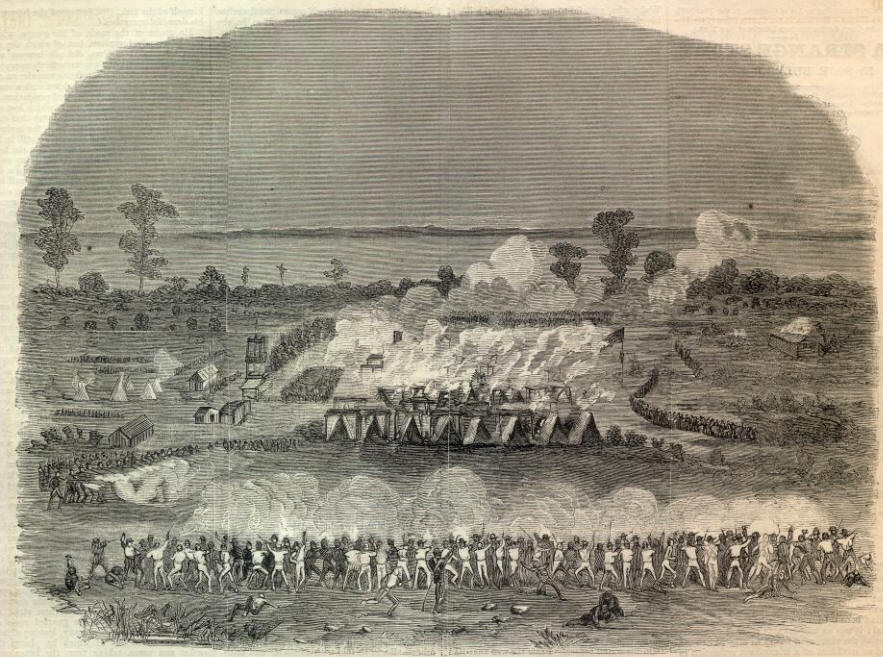 Colonel William (Billy) Wilson, seated center, of the 6th Regiment of New York Volunteers Zouaves and some of men taken sometime after the battle 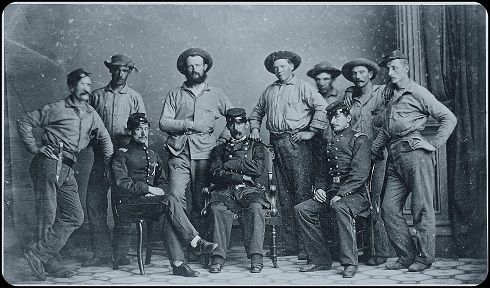 Mortar found in the fort 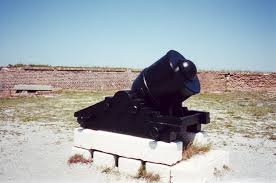 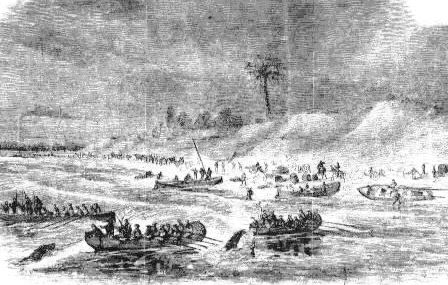 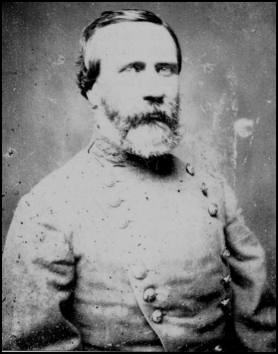 Sketch of the fort a month after the battle 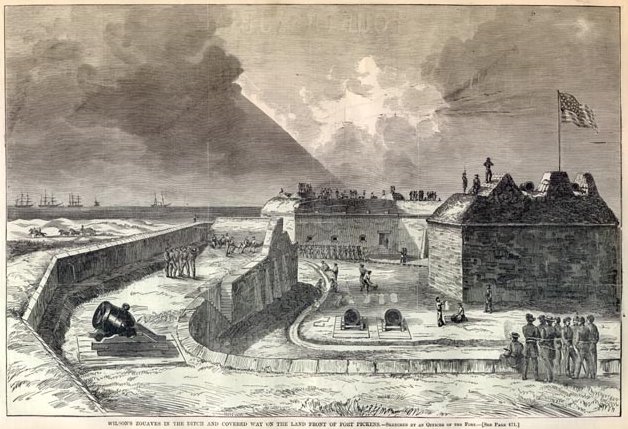 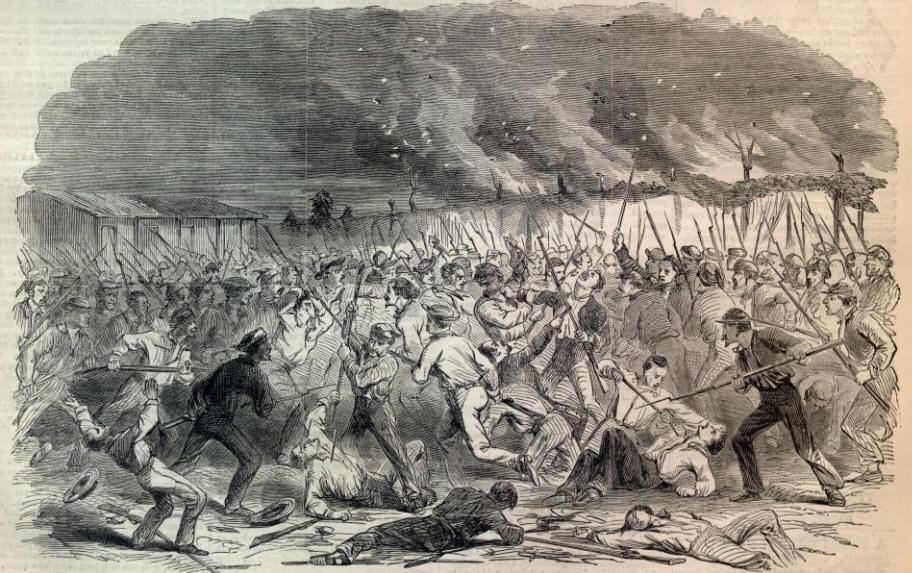 Ariel view of the Gulf Islands. Santa Rosa on the right 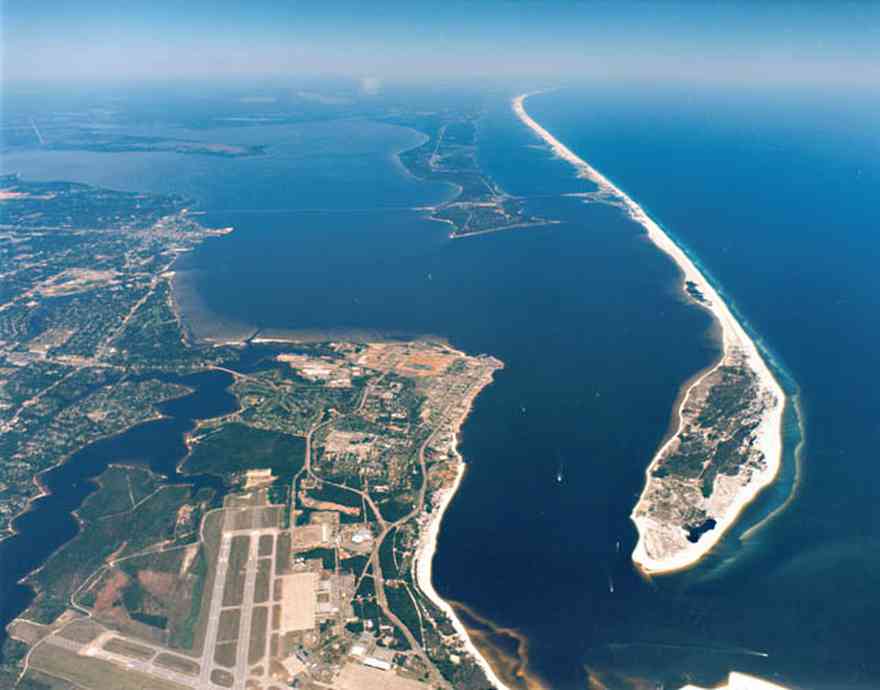 Ariel view of the fort 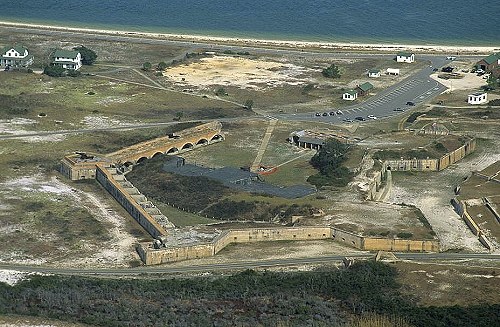 Part of a wall 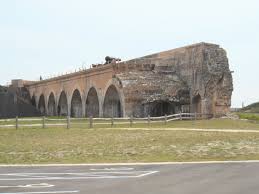 Following the War of 1812, the U.S. decided to secure their ports. Fort Pickens, located on the western end of Santa Rosa Island near Pensacola, Florida, is the largest of four forts built to defend Pensacola Bay and its navy yard. The pentagonal fort was begun in 1829, completed in 1834, and used for military purposes until 1947.General Simon Renard and Colonel Joseph Totten designed the fortress. He recommends fortifying three points of the fortress. The west end of the Santa Rosa island, the eastern end of Pardon Keys and the Bluffs north of the channel. This design saved the government money and allowed quickly to fortify Per Dido Key. The government acquired around 998 acres of land on Santa Rosa island to build Fort Pickens. As the article states “Construction materials such as lime, water, and sand to mix mortar; lumber for grillage and to build wharves, scaffolding, and support buildings; lead sheets to waterproof casemate arches and for gutters and drains; granite for steps and traverse stones; copper sheeting, bars, and fixtures for use in powder magazines; brick for the main work and the counterscarp.” (nps.gov).

Named after American Revolutionary War hero Andrew Pickens, the fort has been involved in every major American conflict from the Civil War through World War II. Its major role was during the Civil War, when it was one of four seacoast forts in the South that remained in Union control. This fort was one of the few held by the Union when the Civil War broke out. On October 9, 1861, Confederate forces attacked Santa Rosa Island and the fort in order to both capture the fort and gain total control of Pensacola Bay. This would put an obstacle in the way for the Union to deal with as it sought to implement its blockade of all Southern ports.

During the early months of the Civil War, the Union held the fort, and therefore controlled traffic moving in and out of the harbor. 1,200 Confederate troops led by Brigadier General Richard Anderson attempted to change this on October 9, 1861. On that day, these troops departed the mainland and crossed over to Santa Rosa Island by steamer boats. General Anderson hoped to take the Union army by surprise. Landing about four miles to the east of the fort, General Anderson and his three columnns made their way to within three miles of the fort. It was here that the soldiers encountered a regiment of New York Volunteers.

Under the command of William Wilson, the men of the New York Volunteers scattered before the Confederate soldiers, who proceeded to set fire to their camp. Knowing that Union forces at Fort Pickens had been alerted, and not wishing to make easy targets in the approaching dawn, General Anderson began moving his men back down the island toward their boats. Fighting continued during the retreat, but General Anderson and his men eventually made it to the boats, and away from Santa Rosa Island.

Although Florida didn’t see many battles during that time. Fort Pickens was one of four forts to be under Union control in a southern state.  First Lieutenant Adams Slemmer moved a single artillery unit from Fort Barrancas to Fort Pickens. The Confederates had control of Forts Mcree and Barrancas. Out of all the forts stationed in the Pensacola Bay, Fort Pickens was the strongest. It exchanged artillery fire on Nov. 22-23, 1861 with Confederate batteries at Fort McRee and Fort Barrancas, and on Jan. 1-2, 1862 with Fort Barrancas. With union troops in the southern regions holding Fort Pickens; supplies would be low. They are surrounded by hostile forces. They’re running out of food, and ammunition. It is true that Fort Pickens is the strongest out of all 4, but the men hold the fort needed supplies to keep going. (Civil war battle.com)

As it states on the Civil War battle website “On January 24th Captain Israel Vogdes was ordered to go to Fort Pickens to reinforce the garrison there. Captain Vogdes arrived in Pensacola on February 6th.  He was not permitted to land his troops and reinforce the fort. When he arrived at Fort Pickens the Captain received a message from the United States Secretary of War Edwin Stanton and the Secretary of the Navy ordering him not to reinforce Fort Pickens. He was instead to only deliver the supplies but to keep his men on board his ship anchored near the fort. He was only to reinforce the fort if it came under attack, or if it was in danger of being attacked” (civilwarbatlefields.gov). A truce was made between the Florida government and the united states government. Fort Pickens would be allowed to get the supplies they need but not be reinforced. If Fort Pickens is reinforced, then Confederate soldiers would attack the fort immediately. That truce was broken. Colonel Brown landed arrived in the Pensacola bay and took his men to Fort Pickens. (civilwaracadamy.com)

Of the attacking Confederates, 18 were killed, 39 wounded, and 30 men were captured. The Union army lost 14 killed, 29 wounded, and 24 men captured. During the battle, Brigadier General Richard Anderson suffered serious wounds. Today, Fort Pickens and the site of the Battle of Santa Rosa Island are a part of the Gulf Islands National Seashore, where visitors can still see the fort."*

In 1949 the Fort Pickens Military Reservation was purchased by the State of Florida from the federal government. The Fort itself and 87 surrounding acres were transferred to the State through the Historic Surplus Property Program. The property was transformed into the Fort Pickens State Park, with adjacent areas serving as Escambia County recreation areas. In view of lack of local resources and concern over the deterioration of the historic forts along the bay, including Fort Pickens, in 1971 Congress established Gulf Islands National Seashore and the property was transferred to the National Park Service.

The Fort Pickens Area of the National Seashore is a destination for some 700,000 visitors annually and is one of the largest tourist attractions for the heavily tourist-dependent economy of the Pensacola and Pensacola Beach area. In addition to the Fort Pickens historic site, the grounds provide visitors with recreational opportunities for swimming, beach activities, fishing, shelling, hiking, bicycling, camping, and educational programs focused on its diverse marine and land ecosystems. A five-month project was conducted, the work began in November 2017.  This critical work will preserve one of many forts built in the 1800s. The project included cleaning, repairing the inside the fort and replacing the bricks and repointing the new bricks. Removing mold, vegetation, and mildew as well. today it is the enduring symbol of the united states (nps.gov).