Fleeing conspirators John Wilkes Booth and David Herold spent four and a half days in a pine thicket near a swamp to evade federal troops seeking those guilty of President Lincoln’s death. With the help of Confederate sympathizers and plenty of whiskey, the traitors managed to remain hidden until they could gain passage across the Potomac River.

Near this marker, Booth and Herold sacrificed their horses, despite Booth's broken leg, to avoid capture by Union soldiers. The horses could be heard outside the thicket, so Herold led them into a swamp and shot them. (Photo source: HMdb.org.) 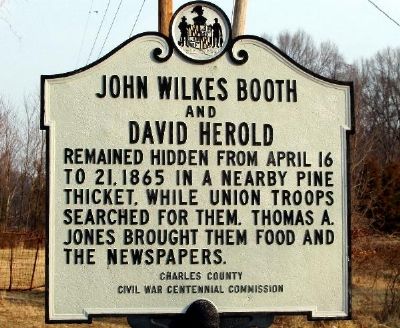 The "pine thicket" is located at Rich Hill in what is now called Bel Alton, Maryland.  The marker is located at the intersection of Bel Alton Newtown Road and Wills Road.

On April 16, Booth and Herold arrived at Rich Hill, the home of Confederate sympathizer Colonel Samuel Cox.  The two fugitives were given food and a place to sleep, but Cox’s home was too well known.  Cox led the two men into a ‘pine thicket’ where they would wait for another sympathetic smuggler, neighbor Thomas Jones.  Jones hid the men in a patch of woods near his house, giving them food and other aid.  There Booth and Herold waited four and a half days until they got passage across the Potomac River.  Cox was later convicted for assisting Booth’s escape.

Booth and Herold were not safe in the woods near Jones’s home.  Soldiers were passing by too closely and Jones, fearing the horses might betray their position, instructed Herold to dispose of them.  Herold led his horses into a nearby swamp concealed by pine trees and shot them.  After four and a half days, Jones took the fugitives to Dent’s Meadow where they use one of Jones’s boats to cross the Potomac.  They made their crossing but were unaware that they had been spotted by a colored man who reported them.