This market was placed by the Society of Colonial Wars and the Ohio Historical Society in 1992. 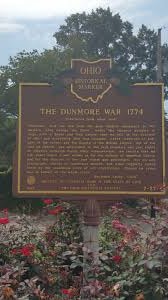 Growing conflict between settlers and Native American tribes led to the killing of members of the Seneca tribe in early 1774. Two of those killed were related to Chief Logan, an important Mingo Chief, causing his tribesmen to demand vengeance. Despite agreements of protection between the British and the Ohio Valley tribes Logan began launching raids on white settlers. His attacks killed thirteen people in western Pennsylvania before he returned to his tribe.

In response, the British garrison at Fort Pitt and the Colonial Governor of Virginia, Lord Dunmore, prepared to retaliate. A force of over one thousand men under the command of Colonel Andrew Lewis traveled through the Kanawha valley towards the Ohio River. Their orders were to construct a fort where the two rivers met at Point Pleasant and then attack the Ohio Valley tribes, particularly the Shawnee. At the same time Lord Dunmore, who commanded a similarly sized force, marched to Point Pleasant from Fort Pitt. After arriving at Point Pleasant, Colonel Lewis's army was surprised by the attack of one thousand Shawnee warriors under Cheif Cornstalk on Oct. 10, 1774. The battle lasted five hours, despite the initial surprise of the attack the Shawnee were forced to retreat.

Following the battle, Lord Dunmore arrived at Point Pleasant and crossed the Ohio river traveling towards the Shawnee villages with his army. He stopped and created Camp Charlotte, where he demanded that the Shawnee come and discuss terms. The Shawnee, Seneca, and Mingo agreed in the Treaty of Fort Stanwix that they would only settle and hunt west of the Ohio River, allowing the land east of the river to be settled by white colonists. Some historians would claim that Lord Dunmore's War was the first act of the Revolutionary War, but it is more commonly depicted as another conflict between Native American tribes and encroaching colonial settlers.

The map marker commemorating the war is located in Gallipolis, Ohio, near the Gallia County Courthouse. Other monuments can be found at Point Pleasant, West Virginia.