Currituck Beach Lighthouse was completed on December 1, 1875. Unique from the other lighthouses throughout the Outer Banks, this light was not painted-it kept its red brick exterior. The lighthouse was fully operated by people until 1939, when it became automated. After years of restoration efforts, in 1991, visitors were once again allowed to climb the original 214 steps to the balcony at the top of the lighthouse. In 2003, the still-operational Light Station was conveyed by the U.S. Government to the Outer Banks Conservationists through the National Historic Lighthouse Preservation Act. 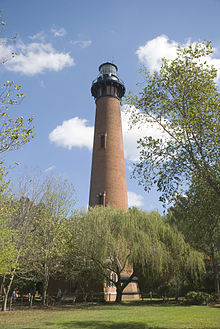 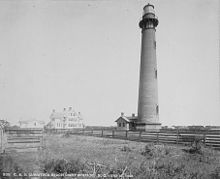 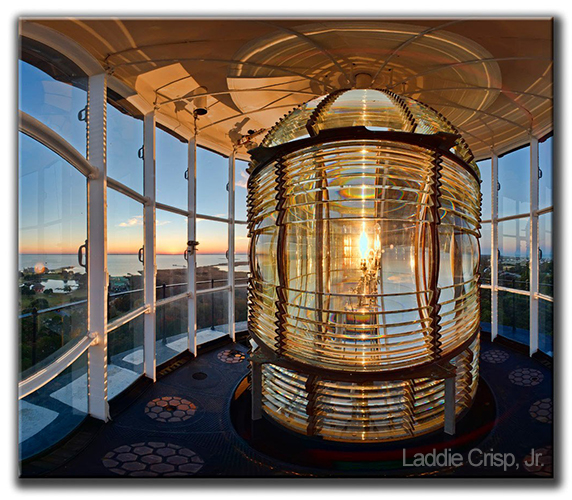 View from the top of Currituck Lighthouse 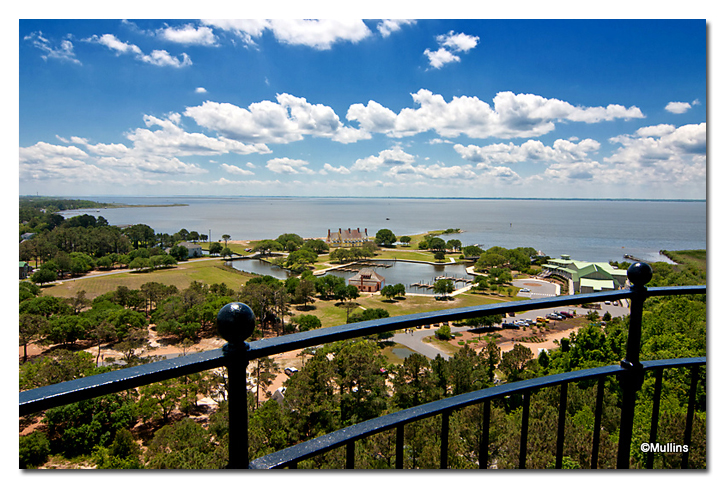 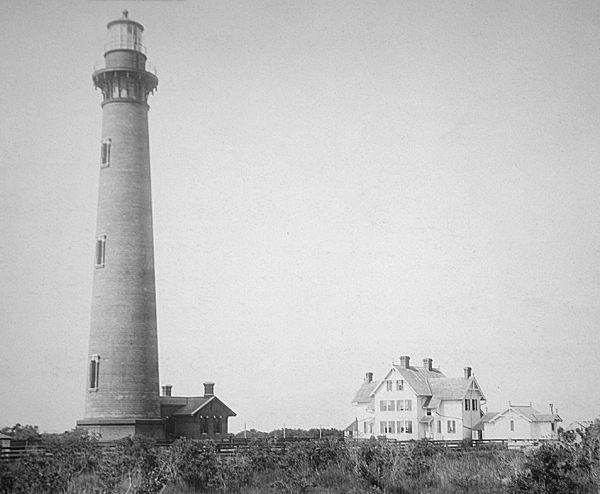 Located between the Cape Henry Light and Bodie Island Light on the outer banks of North Carolina, the Currituck Beach Light was the last major brick lighthouse built in the area.  In 1872 the U.S. Lighthouse Board stated ships, cargoes, and lives continued to be lost along the 40 miles of the coastline that lay beyond the reaches of existing lighthouses. In response, construction began on the Currituck Beach Lighthouse in 1873 under the direction of Dexter Stetston, who had previously overseen the construction of the new lighthouses at Cape Hatteras and Bodie Island, and the tower was completed two years later. To distinguish the Currituck Beach Lighthouse from other regional lighthouses, its red brick exterior was left unpainted. The 162-foot tower features an interior cast-iron spiral staircase and a first-order Fresnel lens.

In 1876, when the keeper’s house was completed, two keepers and their families shared the duplex in the isolated seaside setting. The keepers were removed after the Lighthouse was automated in 1939. During World War II, coastguardsmen were stationed at the lighthouse to patrol the nearby beach, but after the conflict, the station’s usefulness declined, the property was abandoned, and by the 1970s the tower and the dwellings had fallen into disrepair. Concerned about the preservation of the historic property, Outer Banks Conservationists, Inc., a private non-profit organization dedicated to the conservation of the character of the Outer Banks of North Carolina, signed a lease with the State of North Carolina in 1980 to begin a phased restoration of the property. The lease charged the group with the responsibility of restoring the keeper’s house and improving the historic compound. In 2003, the still-operational Light Station was conveyed to the Outer Banks Conservationists through the National Historic Lighthouse Preservation Act.

The Light
The lens is the Currituck Beach Lighthouse is quite special. The lighthouse is known as a first order lighthouse, which means the lens is the largest of the seven Fresnel lens sizes. The light was originally a Funck's hydraulic float lamp, powered by lard oil and four concentric wicks. Around 1884, the switched from lard oil to mineral oil (also known as kerosene) and had five concentric wicks. In 1913, an incandescent oil vapor lamp was used where the vapor was forced into the burner by a hand pump.

The lighthouse was completely automated in 1939 and the Coast Guard took over the duties and responsibilities of the lighthouse. A computer was installed which controlled when the lights in the lamp were turned on and off. The lamp consisted of four-1000 watt bulbs of which only one was on at a time. The other three bulbs served as backups, if one bulb went out, another would turn automatically turn on. The light has a 20-second flash cycle and can be seen for 18 nautical miles, if conditions permit. The lamp only consist of two bulbs now since lights last longer than in the past.