In 1805, Detroit was named the capital of the newly-created Michigan Territory. On June 11, 1805, Detroit suffered a devastating fire, which left only a few buildings intact. A new plan was put forward by Chief Justice Augustus B. Woodward to create a new layout for the growing city. The plan would be based on a design similar to Washington, D.C.’s layout, with a “spoke-and-wheel” or honeycomb pattern of streets and wide boulevards. Woodward’s plan for Detroit was only partially implemented, being unpopular with residents who were impatient to get the city rebuilt. However, certain aspects of Woodward’s plan can be seen in the triangular and half-circle public spaces around the city, and in the diagonal main streets, like Woodward Avenue, named after its designer. 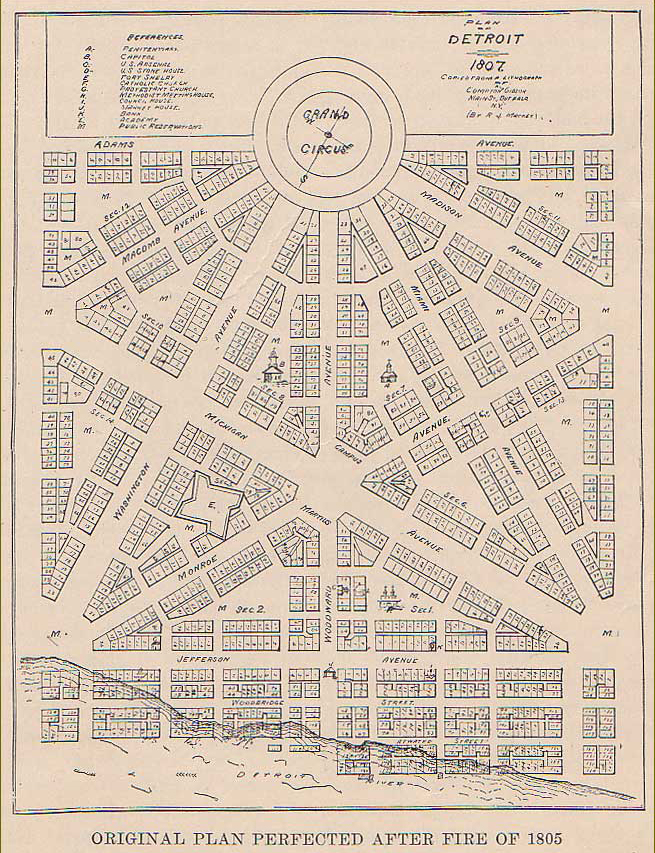 Judge Augustus Woodward, with the Woodward Plan hanging on the wall behind him 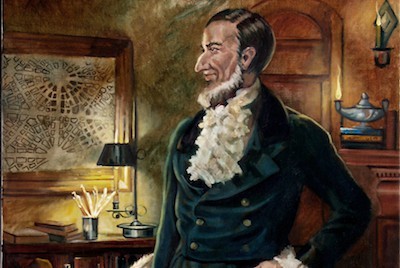 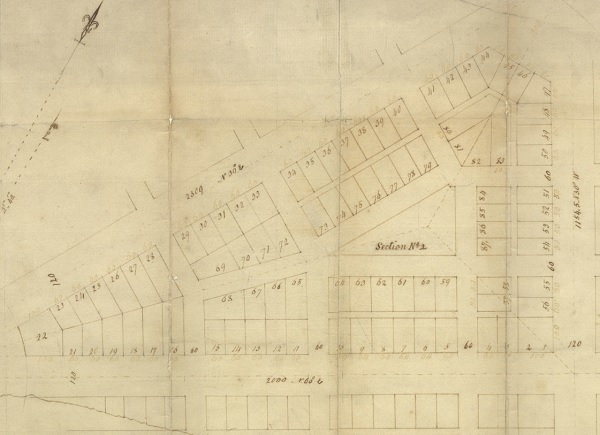 A comparison between L'Enfant's design of Washington, D.C. and Woodward's plan for Detroit 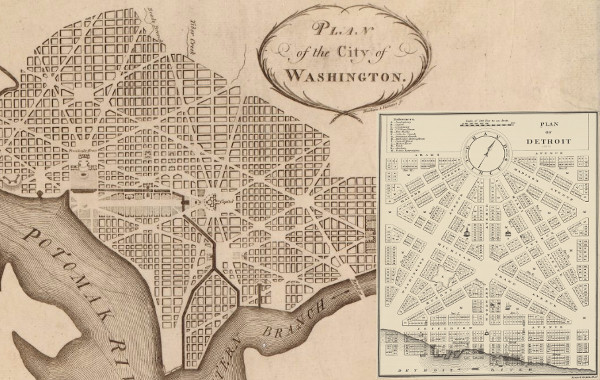 A view of Detroit's streets, showing how only part of Woodward's plan was implemented, and the rest was abandoned in favor of a traditional grid pattern. 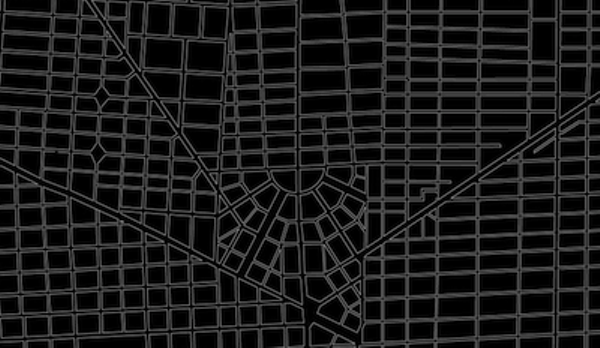 Examples of the Woodward Plan exist today in the form of several spaces around Detroit, including Capitol Park 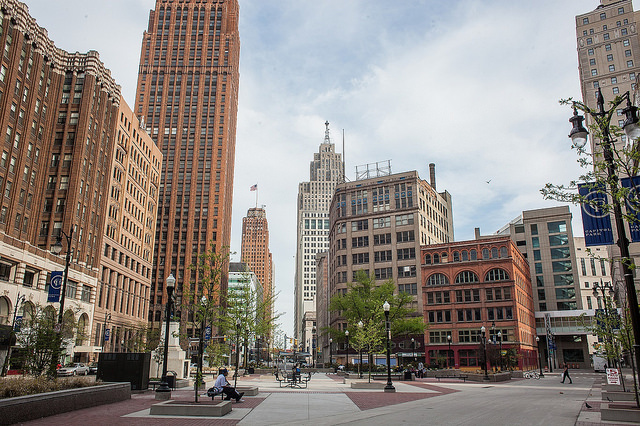 Grand Circus Park, originally intended to be a whole circle from which the rest of the Woodward's Plan radiated 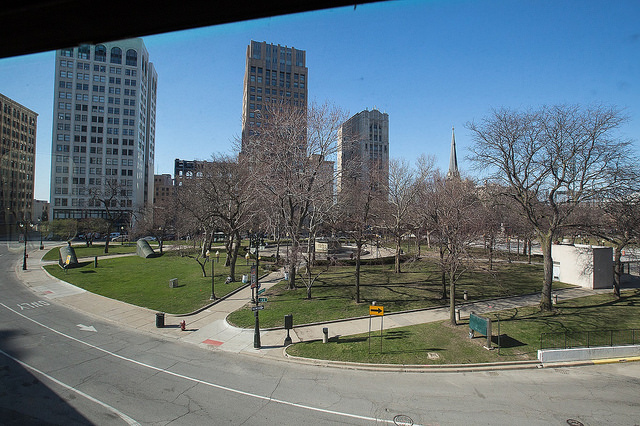 Augustus Brevoort Woodward was born in 1774 in New York. He graduated from Columbia College and became Washington, D.C.’s first practicing lawyer.1 He was described as being quite eccentric, a lifelong-bachelor, and a workaholic who slept in his disorderly office and had few friends. He was well over six feet tall, lean, and stooped; some said he resembled Ichabod Crane.2 Woodward was appointed Chief Justice of Michigan Territory in March 1805 by a personal acquaintance, Thomas Jefferson. He arrived in Detroit just three weeks after the fire that completely leveled the city, leaving only a few buildings intact. Governor Hull and Woodward discussed a plan for the rapidly growing city, and Woodward was appointed to oversee the layout.3

Woodward’s plan was built around an idea that was first brought to the U.S. by architect Major Pierre Charles L’Enfant who had planned Washington, D.C. L’Enfant’s concept for Washington actually came from European city layouts in ancient Rome and 19th-century aristocratic France. Woodward’s plan involved diagonal streets radiating out from major city sites, with public spaces being carved out in squares, circles, and triangles. “The complicated plan involved a repeating hexagonal shape to contain smaller triangles, divided by broad thoroughfares that would continue through the city, with a ‘Grand Circus’ at every major intersection, and smaller spaces reserved for public purposes. The scheme was also novel in that it had roads of different widths. The thoroughfares coursing through the city would be 200 feet wide lined with elliptical groves; secondary roads would be 120 feet wide and lined with trees; minor streets were still a generous 60 feet across. The slimmest streets were deep in the interior sections, where the noise of the city would find it hard to intrude.”4

Woodward traveled to Washington to get approval for his plan, and it was implemented in the summer of 1806. Lots in the new plan were put up for sale, with landowners in the old town getting equal amounts of land under the new plan.3 All of this took so much time, however, that residents were growing restless. They were ready to rebuild, and even with the city recovering from ashes, the population was growing. While Woodward was away in Washington in the fall of 1817, residents finally won out, and government leaders agreed to start selling land in right-angled, 160-acre farms to the north of the city.4 Woodward was furious, but there was a strong momentum behind Detroit’s growth into a bustling metropolis of the West.

As the city expanded and grew rapidly, the Woodward Plan was abandoned in favor of a standard grid pattern. The result is an odd aerial view of grid streets clashing with diagonal streets. Although it was not allowed to expand outward to the rest of the city, much of the Woodward Plan still exists today in the half-hexagon that makes up downtown Detroit. It is especially obvious in places like triangular Capitol Park, Campus Marius, and the semi-circular Grand Circus Park. One of the main roads radiating diagonally out from downtown was named Woodward Avenue after its designer, whose work is more readily appreciated by many today.

Woodward stayed in Detroit even during the British occupation of 1812. He was one of the co-founders of the University of Michigan, the state’s first college, which opened in 1817. After almost two decades in service in Detroit, he was reappointed to a judicial post in Florida Territory, where he died in 1827.1 No copy of his original plan survives, but last anyone knew, it “fell into the hands of Aaron Greely, surveyor, in whose house it was seen in a broken window, keeping out the weather, and in whose hands it disappeared.”2