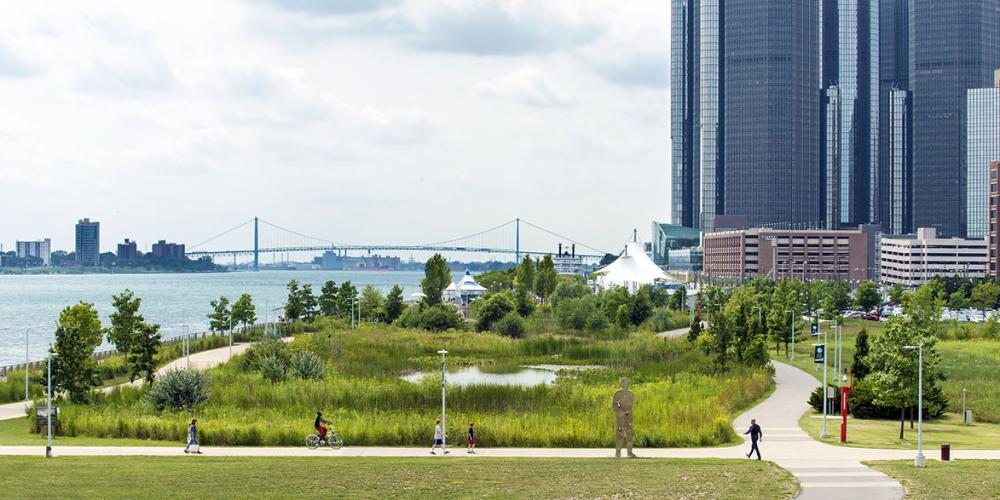 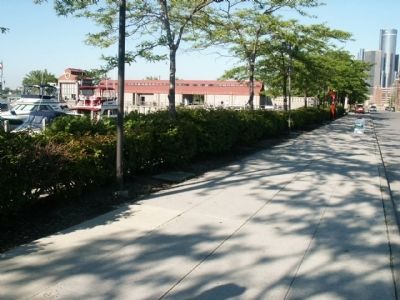 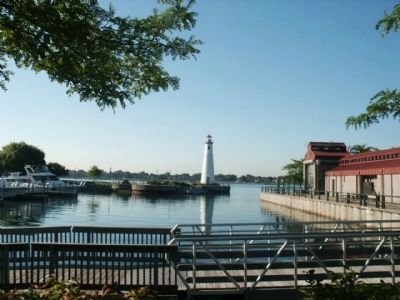 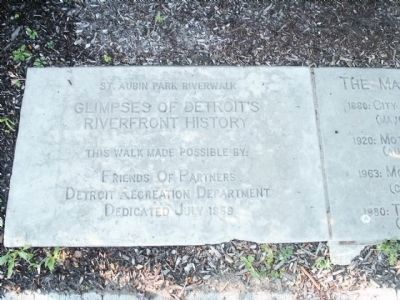 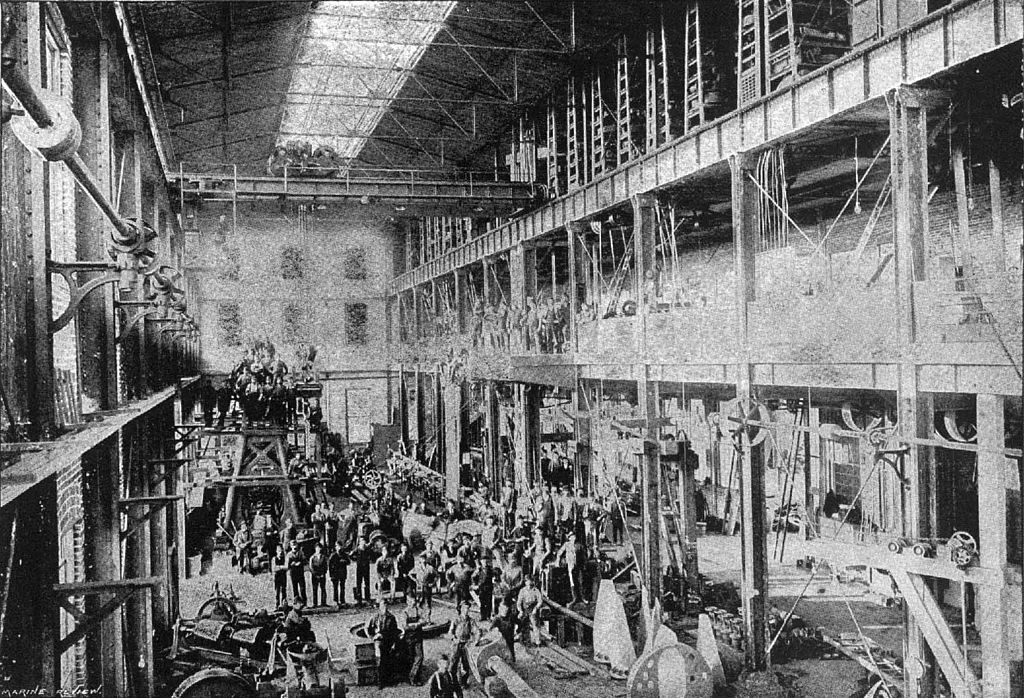 Another shot of the Dry Dock Co. machine shop in 1894 (image from Wikimedia Commons) 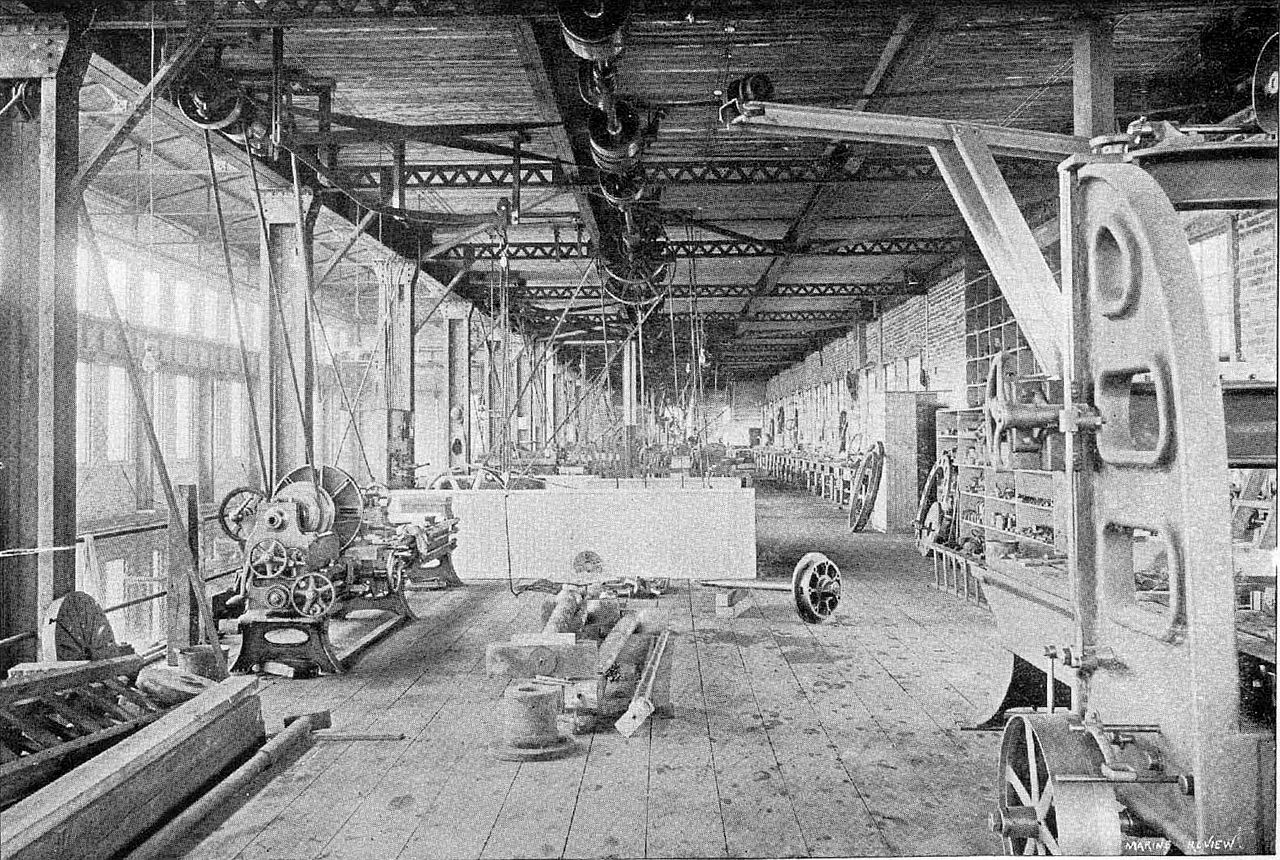 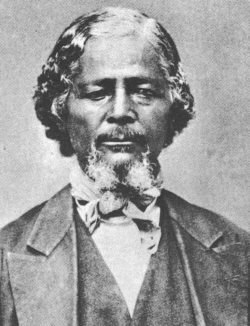 The first Europeans to settle the Detroit area were the French, who first arrived in the 1600s and established a fort and trading post early in the 1700s [5; 7]. In the mid-1700s the British took over the area, and in 1796 surrendered it to America. The U.S.-Canadian border at Michigan was established in 1812 [7]. Detroit had been an important international merchant settlement since at least the 1760s, and became more so as access to the East Coast and Lake Superior opened up with the construction of the Erie Canal and Soo Locks (in 1825 and 1855, respectively). Docks, warehouses, lumber and steel mills, and shipyards sprang up along the riverfront [2; 7]. The Detroit River's importance in the 1850s was not limited to its industrial uses; Detroit also became a key point along the Underground Railroad—the last stop before escaped slaves reached the safety of Canada (see Finney Barn and Gateway to Freedom International Memorial for more information). Commemorated in the stones of St. Aubin Park Riverwalk is Benjamin "Pap" Singleton (1809-1900), a Tennessee slave who was sold to the Deep South and escaped to Canada [1; 6]. Singleton returned to the United States to open a Detroit boarding house which served as a station of the Underground Railroad. After the Civil War, he continued to move fellow African Americans out of the South throughout the 1870s and 1880s, first to Kansas and later to the island of Cyprus and to Africa. Though his later, international ventures were not as successful, Singleton had guided 20,000 migrants to Kansas, earning him the moniker "The Father of the Exodus," [1].

Another stone commemorates the Detroit Dry Dock Company, which was located at Atwater and Orleans Streets, near the series of markers (there is also a bronze monument of the Pioneer ship in the dry-dock in the park). This company shifted the shipbuilding industry of Michigan from Marine City to Detroit [4; 6]. Incorporated in 1872 by Captain Stephen Kirby, Dry Dock bought out Wyandotte Shipbuilding five years later and put his son, Frank,  in charge of the second yard [4]. Hulls for a variety of ship types were built at the Wyandotte yard, and finishing work and steam engines were installed at Dry Dock, which employed 600 skilled tradesmen by 1890 [4; 6]. Dry Dock was sold to the American Shipbuilding Company in 1899, though the Kirby family kept the Wyandotte Yard and Orleans Street facilities, renaming them the Detroit Shipbuilding Company; the company folded due to recession in the 1920s, and the industrial complex was renovated and recently reopened as The Globe Building, an outdoor adventure and discovery center for the park [3; 4].

One apprentice machinist who worked on steam engines from 1880-1882 at the Dry Dock Company was Henry Ford, who decided to put an engine into a carriage to create the first automobile [4]. By the time Ford Motor Company began attracting and recruiting skilled immigrant labor with good wages ($5 per day in 1914), Detroit's population was already composed primarily of immigrants and the children of immigrants (3 out of 4 people in 1910) [5; 6]. Work opportunities created by riverfront industries including the shipyards were a significant draw from the 1830s onward, as well as jobs in Detroit pharmaceuticals, copper ore, construction, agriculture, and machinery manufacturing—and booming Detroit, unlike cities on the East Coast, for the most part welcomed foreign workers [5]. Immigrants from Germany, England, Ireland, Canada, Russia, Poland, and other nations had settled in Detroit during the 19th century, and the Ford Motor Company helped triple the city's immigrant population by 1940, bringing in workers from Scotland, England, Belgium, Italy, Mexico, Libya, Ukraine, and the Balkans, as well as drawing workers from the American Midwest and South, particularly African American migrants [5; 6]. As migrant and immigrant populations grew, they started their own businesses, clubs, and restaurants. Another major wave of immigration began in the 1970s due to changes in national policy which lifted quotas limiting groups including Asians, Latinos, and Middle Eastern immigrants. Metropolitan Detroit has gained populations of Korean, Vietnamese, Chinese, Taiwanese, Filipino, Cambodian, Indian, Albanian, Iraqi, Syrian, Yemeni, Chaldean, Lebanese, Bangladeshi, Puerto Rican, and Mexican between the 1970s and today [5].

Meanwhile, the riverfront had become intensely polluted by the 1940s, and the riverfront was increasingly cut off as the years progressed [2; 7]. At one time, this section of the riverfront was known as St. Aubin Park, later renamed Tricentennial State Park, and is now Detroit's first urban state park, Milliken State Park and Harbor. Through the efforts of the Detroit Riverfront Conservancy, the riverfront now includes a long riverwalk with several parks, monuments, and gardens, including the facilities at Milliken State Park, such as the Globe Building in the old Dry Dock facility, a wetlands demonstration area, and the historic marker stones along the St. Aubin Park Riverwalk near the harbor and lighthouse [2; 3].

The Many Names of Detroit

Starting in 1852, this site was a busy shipyard. The Detroit Dry Dock Co. and later Detroit Shipbuilding Co., built and installed the steam engines and performed finish work on hulls produced at the Wyandotte shipyard. In 1890 the shipyard employed 600 boilermakers, machinists, shipfitters, carpenters and other tradespeople.

Detroit's riverfront industries and the automobile plants depended on immigrant labor. In 1910, three out of four people in Detroit were immigrants or children of immigrants. They came from a dozen nations, including Germany, England, Ireland, Canada, Russia and Poland. The immigrant population almost tripled over the next 20 years.

Stone 5:
"I have taken my people out in the roads and in dark places, and looked at the stars of heaven and prayed for the southern man to turn his heart."
-Benjamin Singleton, a Black man who guided runaway slaves through Detroit to Canada in the 1850s. [6]