Putnam Memorial State Park is the oldest state park in Connecticut. It is named for Major General Israel Putnam, who chose this site as the winter encampment for his men during the winter of 1778-1779, during the American Revolutionary War. Over 3,000 men were sent into winter quarters spread throughout three camps in Redding. The camps were established to keep an eye on the storehouses in Danbury, Connecticut, and to protect Long Island Sound and the Hudson River Valley. The Putnam Memorial State Park was first established in 1887 under the leadership of Redding resident Charles Burr Todd as a testament to the brave soldiers that spent their winter at the camp.

Monument to Israel Putnam, who served as a Major General during the American Revolution. It stands in front of the park's Visitor Center (Courtesy of the Putnam Memorial State Park) 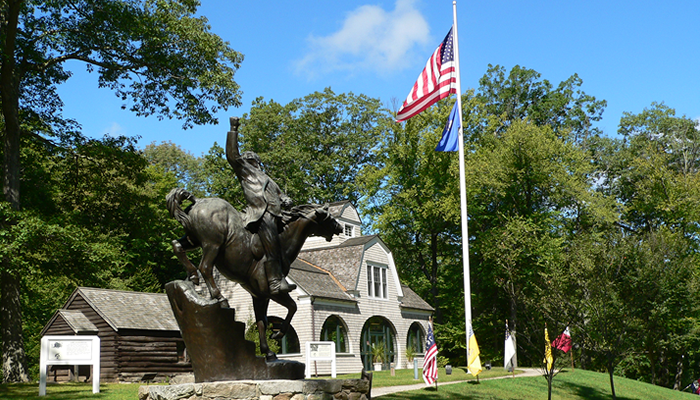 This obelisk stands as a monument to the soldiers of the American Revolution who camped here during the winter of 1778-1779 (Courtesy of CT Monuments.net) 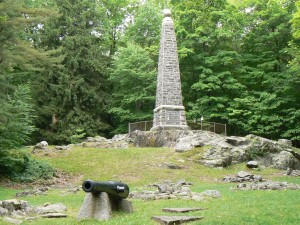 By the winter of 1778-1779, the Continental forces were deep into the American Revolution. They needed to establish their winter camp and chose this site, now known as the Putnam Memorial State Park. The park is named for one of the four major generals who served under George Washington. Israel Putnam brought his group of men to Redding, Connecticut for the winter. The 2nd Canadian Regiment or Congress' Own, under the command of Moses Hazen and the 2nd New Hampshire Regiment under the command of Enoch Poor were also stationed at this location. Many of these men were the same who had suffered at Valley Forge the previous winter. Their job was to guard the supply storehouses in nearby Danbury, which other forces had already pilfered. In addition, they could use this site to protect Long Island Sound and the Hudson River Valley.

Major General Israel Putnam was near the end of a long, storied military career.  A prosperous farmer during peacetime, he rallied to lead the revolutionary forces when he first heard about the battles commencing at Lexington and Concord. The patriot had previously helped to defend New England against the native people during the French and Indian War, about fifteen years earlier. He fought in attacks at Fort Ticonderoga and Montreal in 1759. Postwar, he had become an outspoken critic of British imposition and taxation, speaking out against things like the Stamp Act.  He was heavily involved in the Sons of Liberty. In 1775, he was plowing his fields when he heard about the shots fired in Lexington and Concord. He reportedly dropped his tools and rushed off to fight for the patriot cause. He led forces in the Battle of Bunker Hill and then in New York at Long Island and in the Hudson Valley. Eventually, he was put in charge of guarding the storehouse in southwestern Connecticut.

A paralyzing stroke in December 1779 ended Putnam’s military career. He died in Brooklyn, Connecticut in 1790. Almost a century later, the Putnam Memorial State Park was established in honor of Putnam and his men who spent the winter in the camp. It was the first state park established in the state of Connecticut (established prior to the creation of the Park’s department). Local historian and Redding resident, Charles Burr Todd, was instrumental in converting the land into a state park in 1887. In addition to the recreations of the forts and encampments, there are several monuments placed throughout the grounds. The monuments include several Civil War cannons, and obelisk, and a statue of Major General Putnam riding a horse down a staircase, in an apparent attempt to escape the British forces in Greenwich. Sculptor Anna Hyatt Huntington created the amazing piece for the park in 1967.  Today, there are many activities available at the park for its visitors, including re-enactments, the winter walk, school programs, a museum, and archaeological digs.