Drawing of the execution of the Randolph "Bud" Jr., Pharmer, and Tolbert McCoy by Hatfields 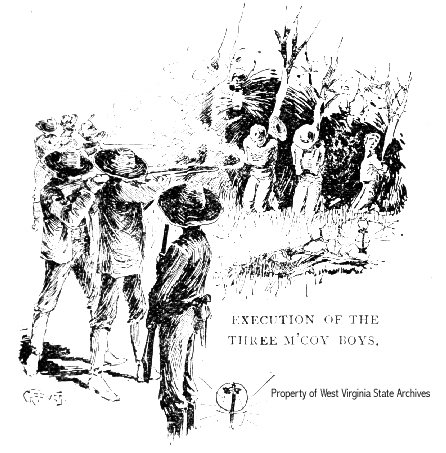 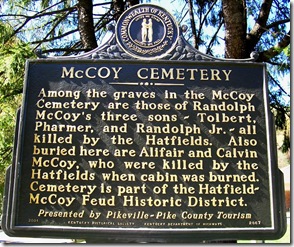 The first direct act of violence and what many consider the true start of the feud occurred at a local election in 1882. Ellison Hatfield and one of his brothers were in Kentucky and got into a drunken brawl with three of Randolph McCoy’s sons, Tolbert, Pharmer, and Bud. The brawl, which allegedly started because of a debt owed over a fiddle, led to Ellison’s death. The McCoy brothers stabbed him 26 times and then shot him in the back. The McCoy’s were arrested by Hatfields and were being taken to Pikeville to be tried for the murder of Ellison Hatfield, but Devil Anse had them captured and taken to West Virginia. Devil Anse told the McCoy boys that if Ellison died, they would be killed. Two days after this threat was made, Devil Anse’s brother Ellison died of his wounds.

The Hatfields took the McCoy boys into the woods and tied them to papaw bushes where they were shot a total of 50 times. All three boys were dead within five minutes. While the Hatfields viewed this as justice, their vigilante style revenge was still very illegal. Many of the men involved were immediately indicted, including Devil Anse and his sons. The Hatfields eluded arrest for an extended period of time. The governor of Kentucky requested that efforts be made for the removal of the Hatfields from West Virginia to Kentucky for trial. Governor E. Willis Wilson from West Virginia refused this request, which created tension between the states, but allowed the Hatfields to avoid arrest.

The McCoys were frustrated with the lack of justice for the murder of Randolph’s sons. Perry Cline, the man married to Martha McCoy who lost his land to Devil Anse Hatfield, used political connections to get the charges against the Hatfields reinstated and had the state offer a reward for their capture. Cline was fighting for his own revenge against the Hatfields who had taken thousands of acres of land he viewed as rightfully his.

This was viewed as a threat by the Hatfields, who began to formulate a plan of retaliation against the McCoys. In the early hours of January 1, 1888, Jim Vance, Devil Anse’s uncle, led a raid on Randolph McCoy’s cabin in Pike County, Kentucky. Hatifield men surrounded the cabin and began to fire while the McCoys were sleeping. The Hatfields then burned the cabin to force the occupants out. Two of McCoy’s children, Calvin and Alifair, were shot in the back while fleeing their home. Sarah McCoy, Randolph’s wife, was beaten nearly to death by the men and left by the burning house. There was nothing of value left of the house, so the McCoy family relocated to Pikeville to avoid the reach of Hatfield raiders.

After this raid, the Hatfields seemed to lose a lot of their power. Just days after the raid on the McCoy cabin, a posse lead by a man named Frank Phillips found and killed Jim Vance for his role in the murder of McCoy’s children. After this, the posse rounded up eight members of the Hatfield family and took them to Kentucky to face a trial for the murder of Alifair McCoy, the daughter of Randolph. The accused Hatfields were given life sentences for their crimes and Ellison Mounts, the illegitimate son of Ellison Hatfield was hanged for the murder of Alifair.