The Pinellas Point Temple Mound is an archaeological treasure surrounded by housing developments and modern streets in southern St. Petersburg. The Temple Mound is one of the only surviving remnants of a large Native American village active during the Mississippian Era (roughly A.D. 900. To A.D. 1500). Archaeologists believe that the Temple Mound was built around A.D. 1,000 and was occupied until the arrival of Spanish explorers on the Florida coast during the 1500s. Furthermore, significant evidence shows that the mound was built by Tocobaga tribes, who inhabited the area when Spanish explorers Panfilo de Narvaez and Hernando de Soto arrived. The Pinellas Point Temple Mound is thought to have been constructed from the shells of oysters and clams. In fact, the Safety Harbor area was celebrated among Tocabaga Native Americans for its vast marine ecosystem, and every year, Tocabaga Native Americans would gather by the hundreds to feast on oysters and clams. Among all the Tocabaga Mounds, the Pinellas Point Temple Mound is thought to be the best known. One of the most famous legends regarding the mound is the story between the Spanish explorer Juan Ortiz and the Tocabaga princess Hirrihigua (also called Ucita). The story of Hirrihigua and Ortiz is known as the Florida Pocahontas. 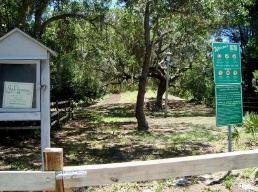 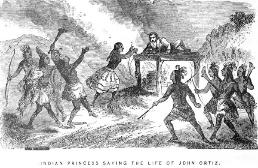 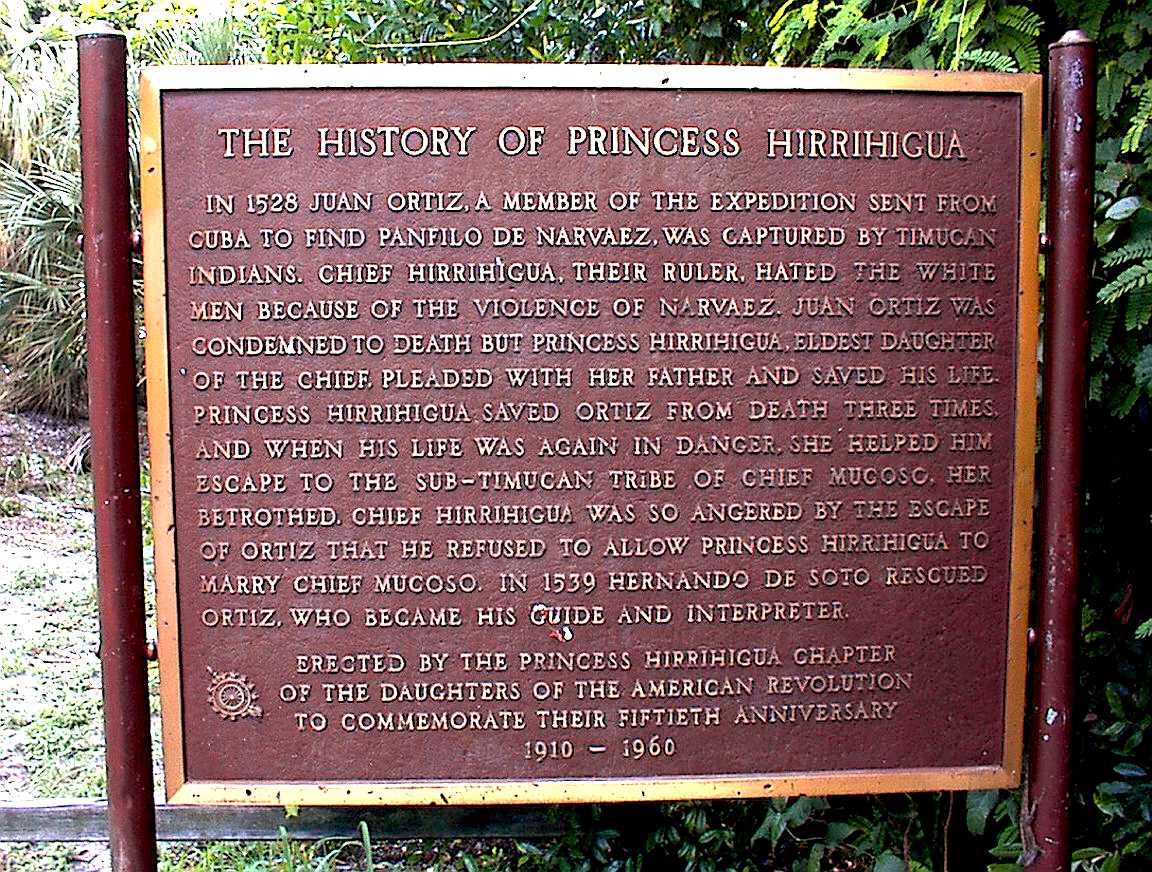 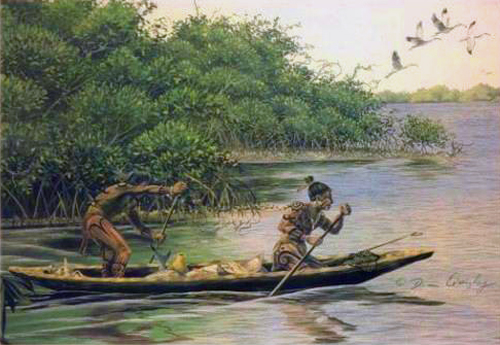 The builders of the mound are thought to be descendants of Mississippi Era Native Americans. The Mississippi Era occurred between A.D. 900 and A.D. 1500, and the Mississippians are named as such because they spread east from the Mississippi River, inhabiting many areas throughout the southeast. However, the tribes from this Era were spread among many different chiefdoms, although they did share common agricultural, ceremonial, and military cultures. The Native Americans who settled around the Tampa Bay area, and those who would eventually build the Pinellas Point Tocobaga Temple Mound, survived mostly on gathering shellfish and fishing.

Mounds at this time were built for various reasons. The mound at Pinellas Point is thought to have been a tribe temple, and it was a place to store essential religious relics and served as the home for religious practitioners. Archaeological evidence also shows that, nearby, there was a chapel where the dead were prepared for burial. Other mounds in the area were also constructed to be the home of the tribe’s chief.

Until nearly 2008, the Pinellas Point Tocobaga Temple Mound was decaying from mountain bike tracks, trash, and graffiti, among other issues. Since then, preservation projects were put into place by the Florida Archaeology Network and the University of South Florida.1

The Legend of Princess Hirrihigua and Juan Ortiz

One of the most endearing stories regarding the Pinellas Point Tocobaga Temple Mound is related to the relationship between Spanish explorer Juan Ortiz and Tocobaga Princess Hirrihigua (also known as Ucita). Before the arrival of Ortiz, the Tocobaga Native Americans and Spanish explorers had developed a worsening tension marred by violence. For example, when conquistador Panfilo de Narvaez landed near present-day St. Petersburg in 1528, Narvaez immediately proved himself to be an enemy of the Tocobaga by cutting off the nose of a chief named Hirrihigua and feeding one of the chief’s family members to the expedition’s war dogs. As such, the chief developed a deep hatred of the Spanish.

Juan Ortiz was on a search party from Cuba to locate the ill-fated Narvaez, and when Ortiz’s ship arrived at Tampa Bay, Ortiz and three others were surrounded by warriors and taken captive. The three men were killed in the plaza of the Hirrihigua village, while the 18-year-old Ortiz was destined to be tied to a large grill and placed over hot coals, with the goal of being roasted alive.

After a short period of being used as a slave, Juan Ortiz was tied to the grill with a lit flame beneath him. His screams filled the air, and several of the women rushed to his side to plea for his life. Among the women was the chief’s daughter, known in Florida tradition as Princess Hirrihigua. Ortiz was saved, but suffered severe burns and scars, which he carried for the rest of his life.

Ortiz later went to live with another area chief, who in 1539 set Ortiz free when several Spanish ships arrived in the bay. The Spanish ships were from Hernando de Soto; De Soto would use Ortiz as an interpreter in Soto’s ill-fated expedition.2

Inscription on the Mound’s Marker

The Tocobaga were Native Americans who lived in villages around Tampa Bay dating to about A.D. 1000. They lived near the water's edge where they subsisted on a wide variety of fish, shellfish, wild game, and a variety of plants from upland areas. Spanish explorers described them as well-formed, muscular people with a high level of civilization. Based on linguistics, the Tocobaga-language shares characteristics with tribes such as the Creek, Chickasaw, and Seminole.

The Tocobaga used many native plants for food and building materials. The sabal palm provided materials to make rope and roof thatch, and the heart of the palm is edible. The Tocobaga brewed their caffeinated "Black drink" from the yaupon holly.

The Tocobaga created many tools to assist them in their everyday living. These included tools made from shells, pottery and spears and arrows.

Tocobaaga villages were situated around a public area known as the plaza that was used as a meeting place. Central to the village were two or more mounds. One mound was often used for burials and the other was a temple mound, also called a platform mound. On top of the mounds would be one or more buildings. Spanish explorers indicated the more important villagers had their houses around the central public area and the less important villagers lived in huts farther from the plaza. Homes were constructed with poles that held up a thatched roof.

How were the Mounds built?

What is a Temple Mound?

A Temple Mound was a place of worship by the Tocobaga. It was a place where important religious relics were stored and their religious practitioners may have lived. Nearby was a structure known as a chapel house, a place where the dead were prepared for burial.

How are Indian Mounds relevant to us today?

Indian Mounds provide a link to the past and give us an opportunity to imagine what things were like prior to modern society. Archaeological studies of these sites show us how people lived and how they survived. Mounds remind us that people lived on a much simpler scale-no roads, houses, televisions or air conditioning. For Native Americans, mound sites are spiritual places where they can talk, thank, or pray to the people who lie there.

What happened to the Tocobaga Indians?

Spanish explorers arrived in the Tampa Bay area in April 1528 bringing both disease and violence. These two factors, combined with political infighting among other Indian groups, contributed to the disappearance of this Native American tribe. Although some Tocobaga members relocated to the Apalachee and St. Marks River areas during the seventeenth century, the remaining Tocobaga in the Tampa Bay area were destroyed when colonial raiding parties swept through Florida destroying Spanish missions and the Indians beginning in 1704. Remnants of the Tocobaga people are said to have been incorporated into various Seminole bands in the 1700s.3