The Beauchamp family history saturates the small town of Elizabeth in Wirt County, West Virginia. This historic home-turned-museum is the oldest and one of the most prolific in Elizabeth. It was built in 1840 by Alfred Beauchamp, grandson of Wirt County's first settler, William Beauchamp. The settled territory became known as Beauchamp's Mill, until it was renamed in honor of Alfred's wife Elizabeth Burns. The home would become the most influential building in Wirt County's early history, as it became the meeting house for the first county administrative court when Wirt County was established on January 19, 1848. The Virginia General Assembly would bestow this on Beauchamp in a bill that formerly established and delineated Wirt Country from Jackson and Wood County. This became a reality, when on May 23, 1848, the first county court session convened. In addition, the house became the location for the first circuit court session on April 4, 1848, led by Judge David McComas. That same day Arthur I. Boreman, future first governor of West Virginia, was granted permission to practice law in the commonality when the the first bar was established during this meeting. Today the Daughters of American Pioneers manage the home as a museum open to the public. 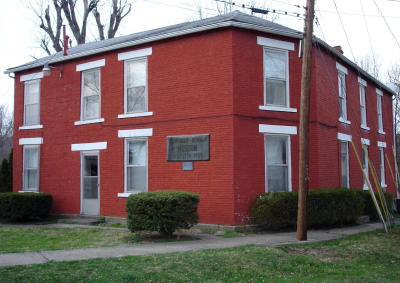 One of the main attractions, Elizabeth's piano. Courtesy of Bob Hurr 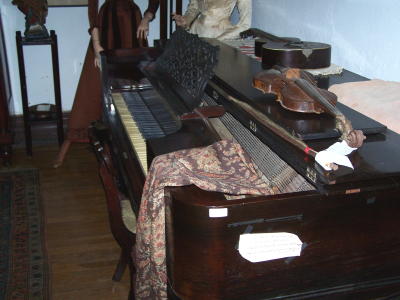 The dining room, where influential people, like the Beuchamps, probably had discussions about the creation of Wirt County. Courtesy of Bob Hur 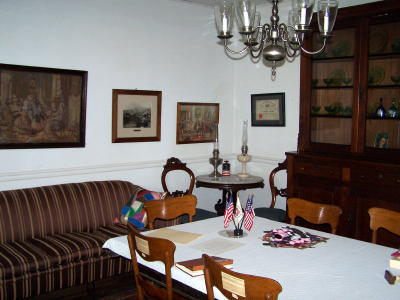 This house has a simple, nineteenth century, gable roofed design. The exterior appearance cannot be traced to one distinct style or popular form of architecture, but rather a myriad of styles were used in this design. Red, "common-bonded" bricks, stone window sills, and a stone foundation are the prominent materials used in the construction of the house, with a molding that extends all the way around the house. Beauchamp used his slaves to create the bricks by hand from clay deposits1. This physical appearance of the building has been altered; for example, when the Beauchamp family owned the house, Alfred used the northwestern entrance as an entrance for his general store, but when the Daughters of American Pioneers bought the residence, this was sealed off because of an added porch. The porch was removed, which revealed the stone doorsill of Beauchamp's general store2. In addition, in 1900, a two story section was appended in this northwestern corner, but covered with siding in the succeeding years.

The preservation of this home and the history of Wirt County is the work of a dedicated group of women, the Daughters of American Pioneers, as well as other Wirt County residents. The community worked together to collect and donate artifacts from the late eighteenth and nineteenth centuries and turned the Beauchamp-Newton house into a museum. Some of the artifacts include Elizabeth's grand piano in the parlor, Beauchamp's original desk , a handmade cradle from 1862, an (unusual for the time period) walk-in and sit-down tub, and a rope bed.1. The "doll room" contains a period doll carriage, dolls, and clothing.  The museum also houses historical documents from the first county court and documents that pertain to the founding of Wirt County, like the original county seal, property and pictures of early residents.

Admission to the museum is free and the building adheres to ADA guidelines- it is wheelchair accessible. Each year, the museum, the Little Kanawha Hotel, and the McClung-Morgan House are open for tours during Pioneer Day, a celebration hosted by the Beauchamp Chapter of American Daughters of Pioneers, to explore the rich early history of the pioneers of Wirt County. According to Wirt County residents, this day in October is the most busy for the museum. This building was placed on the National Historic Register of Places in 1974.