Built by Clifton Barlow in 1903, the Barlow House now serves as a local history museum that showcases Vivian Barlow's collection. The house served as a home to Clifton's large family. The museum is possible thanks to the efforts of Barlow's eldest child, Vivian Barlow, who inherited the house and preserved historically significant items over the years. 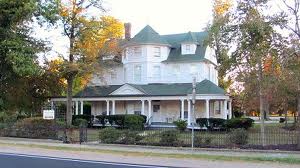 Thomas Barlow family acquired this land as part of a four-hundred-acre parcel in the spring of 1849. Thomas built a small log cabin to shelter his family as he worked the land and eventually acquired the means to build a frame house. The current home was constructed much later, in 1903, and reflects the rising fortune of the eldest Barlow child, Clifton Barlow. After inheriting the property, Barlow oversaw the construction of this much larger Victorian-style home. Clifton and Carrie Barlow raised their six children in this house.

The eldest of those six children, Vivian Barlow, inherited the house. Vivian traveled a great deal and accumulated a substantial collection of items from around the world and also served the war effort in World War I. Barlow's uniform can be viewed inside the museum along with a wide variety of items that are unique and reflect the history of an era. The museum allows visitors to see pieces of what the early 20th-century world was like in many different parts of the world.

The artifacts vary greatly. Some as family memorabilia, such as photographs, or Carrie Barlow's wedding gown. There are also family portraits and antique jewelry. Other such items sourced from outside of the family include various Chinese decorative items and glassware from various European regions.