Erected in 1910, the 10-story Denver Gas & Electric Building (also known as the Public Service Company Building) once served as a single vast advertisement for the wonders of electricity, thanks to the 13,000 lightbulbs embedded in its white terra cotta façade. The bulbs went dark for a time after World War II but were rewired in the 1990s, and the building once again lights up Denver’s central business district each night. Designed by local firm of Frank E. Edbrooke & Company, the building is an example of the early skyscraper style pioneered by Louis J. Sullivan of Chicago. The geometric patterns created by the bulbs, along with dramatic details such as the arched tenth-floor windows, ensure that the building is a striking sight by daylight as well.

The Denver Gas and Electric Building lit up at night. 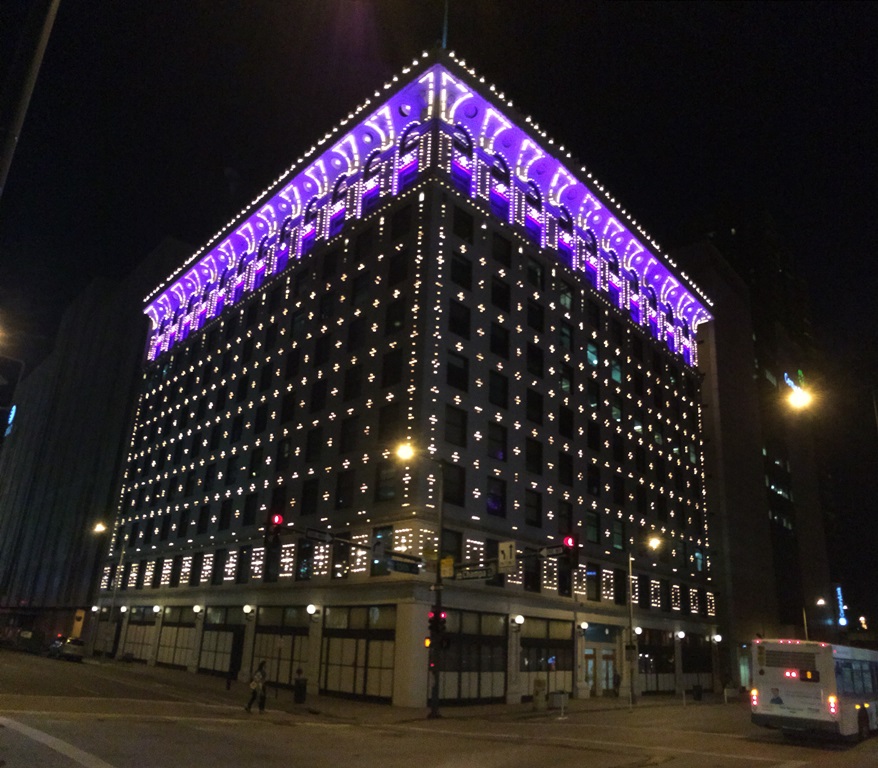 The Denver Gas and Electric Building unlit during the day. 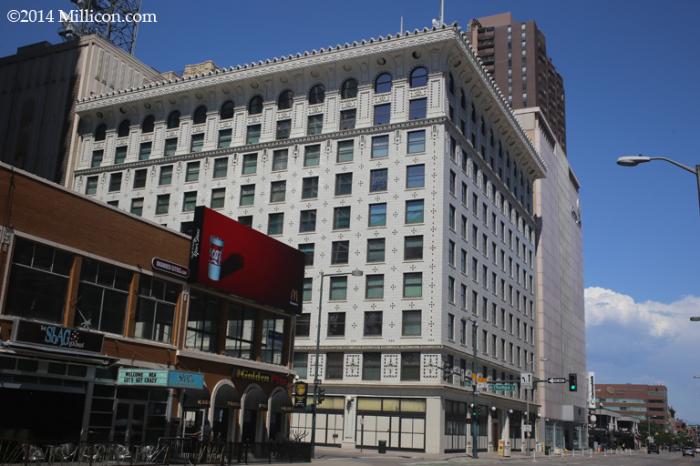 The Gas and Electric building in post card form. 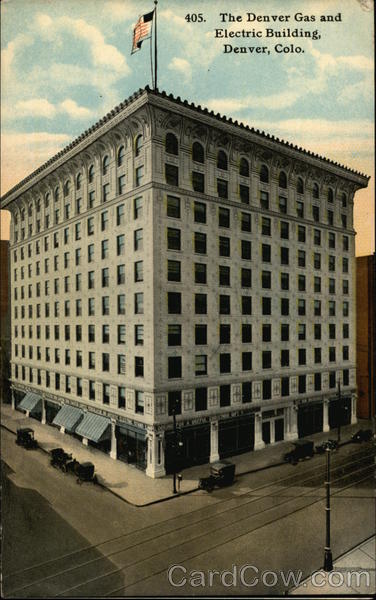 In the early years of the twentieth century, Denver promoted itself as the “City of Lights”, thanks to its newly illuminated downtown skyline, anchored by the “best lighted building in the world”, at 910 15th Street.  Built in 1910 to house the newly consolidated Denver Gas & Electric Company, the Gas & Electric Building provided visual evidence of the new prominence of electrical technology in American life and of Denver’s status as a modern city.

As one of the rapidly growing “instant cities” of the American West, Denver provided an ideal market for utility companies seeking to promote electric- and gas-powered appliances as a necessary element of the modern home. An early photograph of the building shows a sign claiming "The Christmas gift will please if it's an electric iron, chafing dish, toaster, coffee percolator or artistic electric stand lamp - looking for a useful Christmas gift? - see our household electrical appliances" ( http://digital.denverlibrary.org/cdm/ref/collection/p15330coll22/id/1501). For more information on this era, see Cities of Light and Heat: Domesticating Gas & Electricity in Urban America by historian Mark H. Rose, which follows the growth of utilities in Denver and Kansas City.

Officially the work of local architectural firm Frank E. Edbrooke & Company, the building’s design has been attributed to Frank Edbrooke’s nephew, Harry J. Edbrooke, who would go on to create many notable structures in Denver after establishing his own firm in 1913. The building exemplifies the new American “skyscraper” style created by the Chicago architect Louis J. Sullivan in the late 1800s, when steel-frame construction and the invention of the elevator made truly tall buildings feasible. The Gas & Electric Building echoes Sullivan’s pioneering designs, especially in its three-part design and its use of ornament. The lower stories form a solid base below an eight-story shaft crowned by an overhanging cornice.  The arched tenth-floor windows seem to flow upward into the curving cornice, providing a contrast to the simple squared-off forms of the middle stories.

What really makes the building stand out, however, are the 13,000 light bulb sockets embedded in the bright white terra cotta of the façade. The lights trace the outlines of the building while creating geometric patterns of their own.  In the building’s early days, it was referred to as “the best illuminated building in the world”, and around 75,000 people – roughly a third of the city’s population at the time – attended the initial switching-on of the lights. The ornamental lights remained in use until World War II gave rise to mandatory Blackouts. The building was renamed the Insurance Exchange Building and the lights fell into disuse after the Public Service Company of Colorado (Denver Gas & Electric’s successor) moved to a different location in 1962. The building was restored and the lights re-lit in 1990. It is listed on the National Register of Historic Places.