The American Cave Museum and Hidden River Cave offer a place for information and recreation. The Museum exhibits the long history of the cave system: from hydroelectric plant, to near sewage, and the revitalized to a tourist attraction. The Hidden River Cave is available for private and guided tours. The Cave is now completed with recycled material to show the importance of respecting the environment. 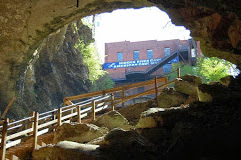 The Hidden River Cave is found just outside of Horse Cave and a few miles north of Mammoth Cave. The cave first opened to tourists in 1916. Initially, the cave was used as a source of hydroelectric power for the city. However, as industry continued to grow in the area the ground pollution started to seep into the cave. After the pollution began in the water, the town began dumping trash into the cave as well as routing the cities raw sewage through the river. The town closed the cave as the smell became too much. In 1989 the town had enough of the smell, which was noticeable through the town, and a sewage treatment plant was built to rid the cave of the pollution.

The Museum offers an exhibit that explains the long history of the cave and the town. It also includes basic information about caves, including replicas of standard cave formations. The Museum also explains ecological solutions to trash and sewage dumps.

The cave is also open for touring. Both guided and private tours are available. The cave is currently set up with viewing decks made from recycled material, which helps to punctuate the cities dedication to environmentally friendly practices. The cave is devoid of natural formations.