The Adsmore house was built in 1854 by John Higgins, a local merchant. The building was originally designed in Greek Revival style but was renovated several times. In 1984 the home was donated to the George Coon Public Library system with the understanding that it would be restored as a museum. Tours are conducted daily through the home, which still contains period furniture. Adsmore is also frequently used for both private and public special events. 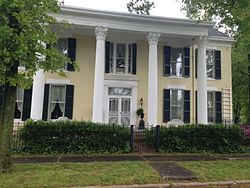 John Higgins, a wealthy merchant, built the original Adsmore house in 1854. The home was in a classic Greek-Revival style. After the home was purchased by John Parker Smith it underwent extensive remodeling and was redecorated in the Colonial Revival Style.

In 1984 the home and all of the furniture within it was donated to the George Coon Public Library system. The home was slated to be a living history museum. It is currently the only living history home in Kentucky.

Daily tours are led through the rooms of the home. The tours are guided by costumed performers and focus on the early 1900s. Yearly events are held at the museum and the home is also available for private events.