The Mystic Seaport Museum is widely recognized as the nation's leading maritime museum. It is 19 acres in size and features a recreated New England coastal village and over 500 historic watercraft, four of which are National Historic Landmarks including the "Charles W. Morgan," which is the last 19th-century wooden whaling ship in the world. Constructed in 1841, it was once part of a 2,700-strong American whaling fleet. Visitors to the museum will learn from craftspeople, historians, musicians, and storytellers about what life was like for those who made a living from the sea in the 1800s. The museum also houses a research center that contains two million artifacts including scrimshaw, paintings, models, tools, ship plans, an oral history archive, film and video recordings, and over one million photographs. The center also features a large research library containing 75,000 books.

The Mystic Seaport Museum was established in 1929 and is considered the best maritime museum in America. 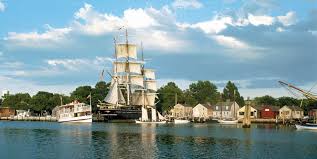 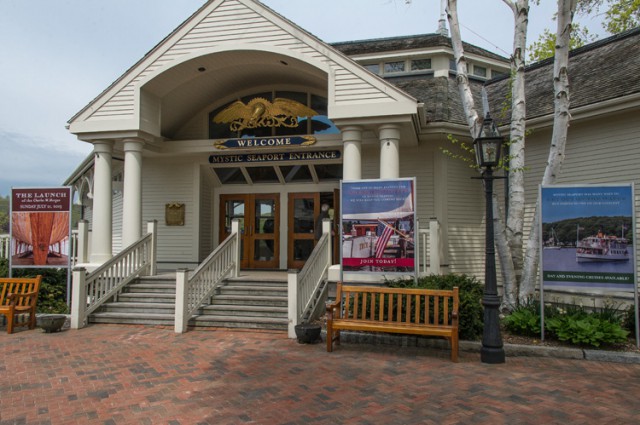 Long before Mystic Seaport’s ships, shops and shipyard, the banks of the Mystic River were filled with…ships, shops, and shipyards. Since the 1600s, this historic area has been a center of shipbuilding. Between 1784 and 1919–the golden age of American maritime enterprise–more than 600 vessels were constructed along the Mystic River. But with the advent of steam power and the decline of wooden shipbuilding after the Civil War, textile manufacturing became Mystic’s dominant industry.

As the great Age of Sail gave way to steamships and railroads, wooden ships and boats were turned into firewood and the nation’s seafaring traditions began to disappear, three Mystic residents decided to work together to keep the past alive.

On December 29, 1929, Edward E. Bradley, an industrialist; Carl C. Cutler, a lawyer; and Dr. Charles K. Stillman, a physician; signed the papers incorporating the Marine Historical Association, today known as Mystic Seaport. Their dream: create a dynamic, educational institution to preserve America’s maritime culture–and turn the achievements of a past era into an inspirational force for the future.

Despite the economic conditions of the Great Depression, Mystic Seaport grew rapidly. Donations of logbooks, photography, ships plans and other maritime artifacts poured into the one-building museum. In 1941, Mystic Seaport acquired the Charles W. Morgan, the country’s last wooden whaleship from the once-great Yankee fleet. Historic buildings from across New England were also moved in to complement the Morgan–and the authentic coastal village area of Mystic Seaport was born.

Over the next 50 years, Mystic Seaport experienced explosive growth, amassing the world’s largest collections of maritime photography (over 1 million images) and boats (nearly 500), as well as collecting two million other maritime artifacts. And the 1970s saw the creation of the Henry B. duPont Preservation Shipyard, additional exhibition buildings and several new accredited educational programs.