This art deco theater opened in the 1930s and operated until 1990. Rather than see the historic theater demolished, the city purchased and renovated the theater. The restored theater opened in 1993 and continues to operate, offering a variety of vintage and rare films along with community programming. 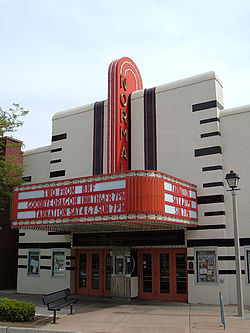 The theater was built in 1937 by Sylvan Kupfer, a local attorney, and his wife Ruth to bring the entertainment and comfort of movies to Depression Era Normal.  Designed by Arthur F. Moratz, who also created the art deco styled Holy Trinity Catholic Church in Bloomington, it was a marvel of Art Moderne architecture.  It was a small theater for the time, only fitting six hundred people, but it did have the distinction of being the first movie theater in the area built for sound.  The theater opened on November 19, 1937 with the movie comedy musical "Double or Nothing" starring Bing Crosby, and went on showing countless other movies for many more decades afterward.  During that time the only change to the structure of the theater was the inside being split in half in 1985 to allow for two screens.  In the late 1980s, movie audiences for the theater began to thin out, and the theater officially closed its doors in 1990.  However, the city of Normal bought the theater a year later and renovated it.

The Normal Theater is now a community theater that is also on the National Register of Historic Places.  The interior has been restored to its original one screen and art deco design.  Musicals, concerts, and classic films are shown at the theater throughout the year.  Film festivals are often held at the theater ranging in subject from holiday films to Academy Award nominated-shorts.  Call or go to the theater's website for a schedule of events and movie showings.